The coronavirus crisis spotlights the inequalities in American education 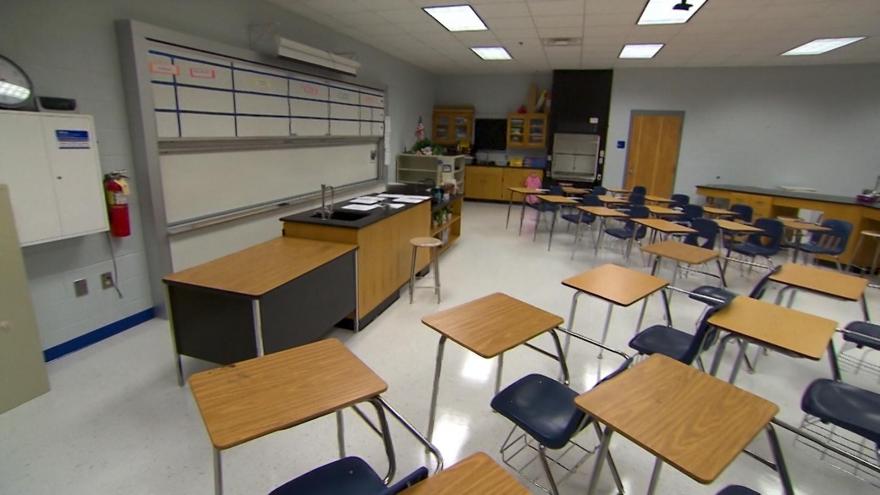 A classroom is empty during the coronavirus pandemic, which has forced teachers and students to adjust to virtual learning.

(CNN) -- In the month since his school shut down, Lewis Echevarria says he's had one tool to keep up with his seven classes.

Echevarria, originally from Puerto Rico, has to jump through multiple hoops each day to submit his work: overcome an often bad internet connection, catch up on assignments on a palm-sized screen and find the answers to questions his parents -- who both speak little to no English -- can't answer.

Echevarria is one of millions of students that lack access to the basic tools they need to continue their education from home, now that schools all over the country have closed down and more than a dozen states have announced classes will remain virtual through the end of the school year.

Many don't even have access to internet. Data from the National Telecommunications and Information Administration showed that in 2017, about 7 million school-age children were in households without home Internet service.

Katrina McCombs, the state superintendent of the Camden City School District, says the district's poverty rate is nearly 96%. The population in Camden is 42.4% African American and 50.3% Latino, according to 2019 census estimates.

"If there is any trauma that is inflicted upon the larger society in America, then our children of color ... seem to feel it worse," McCombs said.

Less than 30% of their students' households have access to internet and electronic devices, she said.

"This Covid-19 crisis has accelerated our ability to be able to get Chromebooks and internet access into the hands of some of the most vulnerable children in the United States. That should have already been the case, but it wasn't." McCombs said.

But many students aren't just taking a hit from their inability to log on to class. Children from communities of color or low-income neighborhoods often depend on their school for a lot more.

What these students need

Echevarria, who was selected as a student representative for his school, is tasked with representing the student body and their concerns to school and district officials. But the challenges he's now facing represent many more students --- all over the country.

But now his questions are delivered in the form of emails. An often unreliable internet connection means he may not get an answer in time and submit an assignment late or fall behind in a class.

"It's just gotten to the point where I don't even want to do it," he said. "I just don't want to do it on my phone and (instead) just write it on a piece of paper. That way I don't have to switch from screen to screen."

The Camden City School District has used nearly $400,000 in donations to order Chromebooks for students like Echevarria and others who have no devices at all, the superintendent said.

"We're looking at a situation where our students have to rise above many more obstacles than maybe some of their ... suburban counterparts," McCombs said.

"This is a private school that has lots of resources," he says. "So we're extremely fortunate, which is very different than the situation where, especially in large public schools systems like New York City, where the resources are not there and it's much more difficult."

But it's not just laptops that districts of underserved communities have been tasked with providing. McCombs says 100% of her district's students and their families qualify for free or reduced lunch prices, she says.

More than 20 million students rely on free school meals each day, according to the US Department of Agriculture, which oversees the country's school nutrition programs. To help keep food on the table, some schools have opted for drive-through programs providing students with bagged meals.

In New York, Mayor Bill de Blasio said mid-March the decision to close schools was a difficult one because "there are so many parents that depend on our schools for meals for their children."

"To me, that's the greatest indictment of American society that I can possibly fathom," Sclar said about those schools not closing earlier. "You've actually perpetuated the public health crisis out of concern that the kids aren't going to eat. It means we're way, way behind in understanding how serious the problems are in our country."

In March, New York City's public schools announced they would be providing students three grab-and-go meals a day, which would be available in over 400 locations.

Similar takeout methods have been adopted by schools all over the country, who continue to provide meals for their students.

How communities have stepped up to help

As the crisis continues to unveil long-term questions and deep divides, schools are working with private companies, nonprofits and internet providers willing to equip families with what they need.

And internet providers have since stepped up to offer free Wi-Fi connections to students' households without one, according to the affiliate. About 22% of New York State households did not have internet access in 2018, the news station reported.

In Texas, one school district deploys more than 110 school buses equipped with Wi-Fi to neighborhoods that officials identified as having a need for internet access, CNN affiliate KPRC reported.

In Seattle, Amazon announced last week it was donating 8,200 laptops to families in need in the Seattle Public Schools system. And in Pittsburgh, nonprofit Neighborhood Allies launched an initiative to raise money for laptops for thousands of students.

"However this plays out in the sort of immediate effects to people, really all it does is demonstrate the profound inequality that already exists in this society," Sclar says. "It needs fundamental change. This should be an opportunity to look and see ... what can and what should be done."