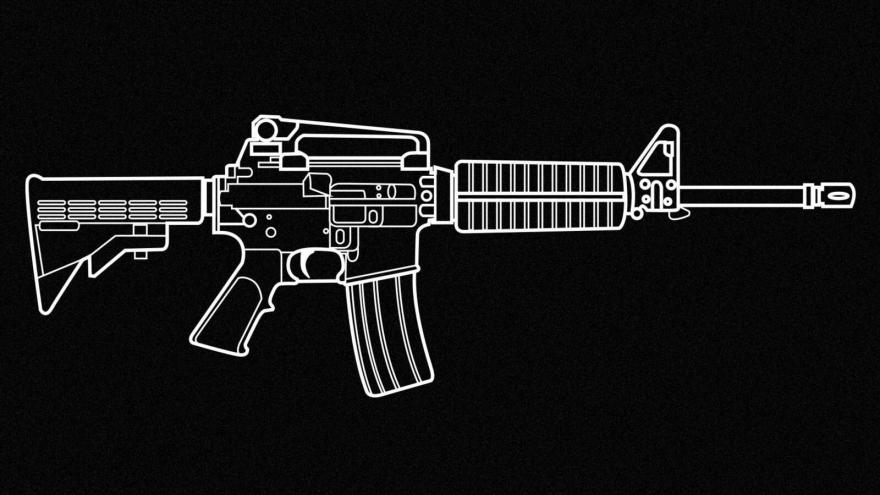 (CNN) -- The 21-year-old suspect in Monday's massacre at a Boulder, Colorado, supermarket allegedly used a Ruger AR-556 pistol -- what one expert called "a semiautomatic made for combat" that is easy to carry and has "the firepower of a long gun."

Ahmad Al Aliwi Alissa purchased the weapon six days before the shootings in which 10 people were killed, according to his arrest warrant affidavit. The weapon had been modified with an arm brace, according to a law enforcement source.

The Ruger AR-556 is a type of AR-15, the military-style rifle that has been used in many other mass shootings. The pistol version is essentially the same weapon as the rifle but with a shorter 10.5 inch barrel and an adjustable stabilizing brace on the back "to aid in accuracy, balance and recoil management," according to the Ruger website.

"The AR-15 platform weapon -- whether it's in a long gun or pistol -- essentially has the same firepower. It's a semiautomatic made for combat," said Timothy D. Lytton, a gun industry expert at Georgia State University.

"The AR-15 pistol is almost sort of a novelty. Essentially it's the same firearm but with a much shorter barrel, and with a shorter stock, and it's a smaller weapon. So the same way some people might want to drive a sports car because they like the feel of the compactness and the sort of speed, they take essentially a combat weapon or a combat-style weapon and they shrink it all down into sort of a miniature version."

'You can stick the thing under a jacket'

The AR-15 was designed for the U.S. military in the 1950s. It was invented by Eugene Stoner, who worked for a company called Armalite, which is where the AR originated. The number 556 refers to the caliber -- 5.56 millimeters.

"So the shorter barrel and shorter stock make a smaller weapon that would make it more easy to carry around," Lytton said. "It would certainly make it more concealable. You can stick the thing under a jacket in a way that would be hard to sort of stick an AR 15 platform rifle under your jacket."

AR-15s are usually semiautomatic, meaning one bullet is fired every time the trigger is pulled. They are loaded with magazines that automatically feed bullets as the gun is fired.

Magazine capacity varies, usually starting at 10 rounds -- the legal limit in some states -- but sometimes holding 30.

In 2018, the city of Boulder, Colorado, passed a ban on the sale and possession of assault weapons and large capacity magazines. Earlier this month, a state district court judge blocked the city from enforcing its ban.

AR-15-style rifles have been used in some of the most deadly mass killings in recent US history, including the 2012 shooting inside a movie theater in Aurora, Colorado, that left 12 people dead.

An AR-15-style rifle was also the weapon a former student used to slaughter 17 people at Marjory Stoneman Douglas High School in Parkland, Florida. The Parkland shooting is among the shootings listed in Boulder's ordinance banning assault weapons.

'It's not your normal pistol'

Colorado state law does not include the type of firearms that Boulder was trying to ban -- semiautomatic rifles that can accept a detachable magazine and have a pistol grip, folding or telescoping stock, or any device allowing the weapon to be stabilized with the non-trigger hand -- under its list of illegal or dangerous weapons.

"You know enthusiasts like it because as they like to say it's a sort of a fire breathing type of weapon at the range," Lytton said of the AR-15 pistol.

"It's not your normal pistol. It's got the firepower of a long gun. And also because, in some states, it is classified as a handgun. It wouldn't be subject to restrictions on short barrel long guns... There's a certain amount of debate about what the status of the weapon is but one could imagine that it could be qualified as a pistol and as a pistol it wouldn't be subject to sawed off shotgun regulations. You can't take a regular AR-15 in many states and just saw off the muzzle and walk around with a concealable long gun. This allows you to basically just have a shorter muzzle and do the same thing."

AR-15s and similar military-style rifles like AK-47s are often referred to as assault rifles or assault weapons, though members of the gun industry prefer to call them modern sporting rifles, or MSRs.

These guns were restricted by federal law for 10 years, until the so-called assault weapons ban expired in 2004. That ban restricted certain components of the gun, like the pistol grips and bayonet lugs, and limited magazine capacity to 10.

Gun enthusiasts are fans of the AR-15

The versatility of the AR-15, including flash suppressors, pistol grips and even bayonets -- makes it popular among gun enthusiasts.

"If you want to build a rifle then you take an AR-15 frame and put a long barrel filter stock on it," said Daniel G. O'Kelly, director of the Dallas-based International Firearm Specialist Academy and former agent with the Bureau of Alcohol, Tobacco, Firearms and Explosives.

"If you want to build an AR-15 pistol you just put a pistol grip and a short barrel on it. And as a result of those features it will be classified, according to the federal definitions, as a pistol instead of a rifle."

O'Kelly said there of hundreds of AR-15 makers in the US. It is the most popular rifle in the country.

"It's modular and you can modify it to suit your own needs or taste," he said.

"All of the features are snap on, snap off. So you can change calibers, barrel length, type of grip, type of shoulder stocks, type of sights... I don't know I could name a toy -- it would probably sound silly -- but there are toys out there that probably have been popular with kids because of all the accessories you can get to change it or accessorize it and make yours, unlike any other. That's a big part of the allure."