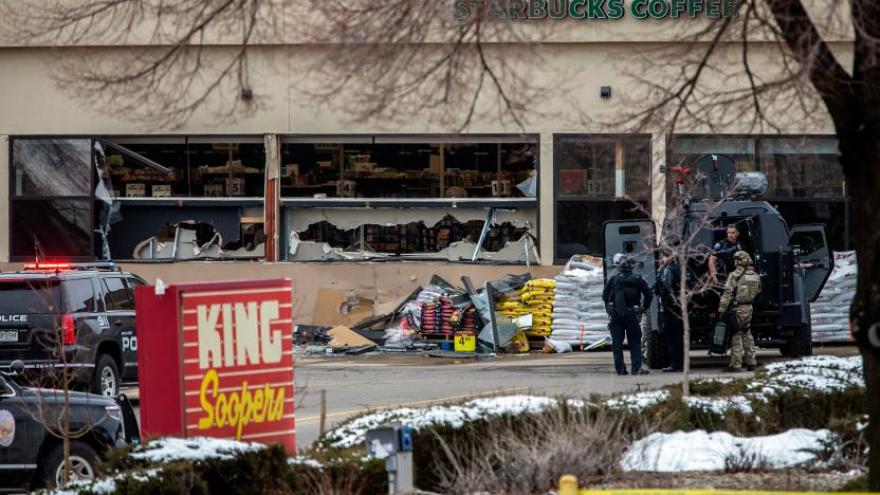 The mass shooting at a supermarket in Boulder, Colorado, on Monday took place less than a week after eight people were killed in a series of attacks on spas in Atlanta.

(CNN) -- The mass shooting at a supermarket in Boulder, Colorado, on Monday took place less than a week after eight people were killed in a series of attacks on spas in Atlanta.

The two incidents are likely to spur discussion about gun control legislation in the United States, where firearm deaths are tragically common.

They are also among at least seven mass shootings in the past week across the United States -- including three incidents on Saturday alone.

CNN defines a mass shooting as: a shooting incident which results in four or more casualties (dead or wounded) excluding the shooter(s).

Five people who were preparing a vigil in Stockton, in California's Central Valley, were shot in a drive-by shooting, the San Joaquin Sheriff's Department said. None had life-threatening injuries.

Four victims were taken to the hospital after a shooting in the city east of Portland, police said in an initial report.

Five people were shot after a disturbance inside a club, according to police. One was in critical condition after being shot in the neck, the rest were in stable condition, according to CNN affiliate KPRC.

Eight people were shot by an unknown assailant, one of whom died, according to police.

One person was killed and another five were injured during a shooting at an illegal party, CNN affiliate KYW reported. "There were at least 150 people in there that fled and believed they had to flee for their lives," Philadelphia Police Commissioner Danielle Outlaw said.

Ten people, including a Boulder police officer, were killed in a shooting at the King Soopers supermarket, according to police.

It's unclear how this number of mass shootings compares to an average week in the US.

Though some official gun violence data is available, the US federal government does not have a centralized system or database to track firearm incidents and mass shootings nationwide. According to the Centers for Disease Control and Prevention, which tracks some gun violence data, nearly 40,000 people were killed in incidents involving firearms in 2019