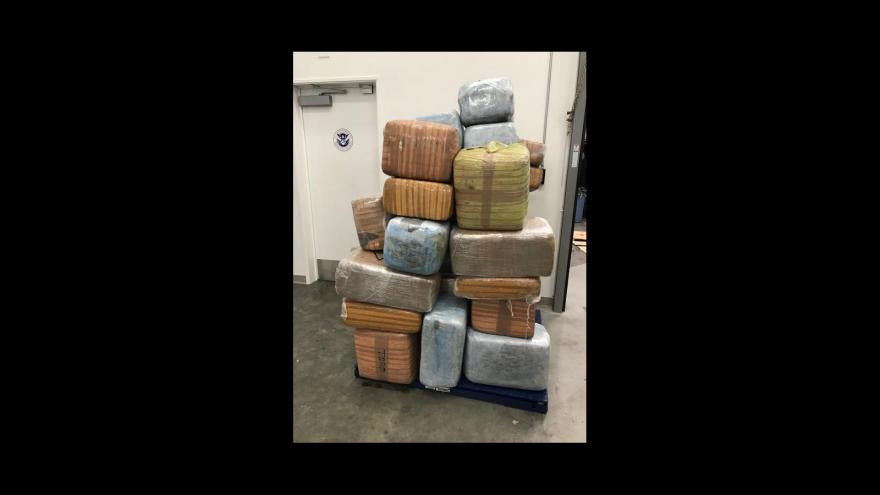 About 1,300 pounds of marijuana was seized on Tuesday.

(CNN) -- The US Coast Guard said it and its partner agencies recovered 1,300 pounds of marijuana wrapped in plastic from the water near Santa Catalina Island, one of California's channel islands southwest of Los Angeles, this week.

The 43 bales were transferred to Customs and Border Protection, which estimated the value at $1 million.

A civilian "reported multiple bales of what the caller believed to be narcotics floating" in the sea, according to the Coast Guard.

The Coast Guard said authorities don't know where the bales came from -- or who is responsible. The case is being investigated by Immigration and Customs Enforcement's Homeland Security Investigations and the Coast Guard Investigative Service.

Petty Officer 3rd Class Aidan Cooney, a Coast Guard spokesman, said that when contraband is turned over to Customs and Border Protection, it is usually documented, preserved as evidence in the case of a prosecution or investigation, and eventually destroyed.

The seizure is just one of many over the past month.

In July, the Coast Guard shared a video of personnel jumping onto a moving submarine carrying 17,000 pounds of cocaine in the eastern Pacific Ocean.

A few weeks later, the Coast Guard seized 26,000 pounds of cocaine worth $350 million in several operations in the eastern Pacific, including one that involved a high-speed chase with suspected drug smugglers.

Cooney said the Coast Guard has had 10 at-sea marijuana seizures weighing 5,745 pounds this year in the California coastal region. Last year, there were 11 seizures totaling 5,872 pounds.

The Coast Guard encourages anyone who sees suspicious activity on the water, signs of distress or hazards to navigation to report it.

Clarification: This story has been updated to reflect that the marijuana seizures referenced by Petty Officer 3rd Class Aidan Cooney occurred in the California coastal region.