The Cleveland 'Indians' sign is coming down, signaling the end of the controversial name 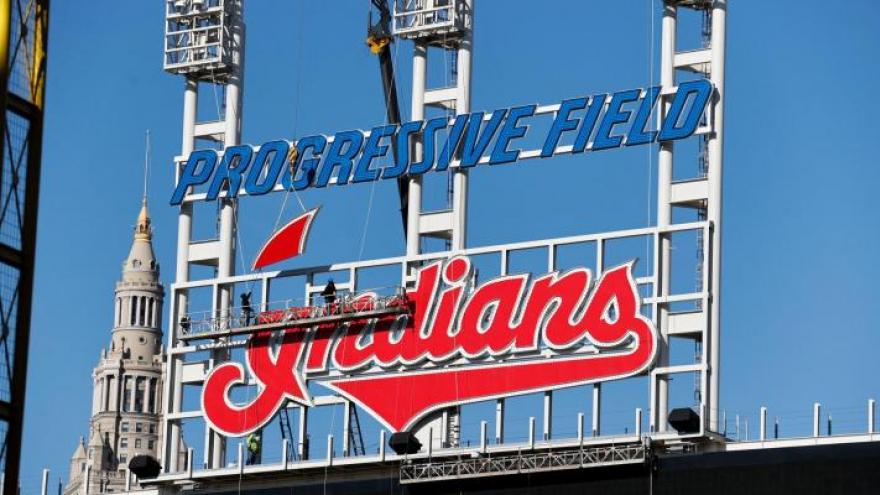 The "Indians" sign atop the left field scoreboard at Progressive Field that Cleveland baseball fans have known since 1994 started to come down Tuesday.

(CNN) -- The "Indians" sign atop the left field scoreboard at Progressive Field that Cleveland baseball fans have known since 1994 started to come down Tuesday.

The city's Major League Baseball team, which is in the process of changing its name and brand to the Guardians, said crews will spend the next several days removing the 80-foot aluminum sign. New LED lights were recently added to the Indians sign, the team said.

The team decided in December 2020 to change its name, which it considered insensitive to Native peoples. The moniker drew criticism for decades from Native Americans. On July 23, the team announced that it would change its name to the Guardians starting next season. The team was known as the Indians for more than 115 years.

"We acknowledge the name change will be difficult for some of us, and the transition will take time," team owner Paul Dolan said at the time. "It is our hope and belief this change will divert us from a divisive path and instead steer us towards a future where our fans, city, and region are all united as Cleveland Guardians."

In a video taken by CNN affiliate WEWS, workers on a raised platform dismantled the top portion of the letter "I," which was fully removed as of Tuesday.

While the Guardians work on designing a newly rebranded sign for the stadium, the "Indians" sign will be stored at Brilliant Electric Sign Company, according to WEWS.

The team joined the NFL's Washington Football Team in moving on from a name referencing Native Americans -- Cleveland previously removed its logo of "Chief Wahoo" from uniforms following the 2018 season.

Although the club will retain its colors, it will adopt the name Guardians because of Cleveland's Guardians of Traffic statues that adorn the city's Hope Memorial Bridge. The team surveyed 40,000 fans and conducted 140 hours of interviews before settling on the new name. It will be the franchise's fifth name, following the short-lived Blues, Bronchos and Naps.

Like Cleveland, the Atlanta Braves have also received criticism over the years for its name, which was first used by the team in 1912 to reference a Native American warrior.

Many have also criticized fans' use of the "tomahawk chop," a game day tradition since 1991, considered offensive to many Native Americans. The Braves, who won the World Series Tuesday night against the Houston Astros, said last summer they were reviewing the chop amid calls from the Native community.

MLB Commissioner Rob Manfred defended the Braves' name and symbol last week. He noted that the Native American community in the Atlanta region is "wholly supportive of the Braves program, including the chop. For me, that's the end of the story." Many tribal and Native groups, though, have recently advocated for removing the team's symbols and mascots.

In 2019, the Braves organization announced it was taking steps to "reduce" the tomahawk chop after St. Louis Cardinals player Ryan Helsley, a member of the Cherokee Nation, called it disrespectful.

Little has been said about when the Cleveland team will officially start calling itself by the new name, or when the new sign will be built and put up. Through the end of the 2021 season, the players' uniforms and the team's social media were still using the Indians branding. Progressive Field will host the first home game of the Guardians on March 31, 2022.

In September, the team submitted a new scoreboard sign for approval by the Cleveland Planning Commission, according to WEWS. The sign will be made of fabricated aluminum letters mounted on the existing scoreboard and painted red with a white border. The border will include exposed white LED lamps to light up the sign at night.

Alongside the removal of the sign, Progressive Field is set to receive $435 million in renovations and improvements as a result of a newly extended lease that goes through at least 2036, according to WEWS. This will include a redesign of the upper deck concourse and construction on a larger dugout-level social space.