The charges against 4 officers involved in George Floyd's death, explained 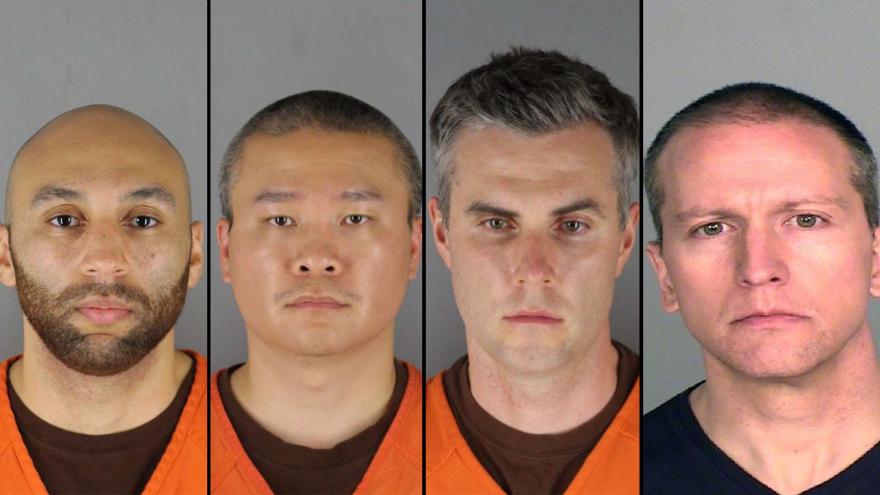 A split screen of the four officers charged in George Floyd's death.

(CNN) -- Now that prosecutors have charged all four officers involved in the arrest that ended in George Floyd's death, their real work begins: proving them.

The charges against Derek Chauvin, the former officer who kept his knee on Floyd's neck for almost nine minutes, were expanded this week to include the more serious one of second-degree murder.

This was added to charges of third-degree murder and second-degree manslaughter.

Second-degree murder and aiding and abetting that crime carry a maximum penalty of 40 years, while the maximum is 25 years for a third-degree murder conviction.

A manslaughter conviction carries a maximum sentence of 10 years in prison, as does aiding and abetting manslaughter.

To prove third-degree murder, prosecutors have to show that Chauvin carried out "an act eminently dangerous to others and evincing a depraved mind," without intent to kill, but without regard for life.

With a second-degree murder charge, prosecutors would have to prove the intention to kill or that the person caused a death while committing another felony crime.

CNN legal analyst Elie Honig points out that Minnesota Attorney General Keith Ellison was smart in adding that he intended to prove what is known as "felony murder."

According to Honig, the publicly available evidence appears to be enough to sustain the second-degree charge. In videos, Floyd can be heard saying he can't breathe, and "They're going to kill me, man," and "Don't kill me."

In one video, Chauvin kept his knee on Floyd's throat for two minutes and 53 seconds after Floyd became unresponsive.

Leaving the third-degree murder charge against Chauvin is a fallback. If Chauvin isn't convicted on the second-degree charge, he could still be convicted of the lesser one.

Prosecutors will have to prove something called depraved indifference for Chauvin to be convicted of third-degree murder.

"That means you disregarded the risk and did something that was so dangerous that you knew death could potentially occur," said Joey Jackson, a CNN legal analyst and criminal defense attorney.

The charges of aiding and abetting against the other three officers are just as serious in Minnesota as committing the crime, Honig wrote, but it may be harder for prosecutors to convict them, "because Chauvin's conduct is more direct and will be more palpable to a jury."

Prosecutors need to prove that they "knowingly assisted Chauvin, even in some small way."

Honig points out that a video posted on social media appears to show three officers kneeling on Floyd.

All four former officers are being held on bail of $1 million each.