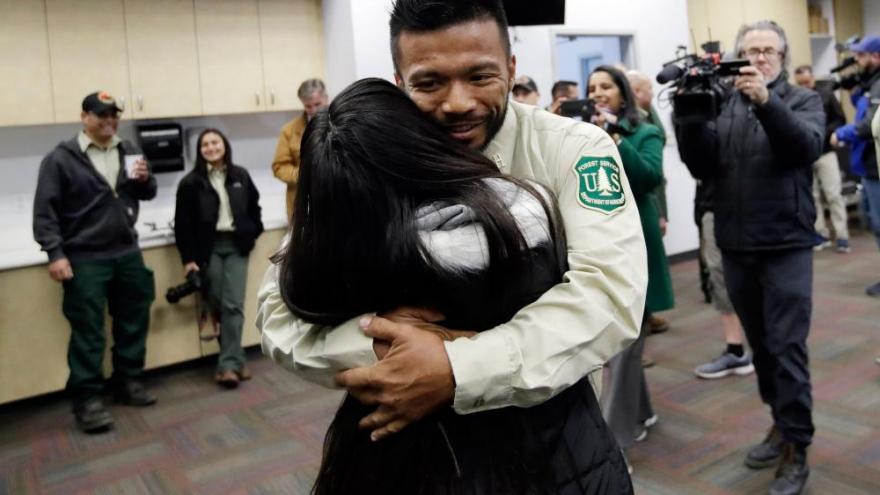 Capt. Leonard Dimaculangan hugged his daughter for the first time in a month after battling flames halfway across the world in Australia.

(CNN) -- Capt. Leonard Dimaculangan hugged his daughter for the first time in a month after battling flames half way across the world in Australia.

"I'm glad that he gets to help me with my homework now," Dimaculangan's daughter, Promise, joked.

Dimaculangan and 19 other firefighters with Angeles National Forest returned to California on Wednesday after they volunteered to help contain the devastating bushfires in Australia.

While the firefighters created fire break lines and cut down or cleared burned trees as they have done many times back home, they had to learn how to handle burning eucalyptus trees and the lingo of their counterparts.

"The dead standing trees are called 'snags' in California and in Australia they call them 'stags,'" Dimaculangan explained at the homecoming, held at the Los Angeles Fire Department's Station 5.

Since the fire season began in late July, large swaths of Australia have been devastated by the worst bushfires in decades.

More than 20 people have been killed and millions of acres of land have been seared. New South Wales is the worst-affected state, with thousands of homes destroyed or damaged.

Thousands of paid and volunteer firefighter have been working around the clock as they battle the brushfires. Late last year, the United States joined an international effort to support them.

"They are very professional. They know their business, they know the work that needs to be done and much of their strategy and their performance is similar to ours," said firefighter Jonathan Merager.

Merager's wife, Starlyn, was happy to see her husband unharmed because "anything could have gone wrong."

On every call and text to her husband, she would constantly remind him to be smart and keep "one foot in the black."

"It means to keep one foot in the area that's already been burned. If the fire starts coming down on you, you can quickly get in the burned area, so you don't get burned over," Starlyn Merager said.

It's not the first time the countries have helped each other out. Australia and New Zealand have been sending firefighters to the United States for more than 15 years, the US Forest Service says.

In 2018, nearly 140 firefighters from Australia and New Zealand were deployed to California, Oregon and Washington for nearly a month. They relieved exhausted firefighters battling the deadly Carr fire near Redding, California, and assisted with helicopter operations. The last time US firefighters worked in Australia was 2010.