The Bobcat Fire is one of the largest in Los Angeles County history after scorching more than 100,000 acres 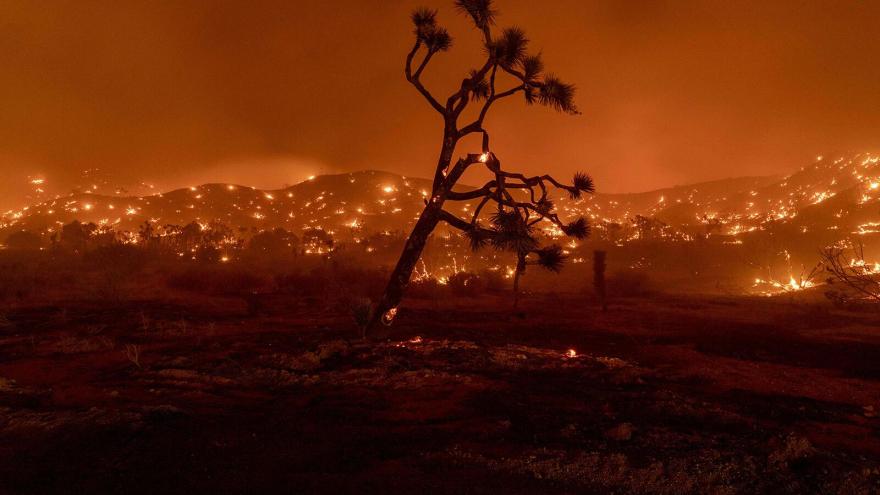 A Joshua Tree burns during the Bobcat Fire in Juniper Hills.

(CNN) -- The Bobcat Fire in Los Angeles County has scorched more than 100,000 acres as of Monday, making it one of the largest fires in the county's history.

It is one of at least 27 major wildfires currently burning in California, where 26 people have died and 6,400 structures have been destroyed since fire activity picked up in August, the California Department of Fire Protection (Cal Fire) said.

Nearly 19,000 firefighters are battling the blazes.

Cal Fire urged residents to stay vigilant as "the most devastating wildfires" typically happen in September and October.

The Bobcat Fire had burned 105,345 acres and was 15% contained as of Monday, according to an update from the Los Angeles County Fire Department.

A smoke advisory is in effect for parts of the county.

It is one of the largest wildfires in Los Angeles County history. The largest, the Station Fire, torched 160,000 acres in 2009.

The cause of the Bobcat Fire, which started on September 6, is still unknown. More than 1,700 fire personnel are battling the blaze.

"California historically experiences some of the most devastating wildfires in the months of September and October. Do not let your guard down!" emphasized Cal Fire.

Several flare ups were confirmed by fire agencies in the northeast and southwest quadrants of the fire on Sunday, with wind gusts of up to 30 mph and low humidity creating the possibility of extreme fire behavior through Monday night, the National Weather Service Los Angeles office said.

New evacuations were ordered over the weekend while other evacuations and warnings remain in place for several areas, the Los Angeles County Sheriff said on Twitter.

One of the flare ups Sunday was at Chantry Flat, above the foothills east of Los Angeles.

Los Angeles County Fire spokesman Sky Cornell told CNN on Sunday that there was a big push Saturday to put in containment lines around the fire.

"They (fire crews) knew if they could push hard through the night it would make a big difference on the fire. They were successful in an aggressive fire attack through the night putting in containment lines in multiple areas," Cornell said.

Cornell said much of the northern spread of the Bobcat Fire was into high desert flatlands, much easier terrain to battle wildfire than the steep hills and deep canyons of much of the Angeles National Forest, where the blaze has already burned.

"But we're never out of the woods. We never let our guard down. We're seeing some wind pick up today and that's our number one concern," he said.

One hotspot that flared up was near the Devil's Punchbowl Nature Center, which was temporarily closed.

The natural area and facility of the Devil's Punchbowl has been burned by the fire, a news release from the Los Angeles County Department of Parks and Recreation said Sunday.

"The area is still considered a hotspot and not safe," the release said. "The facility will be closed until further notice."

Animals from the sanctuary were evacuated earlier this week, according to the release.