The black women who did NASA's math used to be hidden. Now the street in front of its headquarters is named for them 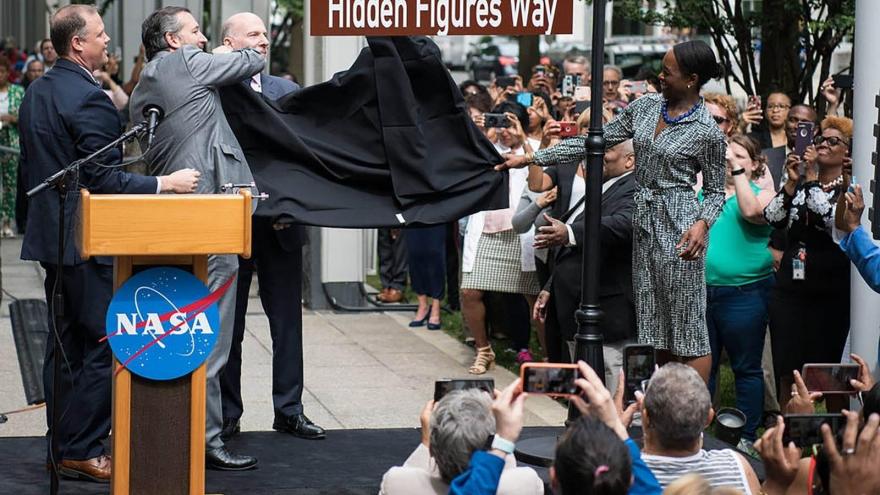 The Hidden Figures Way street sign is unveiled at a dedication ceremony at NASA headquarters in Washington.

(CNN) -- For decades, the contributions of the black, female mathematicians who helped get NASA astronauts into space stayed essentially hidden.

Not anymore. Now, you'll be reminded of what the women did even before you pull into NASA headquarters.

That's because the street on which the building sits has been renamed Hidden Figures Way.

The new name honors the work of Katherine Johnson, Dorothy Vaughan, and Mary Jackson, the so-called "human computers" who did the complex calculations that made space travel possible.

In the 1950s, before computers were widely used and trusted, human mathematicians were called "computers." And NASA's "computer pool" relied heavily on the extraordinarily complex, handwritten calculations of its black women employees.

The world didn't fully learn of this incredible story until 2016, when the best-selling book and popular movie "Hidden Figures" were released.

"I just want to say these were the three hidden figures in a very prominent book that became a magnificent movie that started a movement that brought all of us here today," NASA Administrator Jim Bridenstine said in a ceremony Wednesday to unveil the new street sign. "Here we are, 50 years after the landing of the Apollo 11 Moon lander, celebrating those figures who were, at the time, not celebrated."

The families of Johnson, Vaughan and Jackson were on hand for the ceremony, as was Margot Lee Shetterly, the author of "Hidden Figures."

"Naming this street Hidden Figures Way serves to remind us, and everyone who comes here, of the standard that was set by these women, with their commitment to science and their embodiment of the values of equality, justice and humanity," Shetterly said.

"But let it also remind us of the Hidden Figures way, which is to open our eyes to (the) contribution of the people around us so that their names, too, are the ones that we remember at the end of the story."

Johnson is 100 years old and lives in Virginia. NASA earlier this year renamed its Independent Verification and Validation Facility in her honor.

Vaughan became an expert computer programmer and contributed to the Scout Launch Vehicle Program before retiring from NASA in 1971. She died in 2008.

Jackson worked with flight test engineers and eventually became an engineer herself. She later moved into administration and took a job in NASA's equal opportunity office, overseeing affirmative action programs and career development for women. She died in 2005.