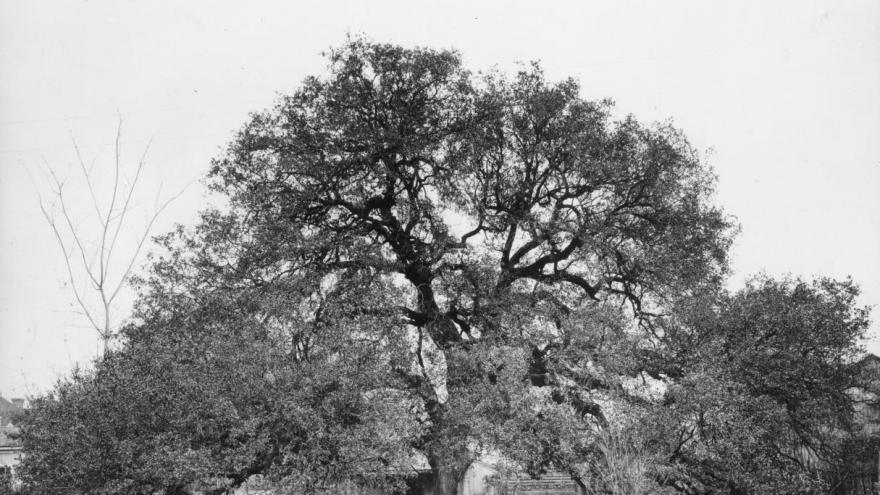 In this 1939 photo, Treaty Oak in Austin, Texas, stands near the west bank of the Colorado river. The oak is thought to be nearly 600 years old.

(CNN) -- In May 1989, a bizarre murder attempt in Austin, Texas, gripped the nation and made worldwide news. The details of the case were unusual, and unlike anything police had seen before. The victim? Austin's oldest resident, a nearly 600-year-old tree known as Treaty Oak.

Treaty Oak is a spectacular specimen. It is centuries older than the city it resides in and stretches out to a spread of nearly 100 feet. In the 1920s, the American Forestry Association named the Treaty Oak the most perfect specimen of a tree in North America. And thanks to a citywide fundraiser in the 1930s, the tree even owns the park it lives on.

"Certainly there are not many trees, not just in Austin or in Texas, but in the world, that own their own land," said John Giedraitis, Austin's first city forester.

When Giedraitis took on his role as a forester with the parks department in 1985, he was well acquainted with the Treaty Oak.

"Well, certainly we had several historic trees in Austin ... but the most important tree was Treaty Oak," he said.

Native American tribes, including the Tonkawa and the Comanche, believed the tree was sacred. Students would take field trips to the Treaty Oak every year, and residents found shade and comfort under its cover during the heat of the summer. And for Giedraitis, the tree holds an even closer place in his heart.

"When I decided to propose to my wife, I proposed under the Treaty Oak," he said.

So, when evidence of criminality against the tree surfaced, Giedraitis could not understand why anyone would harm such a beloved piece of Texas history.

The first shreds of evidence

In 1989, Giedraitis was hosting a group of state foresters from across the country and took them on a tour of Austin's parks. When they got to Treaty Oak, they noticed dead grass on the ground surrounding the tree.

"I just assumed it was a parks employee that got a little sloppy," said Giedraitis. "I didn't give it a second thought."

Months later, the tree continued to deteriorate, and the leaves began to show symptoms of chemical poisoning or herbicide.

"So right away we dug up some of the soil and took some tissue samples, set it off to the laboratory," Giedraitis said. "A week or two later, we got the results back that the Treaty Oak had been poisoned."

The poison detected was a powerful herbicide known as Velpar, manufactured by the chemical company DuPont, and usually used to kill hardwoods on pine plantations.

"We knew that it was an intentional poisoning, and that's when the fun started," said Giedraitis.

The poisoning makes headlines around the world

As far as Giedraitis knew, no one had ever tried to solve a problem quite like this before. It began to make national, and international, news.

"It became the most famous tree in the world," Giedraitis recalled. "Front page of the Times, it was in Sports Illustrated, People magazine, National Geographic, was on all the networks."

People from all over the world became invested in the case. "People started hearing about it, and one of the people to hear about it was H. Ross Perot," remembered Giedraitis.

Perot was a billionaire and business magnate based in Texas. He offered to help with the expenses of the investigation.

"He came to us and said, 'Whatever it takes, however long it takes ... you just send me the bill.'"

With Perot's blank check at hand, Giedraitis and his team went on to call every expert and scientist in their Rolodex.

"We called the experts in, pretty much all of them that were familiar with the way that this compound works on trees said that this is a dead tree, that it will not survive," Giedraitis said

That didn't stop them from doing everything in their power to save it — injecting the tree with salt to move poison off the tissue and sugar to spur leaf production, creating large barriers for shade from the sun, and sprinkling the tree with fresh spring water.

While they were trying to move heaven and earth, the police were on the case to find the culprit.

A former undercover cop takes on the case

When it was first reported that Treaty Oak had been vandalized, the Austin Police Department thought it was a joke.

"I think a lot of folks viewed it as being beneath the dignity of the office," said John Jones, a now-retired detective for the city's police department.

At the time, he was brand new to the job. After 13 years of working as an undercover street cop, he had transitioned into the detective unit — and the Treaty Oak was one of his first cases.

"'Criminal mischief,' is what the title was," Jones remembered. "The Treaty Oak was the, quote unquote, 'victim.' They thought that was just hilarious."

Jones himself wasn't too tickled at the beginning. "I thought I'd be able to go, 'Oh, no suspects, no nothing,' file it away," he said.

But the case became bigger than he could have ever imagined. "Everybody was interested in it," Jones said.

Still, there wasn't a whole lot of evidence for him to work with, no witnesses, no surveillance camera footage, no traces of DNA. Then the Austin Forestry Service and DuPont offered up a joint $11,000 reward, and people got to talking.

The case becomes an international sensation

"I was fielding phone calls from Tokyo, from England, from Canada," Jones said. "We were just getting calls all over the place."

For people in Austin, and the world over, the news of the Treaty Oak's poisoning hit hard.

"There was a parade of people, hundreds, thousands of people came by that heard about it in the news," Giedraitis remembered. "They left chicken soup, Maalox, they left Tums, they left nickels and dimes and dollars ... They mailed cards and letters from all over the world: 'Get well soon. We're praying for you.'"

"Whether it was evangelicals that came out there, or the Buddhist monks, the white witches, New Agers with the crystals — all these groups genuinely went there and tried to connect with the spirit to try to help it, to try and heal it."

With the support of the world behind him, Jones and the police began to close in on a lead.

As Treaty Oak continued to receive media coverage, a woman by the name of Cindy Blanco came forward, claiming to have information pertaining to the case.

Blanco was acquainted with a man named Paul Stedman Cullen, with whom she carpooled to a local methadone clinic. During their car rides, Blanco said that Cullen spoke about his love for his mental health counselor, who wasn't returning the same affections.

Blanco alleged that Cullen had searched for books on witchcraft, looking for an anti-love spell to mend his broken heart. Although the details of the ritual he chose remain unclear, Blanco claimed that Cullen believed that by killing a living thing, he would also be killing the love in his heart.

As Jones remembered it, "(Cullen) said, 'Well, let me pick the biggest thing around here and kill it. And as it decomposes, so will my love for her.'"

But without evidence or an admission of guilt, Jones could not make an arrest. So he pulled from his experience as an undercover cop to get the information he needed. With Blanco, he had the perfect informant.

"We wired her up, sent her out, and she gathered the evidence for us ... It was like putting a dollar in a jukebox."

"Based on what [Cullen] told her on the wire, we went and got an arrest warrant," Jones explained. "And then I went and got an evidentiary search warrant to search his residence, his truck."

At Cullen's home, police found a stack of books, covering everything from religion to quantum mechanics, a .22 caliber rifle, and dirt samples to test for Velpar.

With the mounting evidence against him, the trial seemed like an open and shut case. But because of a prior conviction, Cullen faced the possibility of serving life in prison.

While Cullen maintained his innocence throughout the case, his alleged admission of guilt on the tapes with Blanco became the damaging piece of evidence against him. He was found guilty and sentenced to nine years in prison.

Cullen served only three of those nine years. When he was released, he spent the remainder of his life in California, where he passed away in 2001.

A symbol of survival

Treaty Oak still stands on Baylor Street between Fifth and Sixth Streets, although experts were only able to save 35% of the tree. And while the oak still shows signs of the attempt to kill it — missing bark, branches that were removed — it never stopped growing. In 1997, it produced its first crop of acorns since the poisoning.

"The Treaty Oak is a powerful, powerful life force," said Giedraitis, who is now the executive director for the Texas chapter of the International Society of Arboriculture. "Everybody wrote that thing off ... almost 30 years later, that tree is doing better than it was when I first saw it in 1985."

More than anything, it has become a symbol of survival. As Giedraitis explained, "It survives because it follows the rules of nature, and it's good ... it just gives and gives and gives, it never takes anything back again."

Learn more about the Treaty Oak, including details surrounding the trial, in the latest episode of Great Big Story, a podcast by CNN about the surprising stories all around us.