The best books of 2021, according to global tastemakers 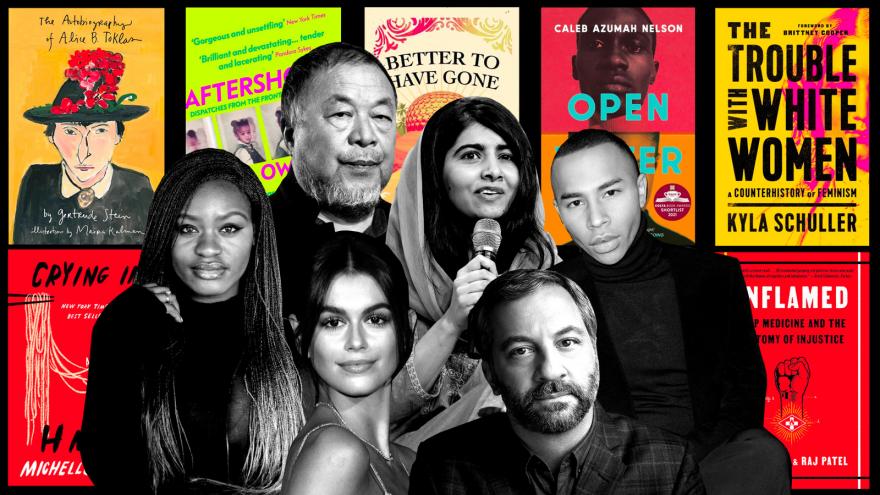 (CNN) -- The literary landscape has never been richer or more reflective of our present moment.

Compassionate depictions of the ongoing refugee crisis won Zanzibar-British novelist Abdulrazak Gurnah the 2021 Nobel Prize for Literature, while American writer Jason Mott took home the National Book Award for his novel on the racism, police brutality and the Black experience in the United States.

To help readers navigate the inexhaustible list of books published this year, we've asked influential tastemakers -- including writers, actors, photographers and creative directors -- to share their favorite reads of 2021.

Whether hard-hitting ruminations on the state of public health or a visual anthology of contemporary African artists, these are the books today's cultural heavyweights had glued to their nightstand.

Apatow -- whose filmography includes comedic touchstones such as "Superbad" (2007), "Bridesmaids" (2011) and "The King of Staten Island" (2020) -- recommends the memoir of another industry legend, Mel Brooks. His book, "All About Me," reveals behind-the-scenes anecdotes of life during the Golden Age of Show Business.

"Finally, the Mel Brooks autobiography all comedy nerds have dreamed of for so long," Apatow told CNN Style. "As the world stumbles into madness, we should all take a moment to read this book and appreciate the brilliant comedy and biting satire of our greatest American filmmaker. Sure, most people think drama is harder and fancier -- but it ain't!"

Glenn Lowry, director of the Museum of Modern Art

Lowry, an art historian and the director of MoMA since 1995, recommends "Better to Have Gone: Love, Death and the Quest for Utopia in Auroville," a personal memoir by Akash Kapur that chronicles the life of his in-laws, who met in a utopian community in 1960s South India.

"Written with insight and compassion, 'Better to Have Gone' takes us on the journey of the author and his wife as they seek to reconstruct the events that brought them together as children and then shaped their lives as adults," said Lowry. "At the same time, the book also explores the rivalries and tensions that defined Auroville's early years and what it means to try to create a utopian environment."

"One of my favorite books of this year is 'Aftershocks' by Nadia Owusu." Yousafzai told CNN Style. "This beautiful memoir tells the story of a girl who was abandoned by her mother at age 2 and orphaned at 13 when her beloved father dies. The story follows Nadia's life from growing up in Tanzania, Italy, Ethiopia, England, Ghana and Uganda to landing in Brooklyn as a young adult trying to create her own solid ground after a tumultuous childhood."

Malala first spoke out against the Taliban regime in 2008 when she delivered a speech denouncing the ban imposed on female education. She became a target and fled Pakistan in 2012.

"The book resonated with me as someone who shares the specific struggle of rebuilding their life in an unfamiliar country. But in reading 'Aftershocks' with my Literati book club, I found that many women in our group could relate to Nadia's struggle to define her identity and sense of home."

"It's a beautiful memoir about growing up Korean-American, finding identity and coping with grief," Gerber said. "Michelle recounts the last days she spent with her mother through a diary of food. This book is filled with so much emotion and raw honesty. A true exploration into the complexities of grief and the way we find connection in the sometimes unexpected little things. Heartbreaking and beautiful, this book has stuck with me every day since I read it."

The book is now set to become a feature film after Orion Pictures bought the rights this summer.

"The book I have been spending the most time with is a small art book from 2021," Tunick, who is best known for his expansive nude shoots involving hundreds of people, told CNN Style.

"It's not a narrative book but a pocket-sized compact art book that I keep by the side of my bed to get lost in thought and help me sleep. The book is of photographs, illustrations and paintings of hands. I have been very interested in small art books lately, that take the place of an iPhone or Instagram. The book is a talisman. The book as an object."

Tunick's most recent work took place at the Dead Sea in Israel.

Dissent Chinese artist Ai Weiwei recommends "Inflamed: Deep Medicine and the Anatomy of Injustice" by Rupa Marya and Raj Patel. The work is an interdisciplinary investigation into how structural inequality has a negative physiological impact on our health.

"The book is powerful and dynamic," said Ai, who has exhibited his controversial work at the Tate Modern in London, the Solomon R. Guggenheim Museum in New York City and the Louvre in Paris.

"As the book provides a lot of information, including new research results and historical materials, it makes readers eager to know more and have a more in-depth understanding of what the writer is really trying to say. It's very rich indeed, a bit like an encyclopedia about contemporary society, environment and medical language. It is very interesting."

Babalola received an advance copy of Caleb Azumah Nelson's "Open Water," a poetic ode to Black love that follows a young male photographer and female dancer in modern-day London, back in 2020.

"I found myself constantly returning to it this year," the British-Nigerian writer told CNN Style. "Not only is it richly written, with a sweeping lyricism propelling the narrative, but it is such a moving exploration of love, the discovering, the learning, the embracing.

"(Open Water) is a love letter to South London, and Blackness, not as a stolid phenomenon, but something that molds around our individuality, our humanity, our nuanced beauty. Despite often veering into darkness, it never strays too far from the light, from hope -- it is a message I carry with me about life itself, particularly in the midst of global turmoil. Very grateful for this book."

Rousteing, the creative director of luxury fashion house Balmain, recommends a new, painterly edition of the seminal text "The Autobiography of Alice B. Toklas" by Gertrude Stein.

Originally published in 1933, the book is considered the ultimate account of an American in Paris -- chronicling Stein and Toklas' avant-garde life as they rubbed shoulders with Pablo Picasso, Ernest Hemingway and Henri Matisse.

"This colorful re-edition of Gertrude Stein's classic, filled with dozens of fantastic illustrations by Maira Kalman, offered me the perfect escape from the anxiety that we all felt during the worst months of the pandemic, as Paris went through curfews and lockdowns." To celebrate a decade at the helm of Balmain, Rousteing has published his own graphic novel.

Vaid-Menon, a gender nonconforming creative, recommends "The Trouble with White Women: A Counterhistory of Feminism," an intersectional nonfiction work by Kyla Schuller.

"I'm a firm believer that we have to learn history to inform our future," Vaid-Menon said. "(This book) is a rigorous historical scholarship that couldn't be more timely. It's meticulously researched and phenomenally written in a relatable and even charismatic style. Each chapter compares a historical white feminist figure like Elizabeth Cady Stanton alongside an intersectional feminist peer from her time like Frances Harper.

"Instead of just critiquing the limitations of white feminism, Dr. Schuller highlights the expansive intersectional feminisms that have always existed alongside it. In this way, it's a hopeful and refreshing read that invites us to dream bigger and imagination more for feminism."

Sir Adjaye, the British-Ghanian architect who has designed notable buildings such as the National Museum of African American History and Culture in Washington, DC, recommends "African Artists: From 1882 to Now," a visual anthology mapping the continent's cultural contributions through more than 300 artists.

"(This book) presents the brilliant legacies of more than one hundred years of critical, cultural, sociopolitical and expressive engagement of and for Africa," Adjaye told CNN Style.

"This text surveys the meaning of art on the continent and demonstrates how expression itself is a deep entanglement not only with time, from the reckoning of modernism into the electric post-independence era, but the entanglement we as Africans have with our landscape. Our expression is our ability to tap into art's imaginative possibility -- the radical possibility of dreaming ourselves, our lands and our identity otherwise."

TV host and executive producer of the CNN original series "This Is Life with Lisa Ling," Ling recommends "In the Weeds" by fellow presenter Tom Vitale.

"I have had the pleasure of working with Tom on our HBOMax show, 'Take Out,' that will premiere in the beginning of next year along with Helen Cho," Ling told CNN Style. "Tom is brilliant, gentle and quite introspective. He recently penned a gripping and deeply personal book about traveling the world with the great Anthony Bourdain -- called 'In the Weeds.' Tom traveled to over 100 countries with Tony as his director and producer.

"His book details the utter frenzy and chaos of the shoots but also of his relationship with an incredibly complex but extraordinary man. The writing is truly sensational and visceral -- I feel like I was there. And now I need a drink, or two."