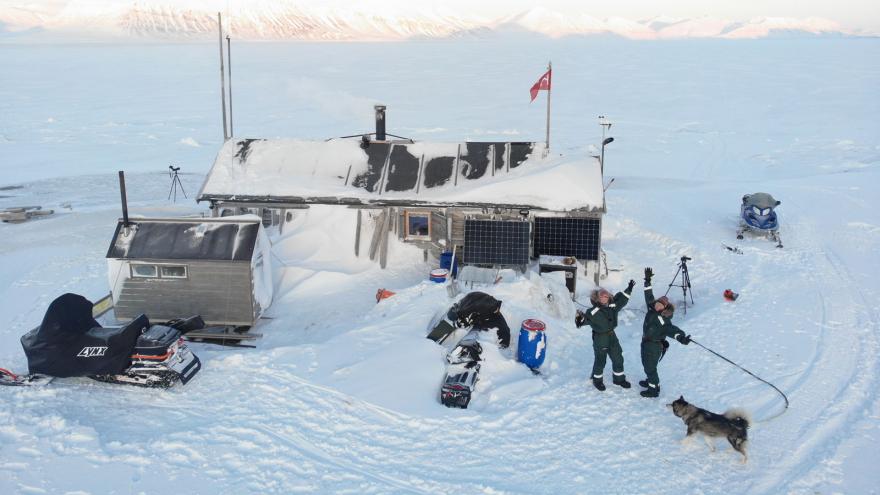 (CNN) -- When Hilde Falun Strom and Sunniva Sorby began a long-planned expedition in the Arctic archipelago of Svalbard last September, their main goal was to encourage conversation around climate change in the polar regions.

After spending close to nine months collecting data and samples for researchers in remote Basembu, situated 140 kilometers from the "nearest neighbor," the adventurers were all set to bid farewell to the tiny wooden hut they've been calling home since the beginning of their trip.

However, as was the case for many people across the world, their plans were abruptly put on ice due to the coronavirus pandemic.

Now the pair have little choice but to remain cut off from civilization with only each other for company, along with their dog Ettra and various polar bears, reindeer and geese, until a ship is able to make it across to take them home.

"We have been very cold," Strom tells CNN Travel via satellite phone. "There's no electricity. No running water. It's been challenging, but it's the most beautiful area you can picture."

Strom and Sorby spent two years planning the project known as Hearts in the ice, which saw them become the first women in history to overwinter in the Arctic without a male team member.

During their time in Basembu, the duo have been collecting weather and wildlife data, monitoring clouds, sea ice and organisms for international agencies such as the Norwegian Polar Institute and NASA.

The twosome, who have known each other for around six years, also lived in total darkness for three months, which they describe as an experience "not for the faintest heart."

"Neither one of us have lived so close, 24/7 in a small space [their cabin was built for whalers in the 1930s] with anybody," says Sorby.

"So that had its learning opportunities and challenges. But there isn't one thing that happened here that we haven't figured out together.

"Then in March, the earth started spinning off its axis, and everything began changing."

While they have little access to technology in Basembu, Strom and Sorby, who both work in polar tourism, were kept up to date on Covid-19 developments by their social media team.

But they had no idea how serious things were until it became clear their four-day "pick-up trip," in which family, friends, sponsors and science partners would arrive on a ship to collect them in early May, could not go ahead.

"There were a lot of tears," says Sorby, who lives in Canada. "It was really hard. The same ship that dropped us off in September would have come to pick us up.

"We have not moved from this location in close to nine months and some of the same people we stood and waved goodbye to would have been there.

"But the rest of the world has witnessed a lot of tragedies when it comes to health and so many other disappointments with everything that has been canceled. So we were all in the same boat so to speak."

Disappointment aside, the pair,who've written a book about their experiences, are determined to make the best of the situation they now find themselves in, and have opted to remain in Basembu until September in order to continue their work.

"We had a goal when we left and we're going to continue that," says Strom.

"We feel more useful here than back home. But it's hard, because we're not with our family and friends."

Sorby shares this sentiment, pointing out they're in a better position in some ways, as they haven't been "tainted" by the despair the coronavirus pandemic has heaped on the world over the past few months.

"We're going to stay in the good news department," she adds. "To abandon this project would be to sacrifice our purpose and what we value and stand for as women.

"So, it's never been an option for us to stop this. Irrespective of the cost to us emotionally, and financially.

"We've honestly done a lot of soul searching. We're both over 50. and we care deeply about our values and how we show up in the world." 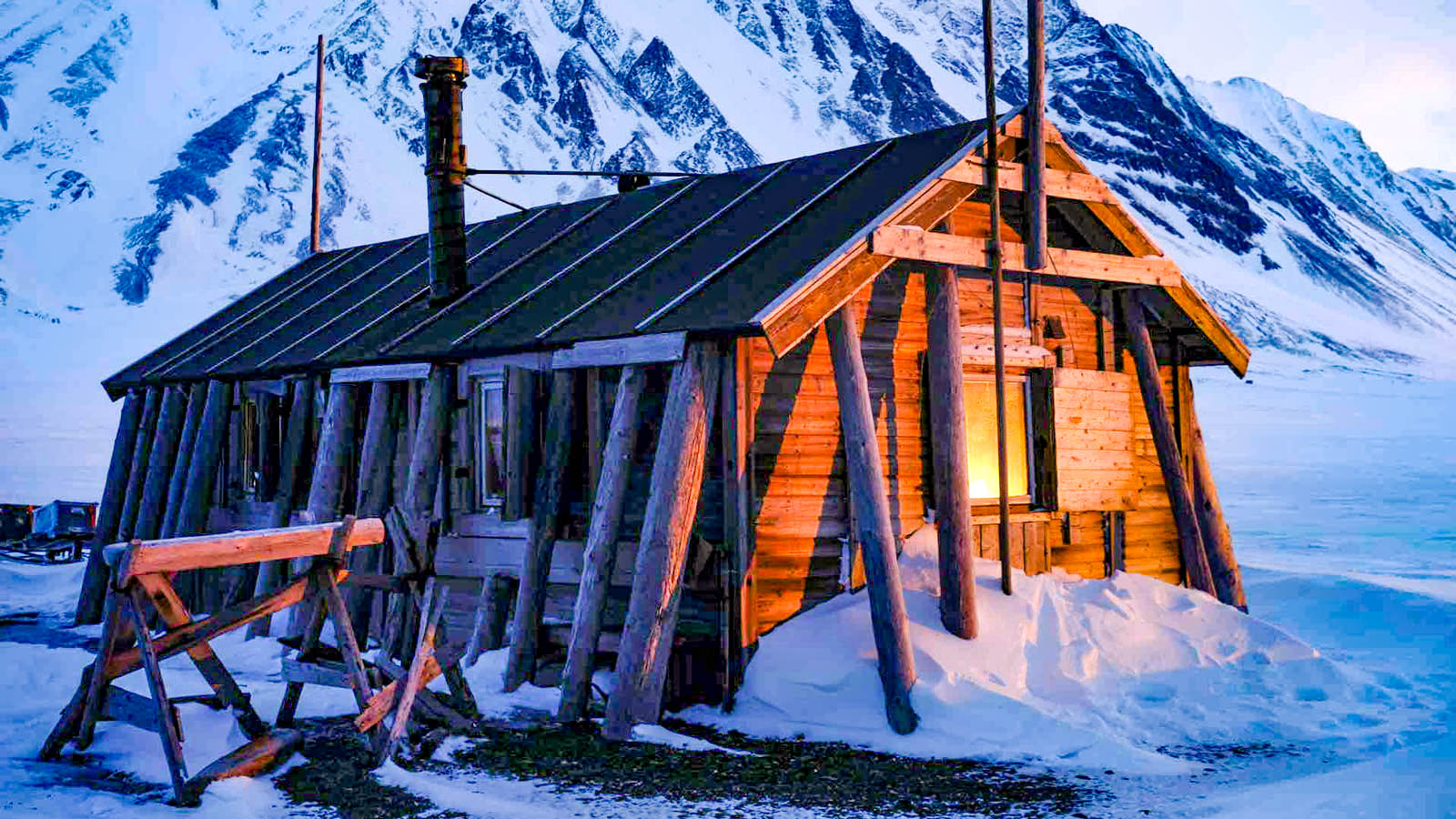 The fact that tourist ships are unable to travel to Svalbard, positioned halfway between Norway and the North Pole, due to global travel restrictions also means fewer data samples are being collected at present.

"The tourists get involved in citizen science programs onboard the ship. But there is none of that this year.

"Last August we had a ship in here every day with between 60 to 80 guests. The small ships start to come in May and the larger ships ones in June."

As a result, the duo have discovered they're the only people in their field actively collecting sea ice or phytoplankton at this time.

"It makes sense to us to continue so they're not missing data sets," adds Sorby. "We feel there's big value in that."

The Arctic tourist season runs from May through to September, which means if restrictions remain, there will be little or no tourism at all in the region this year.

"The whole Svalbard community has been really badly hit by Covid-19 and all the travel restrictions," says Strom, who has lived in Longyearbyen, the main settlement here, for several years. "It's really noticeable and a big thing for the tourist industry.

"But they've started to open up for guests coming from Norway from June, so we'll just have to see how things develop."

There's been much debate around the environmental risks around Arctic tourism in recent years, largely due to the increase in the number of expedition ships built for sailing Arctic waters and the dangers the emissions from the vessels may pose.

Last year, the Norwegian government issued a press release indicating it's considering a ban on heavy fuel oil (HFO) as well as a size limitation on passengers ships in Svalbard in a bid to manage growing tourism and protect the local wildlife.

However, as Strom and Sorby have indicated, the area also benefits from tourism a great deal.

Hilde Kristin Rosvik, editor of local newspaper Svalbardposten recently spoke of this conflict, explaining that while locals appreciate the money and awareness such tourism generates, the number of people coming in can be overwhelming.

"Now that coal mining is much less than it used to be, education, research and tourism are important elements of the economy," Rosvik told Forbes last year.

"The problem is too many tourists arriving all at once from a ship. It creates friction in such a small community."

Svalbard also happens to be among the regions on Earth worst hit by climate change.

The average annual temperatures here have risen by four degrees Celsius since 1970, while winter temperatures have jumped up more than seven degrees, according to a report released by the Norwegian Center for Climate Services in 2019.

This has led to regular avalanches, one of which left 10 houses buried in the town of Longyearbyen.

Strom and Sorby were compelled to launch Hearts in the Ice as a result of such events, with the aim "to engage a global community in the dialogue around climate change and what we can all do."

In between collecting data, they host live video "hang outs" with students and teachers around the world in order to spread the word. They also have a blog providing updates on their progress.

Both women say they're finding it difficult to take in the enormity of what's happening beyond their very remote location.

"It's an odd turn of events," adds Sorby. "We could never have imagined when we started this voluntary self-isolation, that the whole world would be in an involuntary isolation.

"It's still really hard to wrap your head around."

The pair, who've been using solar power and windmills for electricity, are very aware they'll be returning to a new world once that ship finally comes in, and many of the things they've taken for granted in the past will have totally altered.

For instance, their jobs -- Strom as product manager for tour operator Hurtigruten, and Sorby as director of global sales for Polar Latitudes -- no longer exist.

"The way we've cultivated meaning in our world is through travel and connecting people across countries and cultures and making ambassadors for the environment," says Sorby.

"It's very strange that that's come to a halt and we find ourselves without jobs, like a lot of people out there.

"So, we're continuing to stay here to be relevant in the other crisis that our world is facing, which is the climate crisis."

However, they're hopeful some good can come out of this situation, relating it to the 1962 book "Silent Spring" by Rachel Carson, which told how bird populations across the US were being affected by the widespread use of pesticides.

"The world is in a very different 'silent spring,' where it's taking a very big deep breath, and we're having to watch and observe," says Sorby.

"And I think a lot of people are re-evaluating how they work, how they live and how they travel.

"That's very interesting for those of us in the polar tourism industry.

"How do we introduce people to different landscapes, different cultures and different specially protected areas?

"How we do that matters. We get to try to understand how to redefine that. So, it's an interesting time."

Strom is hopeful that sustainable travel, already a hot topic before the pandemic, will become a way of life rather than just a movement.

"We as travelers will have a different view of how we travel [in the future]," she says.

"We'll find sustainable operators and other ways to travel in order to avoid impacting environments as much as we did before.

"I think it's going to be a new direction for all of us."

While both women are looking forward to eventually seeing their family and friends, as well as having a hot shower and a cappuccino, they're currently at peace with the isolation and looking forward to a very quiet (although not quite silent,) spring.

"There's no traffic," says Sorby. "No static in the air. No airplanes. No ship traffic. When we go outside, we only hear the sounds of the ice moving and the wind.

"We find a lot of strength in our goal and our vision, but also the nature around us.

"That's something everyone can relate to. [We can all] go outside and feel the power of nature. Go for a walk, or a run, or a bike ride. Mother Nature has a lot to offer."

Strom and Sorby are currently raising money via a GoFundMe page to help "expand the technology, citizen science collection and educational outreach" to schools across the globe.

Visit the Hearts in the Ice website for more information on their expedition.