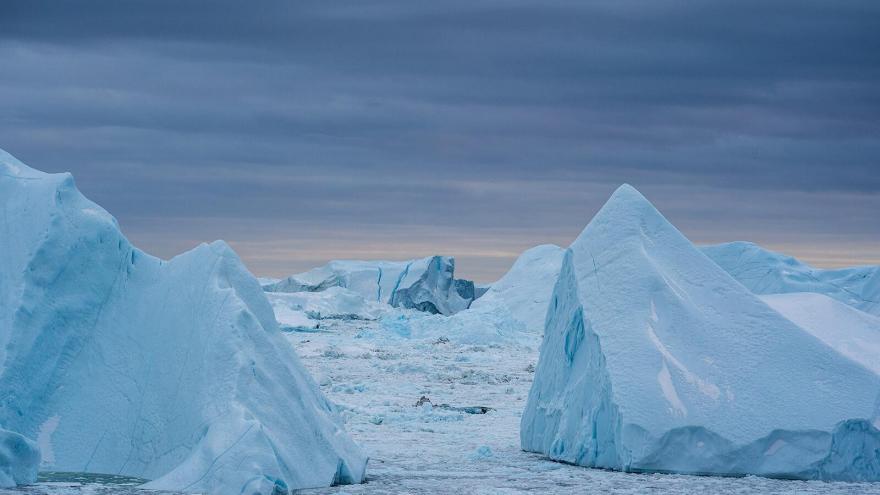 (CNN) -- Greenland is experiencing its most significant melting event of the year as temperatures in the Arctic surge. The amount of ice that melted on Tuesday alone would be enough to cover the entire state of Florida in two inches of water.

It's the third instance of extreme melting in the past decade, during which time the melting has stretched farther inland than the entire satellite era, which began in the 1970s.

Greenland lost more than 8.5 billion tons of surface mass on Tuesday, and 18.4 billion tons since Sunday, according to the Denmark Meteorological Institute. While this week's total ice loss is not as extreme as a similar event in 2019 — a record melt year — the area of the ice sheet that's melting is larger.

"It's a significant melt," Ted Scambos, a senior research scientist at the National Snow and Ice Data Center at the University of Colorado, told CNN. "July 27th saw most of the eastern half of Greenland from the northern tip all the way to the southern tip mostly melted, which is unusual."

As human-caused climate change warms the planet, ice loss has increased rapidly. According to a recent study published in the journal Cryosphere, Earth has lost a staggering 28 trillion tonnes of ice since the mid-1990s, a large portion of which was from the Arctic, including the Greenland ice sheet.

"In the past decade, we've already seen that surface melting in Greenland has become both more severe and more erratic," said Thomas Slater, a glaciologist at the University of Leeds and a co-author on that report. "As the atmosphere continues to warm over Greenland, events such as yesterday's extreme melting will become more frequent."

Although the current ice meltdown in Greenland isn't record-setting, the magnitude at which these events occur is a clear signal of how climate change is creating more melt periods.

"Overall, we're seeing that Greenland melts more often," said Scambos, who also authors the National Snow and Ice Data Center's Greenland updates. "In previous decades or centuries, it's extremely rare to get above freezing temperatures at the summit of Greenland."

In 2019, Greenland shed roughly 532 billion tons of ice into the sea. During that year, an unexpectedly hot spring and a July heat wave caused almost the entire ice sheet's surface to begin melting. Global sea level rose permanently by 1.5 millimeters as a result.

As Greenland's surface continues to thaw, Slater said coastal cities around the world are vulnerable to storm-surge flooding, especially when extreme weather coincides with high tides. Melting from Greenland is expected to raise global sea level between 2 and 10 centimeters by the end of the century, he added.

Massive ice sheets can melt rapidly when the air temperature is warm. But warmer ocean water is also eroding the ice sheet around the edges.

As humans release heat-trapping greenhouse gas, the warming atmosphere thaws the fresh white ice — which reflects the sun's energy back into space — on the surface. That exposes the darker ice below which absorbs solar energy and causes more melting.

Scientists say the trends at which climate change is accelerating are quite clear, and that unless emissions are curbed, such extreme events will continue to occur more frequently.

"While such events are concerning, the science is clear," Slater said. "Meaningful climate targets and action can still limit how much the global sea level will rise this century, reducing the damage done by severe flooding to people and infrastructure around the world."

Correction: An earlier version of this story included an incorrect description of Greenland. Greenland is part of North America. This story has been updated.