'The America I dreamed of does not build over dead people or mass graves': Families of Surfside victims speak out 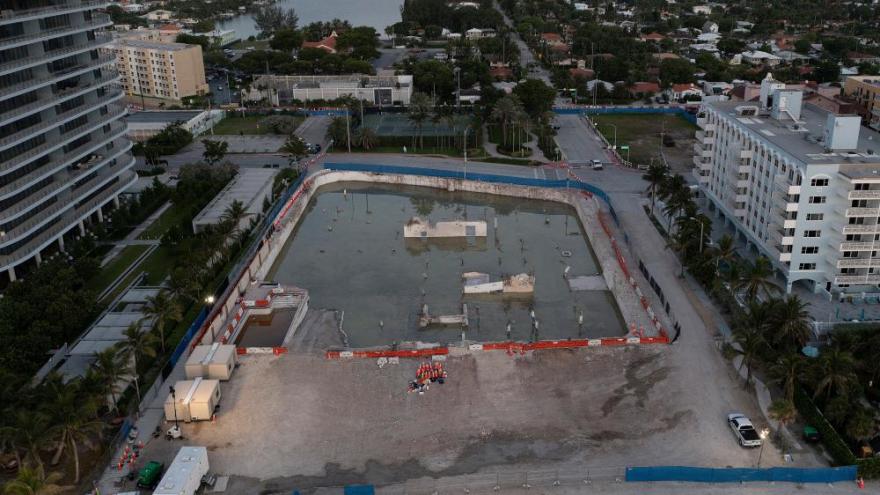 In this aerial view on July 3,1 the cleared lot where the collapsed 12-story Champlain Towers South condo building once stood in Surfside, Florida.

(CNN) -- The loved ones of people who died when a Surfside, Florida, condo building partially collapsed called on officials to make the site a memorial to victims.

Ronit Felszer, who lost her son, Ilan Naibryf, 21, in the June disaster, moved her family of five to America in 2002 "because I believed in what American stood for," she said at a news conference Thursday.

"The America I dreamed of does not build over dead people or mass graves," Felszer said.

The collapse of Champlain Towers South on June 24 just before 1:30 a.m. killed 98 people.

Surfside -- a town of about 6,000 people just north of Miami Beach -- is home to a large population of Orthodox Jews. Following the collapse, when families were reuniting, it was common to hear Hebrew, Spanish, English and Portuguese.

The diverse community came together, attempting to grasp strength in faith. Synagogues and churches opened for emergency prayer services. Vigils were held for the missing, and many prayed, sobbed and hugged with the tower's ruins visible in the background.

"It is obvious that this has become more than a collapsed building site. It's a holy site," Surfside Mayor Charles Burkett said in the weeks following the collapse.

But in a court hearing on Thursday, a court-appointed receiver, attorney Michael Goldberg, stated that the sale of the Champlain Towers South site for $120 million to an unnamed buyer will be formalized in a contract next week, according to the office of Governor Ron DeSantis.

DeSantis' press secretary, Christina Pushaw, said the sale is not yet final, because it could take several months to complete due diligence on zoning and environmental issues. And until the sale is finalized, she said, other potential buyers can submit bids.

Additionally, DeSantis' office on Friday said that "any decision about the land where Champlain Towers South once stood must be made by the owners."

"This is understandably a sensitive topic, and the Governor hasn't taken a position on what should be done with the land. It's not public land, so the state does not get to make the final decision," Pushaw said.

Monica Iken, who lost her husband, Michael, when the Twin Towers came down on 9/11, advocated for the site to be a memorial.

"Unfortunately, I'm having déjà vu. This really brought back all the nightmares of 9/11 for me when I lost my beloved Michael Patrick Iken," she said. She added that she "worked hard to make sure that we have the world class [9/11] memorial and museum that we have today."

Iken, who founded the non-profit September's Mission to advocate for those affected by natural and civil disasters, vowed to continue helping the friends and family of the victims navigate the process. She vowed to find out who "the stakeholders are" and reach out to Gov. DeSantis.

Iken emphasized that it's important for people to understand that the victims of the Surfside collapse "suffered."

"They were awake, some of them. We don't have remains of whole bodies. That people thought there were whole bodies there -- there weren't. Some people just have pieces of their loved ones," she said. "This is sacred an hallowed space just like the [9/11] memorial."

Vicky Btesh, who lost her husband, Andres Levine, and three cousins, said, "Nobody deserves to go to sleep and never wake up, crushed by their own home."

"And nobody deserves to have their final resting place be disrespected. Nobody. We do not build over dead people, as you've heard over and over again," she said. "This memorial should be a permanent reminder of what happened here."