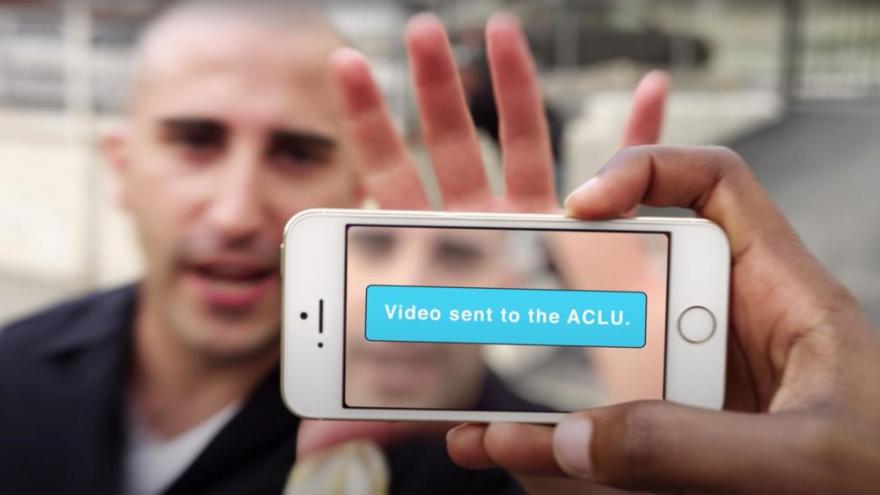 (CNN) -- The American Civil Liberties Union has an app that allows people to record their interactions with law enforcement. It could come in handy during ongoing protests over police misconduct, says a spokesperson for the organization.

The ACLU first released the "Mobile Justice" app in 2015 for users to record possible police misconduct. Videos are automatically uploaded to the organization's server to ensure they are saved even if a phone is seized or destroyed.

With protests erupting in at least 30 US cities over the death of unarmed black man George Floyd at the hands of a police officer in Minneapolis, Minnesota, the ACLU is encouraging people to document their interactions with police in case the situation escalates.

"There is no doubt that moments like these highlight the importance of the app," Marcus Benigno, a spokesperson for the ACLU of Southern California, told CNN. "Without a video of the unfortunate and tragic incident, we probably wouldn't even know George Floyd's name."

Video captured Floyd pleading that he couldn't breathe while being held down with a knee on his neck by a Minneapolis police officer.

The ACLU first launched the app following the deaths of unarmed black teenagers Trayvon Martin and Michael Brown, which ignited the Black Lives Matter movement in 2014.

While thousands take to the streets to protest police brutality as unarmed black men continue to die in the hands of law enforcement, Benigno said citizens are encouraged now more than ever to assert their First Amendment right to film law enforcement while they are on active duty in case the situation escalates.

How to use the app

When a user goes to their state's Mobile Justice app, they are given an option to record a video which is downloaded to their phone and directly sent to that ACLU chapter for staff to review. Before submitting, users must add a report describing the location of the incident, who was involved, names of the officers in the video if known, and any additional details.

Users can also report an incident they witnessed and learn more about their rights to take photos and videos with audio recordings, which differ from state to state.

In the upcoming months, the app -- which is currently available in 17 states and the District of Columbia -- will be accessible to everyone in all 50 states while respecting each state's laws, Benigno said.

"The initial goal was to make sure abuses from law enforcement were caught on camera, so we can ultimately reform the system, but what we're seeing is it's not just about capturing abuse," Benigno said.

"It's become a deescalation tool. It can help people feel empowered while forcing officers to take a second to reevaluate the situation. There are countless videos showing people asserting their right to film with a sense of security and safety."