The '90s era Tamagotchi is back -- this time with a camera 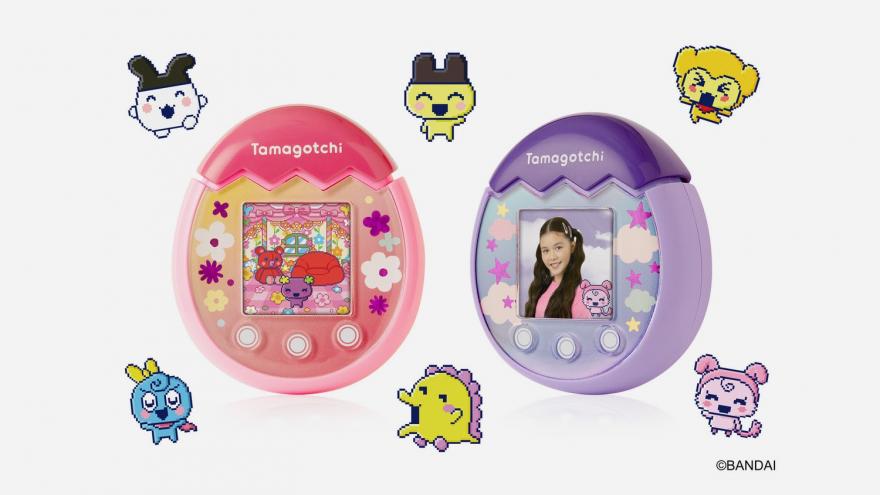 (CNN) -- The Tamagotchi is back, but this time the '90s icon comes with a camera.

Bandai America, its parent company, is launching the new Tamagotchi Pix. The core remains the same: an egg shape, three buttons, with the goal of raising a virtual pet. It goes through different life stages, such as hatching from an egg, and demands attention, like asking to be fed or played with. It dies a few days later.

But those familiar with the original toy will see it has been updated for2021. Instead of a pixelated black and white screen, the Pix screen is in full color. And there's a built-in camera that lets you take pictures with your virtual pet. To feed your Tamagotchi, you can cook for it or have food delivered. You can alsonurture the pet by painting or cooking with it using the camera to snap pictures for your pet.

There's also an explore mode, where other Tamagotchi friends will pop up to do activities with your virtual pet. You can schedule "playdates," and connect with a friend's device through a Tama Code. But, like the original version, there's no WiFi connection required to connect to your Tamagotchi.

This isn't the first time Bandai has revived the toy. To celebrate its 20th anniversary in North America, Bandai launched a mini version of iconic digital pocket pet in 2017.

"We do have plans for the next couple of years to continuously bring new items into North America," Badie said.

In its almost 25 years in the market, the company said it's sold over 82 million Tamagotchis globally. The brand first launched in 1996 in Japan, and came to America the following year.

Unlike the United States, Tamagotchis never needed to make a comeback in Japan. The Tamagotchi brand has had regular launches in Japan,becoming a staple children's toy in the country.

"Just like here in America, there's certain products that all kids play with. This is that product ... for them in Japan," Badie told CNN Business in 2019.