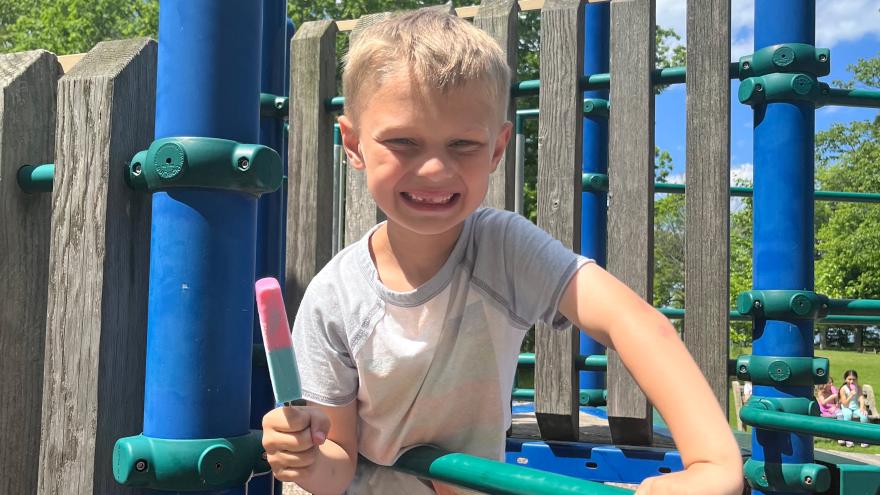 (CNN) -- An 8-year-old boy who was attending the Highland Park Fourth of July parade with his parents and twin brother was shot and is now paralyzed from the waist down, family spokesperson Anthony Loizzi told CNN on Thursday.

Cooper Roberts was shot in the chest and suffered several significant injuries, including a severed spinal cord, Loizzi said in a virtual news conference earlier Thursday.

The child was conscious for the first time since the shooting and was removed from a ventilator, but remained in a great deal of pain, Loizzi said in an update on Friday. Cooper asked to see his twin brother, Luke, and his dog.

Cooper's condition was also upgraded from critical to serious, which was a positive development, Loizzi said Friday.

"It's going to be a new normal for him moving forward," Loizzi said in Thursday's news conference. "It sounds (like) he'll have significant issues moving forward, especially with walking."

Cooper and his twin loved the parade,Loizzi said. The beloved event ended in tragedy when a gunman started firing a semi-automatic rifle into the crowd from a rooftop. Seven people were killed, and dozens of others -- including the Roberts -- were wounded.

Luke suffered injuries from shrapnel, was treated and released and wasrecovering at home, Loizzi said. Their mother, Keely Roberts, "was shot in the leg and foot area" and underwent several surgeries, the spokesperson added.

She has since been discharged because she insisted she wanted to be by Cooper's side at the hospital, Loizzi said.

Cooper and Luke also have four older sisters, according to the spokesperson. A verified GoFundMe campaign has been created in support of the family.

A baseball fan and a fighter

Cooper was always very active, loves baseball -- and sports in general -- and is a Milwaukee Brewers fan, Loizzi said.

The twin brothers are "best friends, partners in crime," Cooper's oldest sister said in a statement.

"Cooper has never met a stranger a day in his life - everyone he meets is his instant best friend (second only to Luke)," her statement said. "He is also unbelievably athletic - he loves soccer, riding his bike, baseball (Go Brew Crew - about a week or so ago he went to his first Brewers game and couldn't have loved it more) and football (Go Pack Go). He is so studious and loves to read - a literal bookworm. Maybe that's why he is the funniest, most engaging story teller you'll ever meet."

"There's nothing this kid can't do and no words for the amount of goodness within him," it added.

Cooper has undergone several surgeries since the shooting. But, much like his mother, Cooper is a fighter, Loizzi said.

"If you know Keely, she's just a fighter, and it sounds like Cooper got that part of her in him because he's fighting as hard as he can," Loizzi said.

Keely Roberts is the superintendent of Zion Elementary School District 6, a school district in northeastern Illinois. In a statement, district officials said they were hopeful Cooper would "be ok, but we know his medical bills will be significant as will the therapy that will follow."

"Please pray that Cooper will recover as best as possible. Any help you can provide -- thoughts, prayers, or donations, is greatly appreciated," the district statement said.

Loizzi, who said he knows Roberts through work, described her asalways committed to her students, working "around the clock," and emailing him even in the early morning hours, "worrying about students in her schools and how she can support them and serve them."

"She's been a school administrator for many, many years serving many districts, and I've just been continuously amazed ... (at) how she gives all of herself, works hard day and night to serve students and families in public schools," Loizzi said. "And now she, and her family, need our support."