The 4 remaining Supreme Court cases of this blockbuster term 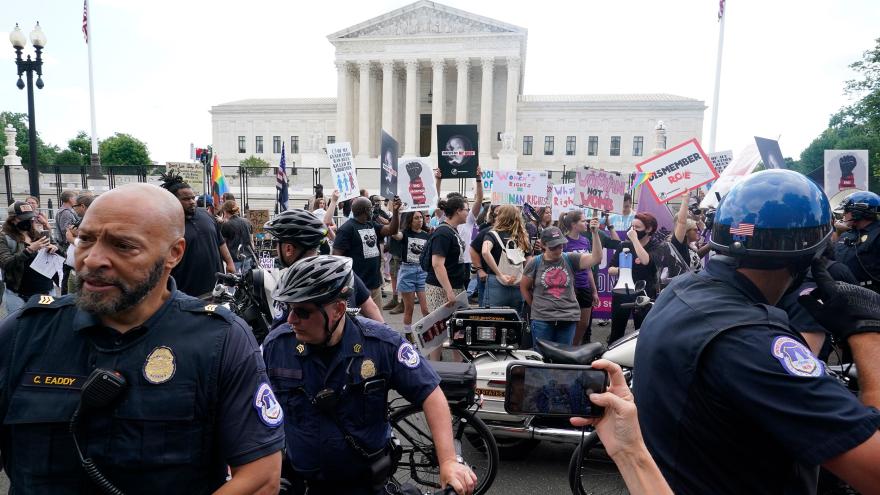 (CNN) -- Although the Supreme Court issued the two most important opinions of the term last week, upending near 50-year-old precedent on abortion and expanding gun rights for the first time in a decade, this blockbuster term is not over.

Still to be decided are four disputes, and new opinions will be announced Wednesday morning.

A look at what remains:

The justices are considering whether the Biden administration can terminate a Trump-era border policy known as "Remain in Mexico." Lower courts have so far blocked Biden from ending the policy.

Under the unprecedented program launched in 2019, the Department of Homeland Security can send certain-non Mexican citizens who entered the United States back to Mexico -- instead of detaining them or releasing them into the United States -- while their immigration proceedings played out.

Critics call the policy inhumane and say it exposes asylum seekers with credible claims to dangerous and squalid conditions. The case raises questions not only regarding immigration law, but also a president's control over policy and his diplomatic relationships with neighboring countries.

The justices will decide a case concerning the EPA's authority to regulate carbon emissions from existing power plants, in a dispute that could harm the Biden administration's attempts to slash emissions. It comes at a moment when scientists are sounding alarms about the accelerating pace of global warming.

The court's decision to step in and hear the case concerned environmentalists because there is no rule currently in place. A lower court wiped away a Trump-era rule in 2021 and the Biden administration's EPA is currently working on a new rule.

But the fact that there were enough votes to take up the issue now, struck some as an aggressive grant, signaling the court wants to limit the scope of the EPA's authority even before a new rule is on the books.

In another dispute, the court could weaken work protections for veterans. Le Roy Torres, a veteran and former employee of the Texas Department of Public Safety, told the state agency that he could no longer serve as a state trooper and sought a comparable job to accommodate his service-related disability. When he was denied the job, he filed suit under a federal law meant to protect reemployment rights of returning veterans.

But Texas responded that states are immune from such lawsuits brought under the federal Uniformed Services Employment and Reemployment Rights Act, passed under Congress' war powers authority. Now, the court will decide a clash that pits Congress' authority to provide for the national defense against a state's ability to decide when it gets sued. The ruling could impact thousands of active and reserve service members nationally who work for state agencies.

Victor Manuel Castro-Huerta, a non-Indian, was convicted of child neglect in a case concerning his step daughter, who is a member of the Eastern Band of Cherokee Indians.

His conviction was wiped away after a state appeals court held that because the crime occurred in Indian country, the state lacked jurisdiction. Now the court will decide whether a state has the authority to prosecute non-indians who commit crimes against Indians in Indian country.

In 2020, in an opinion penned by Justice Neil Gorsuch and joined by the court's liberals, the majority held that Oklahoma had no jurisdiction to prosecute an Indian who had committed a crime in Indian country.

This story has been updated to reflect recent developments.