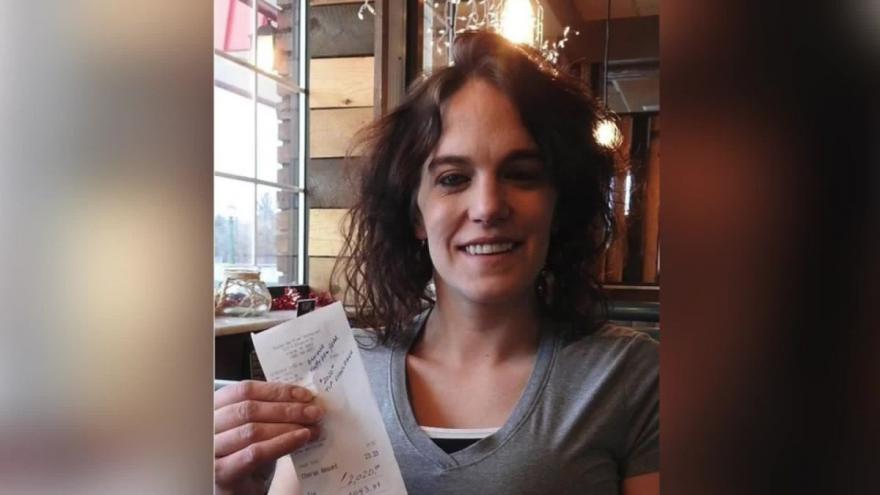 (CNN) -- It all started with a server in small-town Michigan. Then a New Kid on the Block took the challenge national.

Now, people across the country are tipping their servers a little bit extra in honor of the New Year. It's all part of the 2020 tipping challenge.

The trend began last week, when Danielle Franzoni, a server at a restaurant in Alpena, Michigan, received a $2,020 tip on a $23 bill. The formerly homeless single mom spoke out, saying the money would help her "build a future."

She then paid it forward, tipping $20.20 on her dinner bill that same week.

Then on New Year's Day, restauranteur and former "New Kids on the Block" crooner Donnie Wahlberg surprised Bethany Provencher, his server at IHOP, with a $2,020 tip on his $78 check.

Provencer, an admitted boy band fan who had recently moved to St. Charles, Illinois, said the whole restaurant caught an earful of her excitement when she opened the bill.

"It was the greatest blessing I could've received from anyone," she told the Daily Herald in St. Charles.

Wahlberg's wife, Jenny McCarthy, tweeted a photo of the bill -- and that's when the challenge began to pick up steam.

Steve Garfield, a writer who lives in Boston, read about Wahlberg's generous tip. He usually walks to his local Dunkin' in the morning and leaves his wallet at home -- he pays for his coffee through an app -- but on Friday, he made sure to bring a crisp $20 for the tip jar.

He tweeted a photo of his tip to promote the challenge, he said.

"The people at my Dunkin' are really good, and I'm glad that this gave me an opportunity to help them," he told CNN.

Ed Norwood, a motivational speaker in Cypress, California, read Franzoni's story and got inspired too. He shared a snap of one of his bills, complete with a $20.20 tip and a motivational message for his server.

"I wanted to find little ways in the New Year to encourage people" with the tip, he told CNN. "You never know whose New year you can inspire by framing it in words and a tip of the year they made it to."

It's not all about money

Lisa Foxx, a radio host in Los Angeles, encouraged bargoers at Morton's steakhouse to tip $20.20 for the New Year and to spread the word. She saw McCarthy's tweet and wanted to perform a random act of kindness of her own.

"I think it's definitely something people can spread at the bar, too -- spread the word, if they're able to, kind of get people fired up about it," she told CNN. "It makes you feel like you're part of something special."

The 2020 tip challenge is up to interpretation -- tipping $2,020 or $20.20 is steep for some. Foxx suggested that people eager to participate instead volunteer for 20 hours or commit to doing something kind for 20 days.

"It shouldn't cost anything to have a positive impact on someone's life," she said.