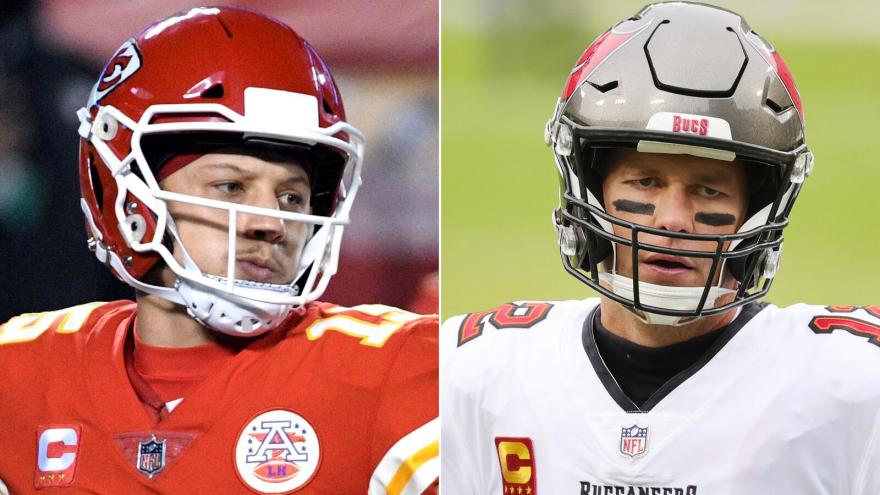 (CNN) -- The NFL made it through the regular season and the playoffs without a single canceled game despite the coronavirus pandemic. Now, there's just one game left, and it pits an all-time great against a young superstar who's on the path to becoming one himself.

Brady has played in and won more Super Bowls than any player in NFL history. This will be his 10th Super Bowl appearance, and he's won six. Should the Chiefs win Sunday, Mahomes would be the youngest starting quarterback to win multiple Super Bowls. That current record is held by Brady, who was 26 at the time.

The last time an NFL team won two consecutive Super Bowls? Of course it involves Brady, as he and the New England Patriots won Super Bowls XXXVIII and XXXIX in the 2003 and 2004 seasons, respectively.

With an age gap of 18 years and 45 days between Brady and Mahomes, it will be the largest age differential between the two starting quarterbacks in Super Bowl history.

But while those names may be familiar, the vibe likely will feel quite different. Because of the pandemic, Raymond James Stadium won't be full. Instead, there will be around 25,000 fans allowed to attend the game -- including 7,500 vaccinated health care workers who were given free tickets by the NFL.

Aside from the pandemic, a big question heading into the 2020 NFL season was how Brady -- who in March signed with Tampa Bay after 20 seasons with the Patriots -- would fare without head coach Bill Belichick.

Initially, results were mixed, as Tampa Bay began the season 7-5 while Brady learned a new offense. Since losing to the Chiefs 27-24 in Week 12, however, the Buccaneers have won seven consecutive games. That includes three wins on the road -- and scoring at least 30 points each time -- during the NFC playoffs.

After the loss to the Chiefs, CBS analyst Tony Romo predicted the two teams would meet again.

Now they will. And not only did Brady reach the Super Bowl in his first season with Tampa Bay, he's also part of more history: The Buccaneers are the first team that will play in the Super Bowl in its home stadium.

"A home Super Bowl for the first time in NFL history, I think, puts a lot of cool things in perspective," Brady said. "Any time you're the first time doing something, it's usually a pretty good thing."

Brady already has the distinction of being the oldest starting quarterback to win a Super Bowl, when at age 41 he won Super Bowl LIII in Atlanta against the Los Angeles Rams. If the Buccaneers win on Sunday, Brady would be the first player on an NFL, MLB, NBA or NHL team to win titles for two different teams after turning 40, according to the NFL Research Twitter account. Only Peyton Manning has won Super Bowls with two different franchises as the starting quarterback.

This is Tampa Bay's second appearance in the title game, winning Super Bowl XXXVII against the then-Oakland Raiders in San Diego, California, to end the 2002 season.

The Chiefs, meanwhile, seek their third Super Bowl title overall, having in addition to last year also won Super Bowl IV back in 1970.

The top team in the AFC, Kansas City had the best record in the NFL in the regular season, at 14-2, earning a first-round bye in the playoffs. The Chiefs went on to defeat the Cleveland Browns and Buffalo Bills at home to earn the trip to Tampa. Kansas City enters Super Bowl LV having won 12 straight games started by Mahomes, including the postseason.

"Instead of just soaking in all the glory and winning the Super Bowl last year, we went back to work, and we went to work every single day to make ourselves better, to prepare ourselves for every single situation that could arise, and it's put us in this game," Mahomes said. "But we have to keep going because we're playing a great football team and we want to try to find a way to complete that run-it-back tour."