The 1st all-female spacewalk is scheduled for this week 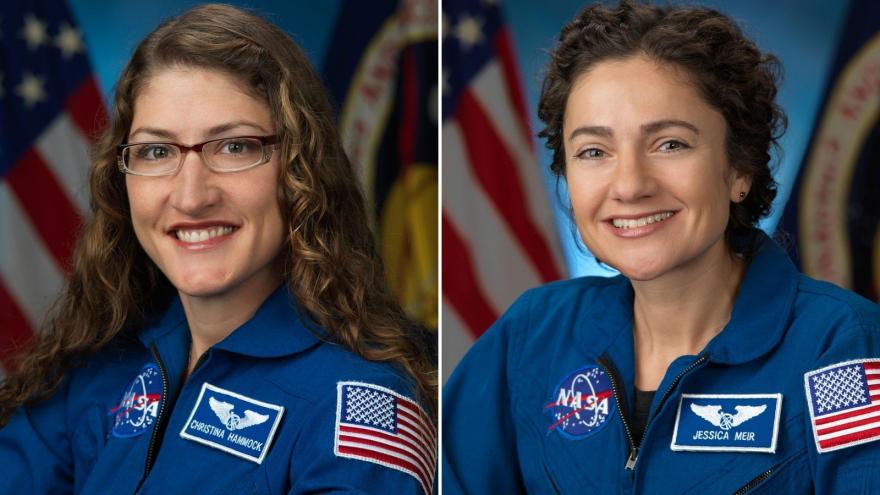 (CNN) -- After the first all-female spacewalk was scrapped in March, NASA has now scheduled another attempt with astronauts Christina Koch and Jessica Meir for October 18 at 6:30 a.m. ET.

The announcement was made Friday during a briefing by the agency previewing 10 upcoming spacewalks by astronauts on the International Space Station.

For the intended spacewalk in March, Koch was going to be paired with astronaut Anne McClain, who has since returned to Earth. In March, NASA cited spacesuit availability as the reason for scrapping the walk. McClain herself made the decision and the teams supported her, Koch said.

"We do our best to anticipate the spacesuit sizes that each astronaut will need, based on the spacesuit size they wore in training on the ground, and in some cases (including Anne McClain's) astronauts train in multiple sizes," Brandi Dean with NASA's public affairs office told CNN in March. "However, individuals' sizing needs may change when they are on orbit, in response to the changes living in microgravity can bring about in a body. In addition, no one training environment can fully simulate performing a spacewalk in microgravity, and an individual may find that their sizing preferences change in space."

Koch conducted a spacewalk along with fellow astronaut Nick Hague instead of McClain at the time.

When asked about spacesuit availability this time around, Koch said there are currently two medium spacesuits on board. After the first all-female plan was shifted, Koch configured the second spacesuit herself using what was available on board.

She and Meir have both trained in medium-sized suits for the last six years.

Koch's mission will surpass that of Peggy Whitson, who spent 288 consecutive days in space, and end up just shy of the longest single spaceflight by a NASA astronaut: 340 days, set by Scott Kelly.

Overall, there will be 10 spacewalks over the next three months, "a cadence that has not been experienced since assembly of the space station was completed in 2011," according to a tweet by NASA. The tweet also showed an image of pairings for the upcoming spacewalks.

Meir arrived on the space station for her first mission this week. In addition to her first spacewalk with Koch, she will also conduct a spacewalk with European Space Agency astronaut Luca Parmitano.

Meir shared an image of her hugging Koch after arriving on the station.

"This is how it feels when in addition to your childhood dream being fulfilled by arriving to @Space_Station, you're greeted by your Astro-brothers and sisters on the other side of the hatch," Meir said in her tweet.

She and Koch have trained together for the last six years because they're members of the same astronaut class. Meir will spend more than six months on board the station.

The upcoming spacewalks will help replace solar array batteries and upgrade them to lithium-ion batteries, as well as refurbish the Alpha Magnetic Spectrometer, a scientific instrument "that explores the fundamental nature of the universe," according to NASA.