The 1970s moon buggies are still up there. GM and Lockheed Martin want to make new ones 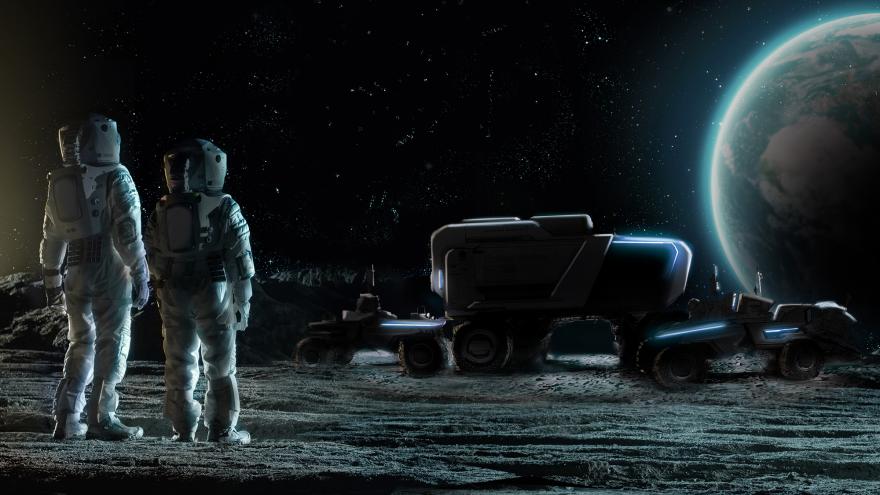 (CNN) -- There are three 50-year-old carsparked on the moon. Now, General Motors and Lockheed Martin wants to build some new ones and put them on the moon, too.

In the 1960s, GM worked with Boeing to create the Lunar Roving Vehicle. Three of them -- LRV-1, LRV-2 and LRV-3 -- were driven on the moon's surface in 1971 and 1972. Human beings haven't been to the moon sincethat timebut the Lunar Rovers, as they were better known, are still there.

Now, the National Aeronautics and Space Administration (NASA) wants to return to the moon, and astronauts will need some wheels when they get there. Technology has improved a lot since 1972, however, so astronauts won't be trying to fire up one of those old Moon Rovers like it's theirgranddad's Oldsmobile 442.

Instead, GM has teamed up with Lockheed Martin to design a new generation of Rovers. Thanks to more advanced battery technology the new Lunar Rovers will be able to drive farther than the old ones, which went less than five miles. No one at either company is saying, yet, how far the new ones will go.

The Rovers will be important because the places scientists will want to do research on the moon's surface will probably not be the places their spacecraft will land. Good landing spots will be big, flat and featureless. As on Earth, the most geologically interesting places on the moon will be jagged, rough and rocky, said Kirk Shireman, vice president for Lockheed Martin's Lunar Exploration Campaign. The astronauts will need to commute to their lunar workplaces with all their gear.

The new Rovers will still be powered by electricity just like the originals, engineers from GM and Lockheed said. Internal combustion engines aren't really an option on the moon, as they require plenty of oxygen-rich air, and the moon doesn't have that.

Beyond that, not a whole lot is known for sure about the new Lunar Rovers. The project is still in the planning stages. NASA hasn't even put an official request for proposals, yet, but GM and Lockheed want to be ready when it comes. The RFP will detail exactly what NASA needs from a modern moon vehicle.

Still, there is a lot that's already known about the challenge of getting a motor vehicle to the moon and having it drive around there.

The Lunar Rover will not go to the moon in pieces that need to be assembled, like a child's bike at Christmas time. NASA will be sending highly trained scientists to the moon, and they'll have better things to do thango looking for "Part A" that'slistedon the assembly diagram.

"You want them doing research, you don't want them building cars," said Shireman.

How, exactly, the Rover will be controlled by the astronauts still hasn't been decided, said Ryder. It could just be fully autonomous all the time with astronauts just entering a destination and the Rover taking them there, or there could be a steering wheel or a control toggle, like there was on the original Rovers.

The companies intend forthereto be multiple Rovers on the moon at a time. They could go different places or followone anotherlike Lunar Rover trolley cars.

Safety is, of course, very important, said Jeff Ryder, vice president for growth and strategy at GM Defense, the subsidiary that's working with Lockheed. Battery safety is important, as it is with Earth-going electric vehicles, but other things are different.

The temperatures on the moon willpresent a challenge for astronauts and the Rover. Temperature changes on the moon aren't just extreme. They're extremely extreme.

When the sun is out, temperatures rise to an insta-tanning 260º Fahrenheit. That's about double the highest surface temperature ever recorded on Earth. At night the temperature will be about --280º. Without an atmosphere to stabilize temperatures, the change is instant.

The electric Rovers will probably charge up using solar power, which will be just fine during the nearly two-week long moon day. Energy will need to be stored up to use during the two weeks of lunar night, though. The moon rotates onits axis once during each trip around the Earth. That's how the moon always keeps the same side facing towards Earth and it's why each day and night on the moon lasts about a month.

Crash safety is also important, said Ryder. The Rover will mostly drive very slowly and carefully. With only 1/6 the gravity of Earth, a Rover could go into a full "Dukes of Hazzard" jump over a relatively small bump if driven at normal car speeds. Also, there's even more incentive to avoid injury than on Earth.

"Waiting for an ambulance on the moon is going to be a really long wait," said Shireman.

Among the hazards are sand that not only tends to stick to stuff, but that's also sharp like flakes of glass, since there are no breezes to blow it around and smooth it down. And, although there's little risk of a high-speed collision with a truck, even a small, low-speed bump could risk tearing an astronaut's life-saving spacesuit. Care needs to be taken to avoid any exposed sharp areas.

Autonomous driving software developed for use on Earthwill have only limited utility on the moon. Autonomous driving researchers working on Earthbound cars spend a lot of time designing systems to avoid things like bicyclists, jaywalkers, construction barrels and other hazards that have, so far, not been found on the moon.

Driving on the barren surface of the moon would be most similar to autonomous off-road driving. It will be a matter of avoiding hazards like boulders, steep drop-offs and areas of deep, sticky sand. 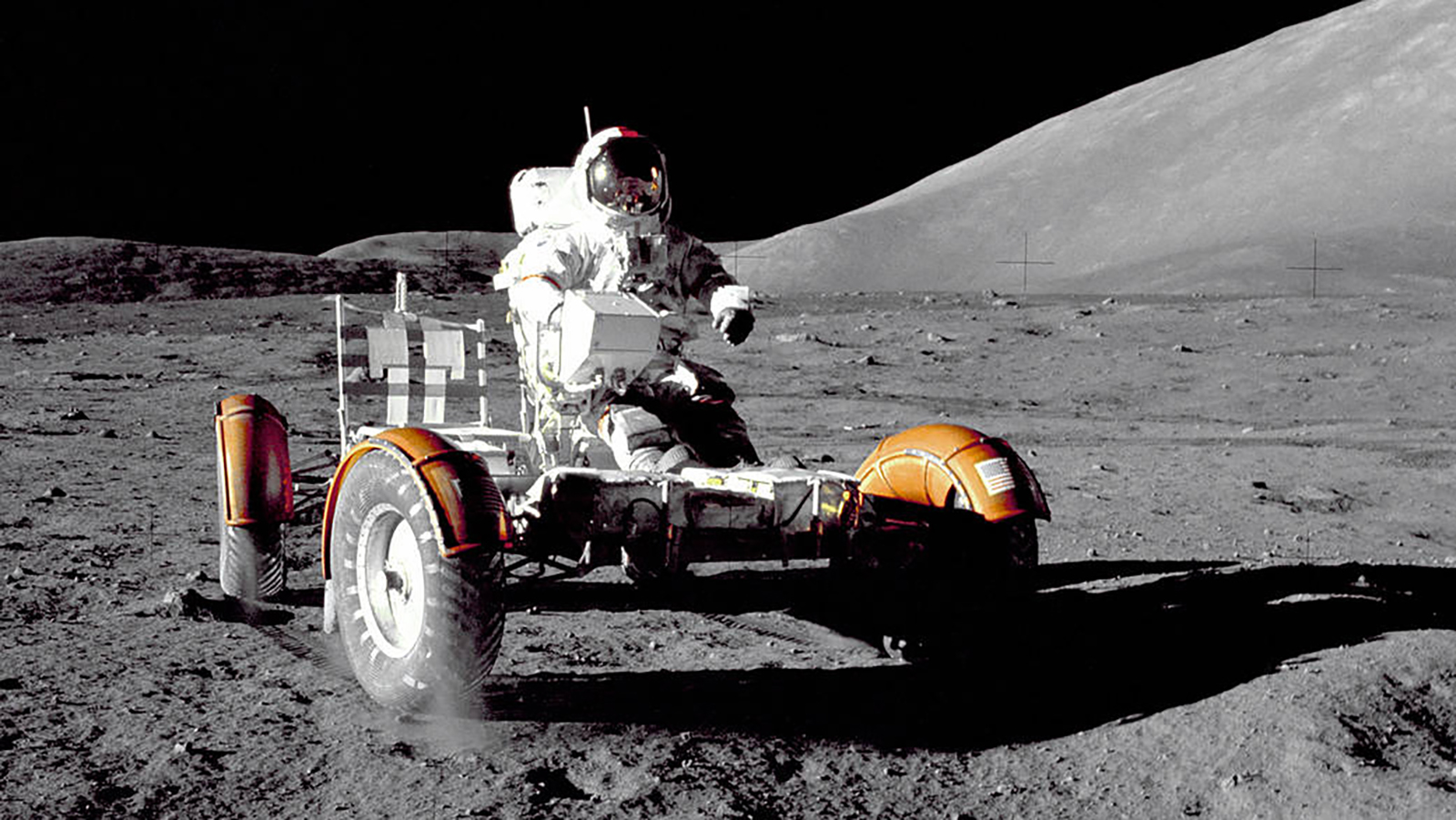 TheLunar Roverwill have to rely on old-fashioned methods, although with the benefits of modern computer power, to find its way around. The classic Roverfrom the early 1970s simply kept track of how far it moved in each direction -- information that was punched into a computer by the astronauts -- to figure out the way back to where it started. It also could use the sun to help calculate its position.

Today'sRover could also compare its surroundings to detailed three-dimensional map data to determine exactly where it is in relation to the hills, mountains and boulders around it. And it could use the stars overhead the way travelers here on Earth have done for thousands of years. Either way, navigating on the moon won't be a big challenge, said Shireman.

For now, the two companies are just working out the basics. NASA's request for proposalsis expected later this year and there could be competition for the job. But the race is already on.