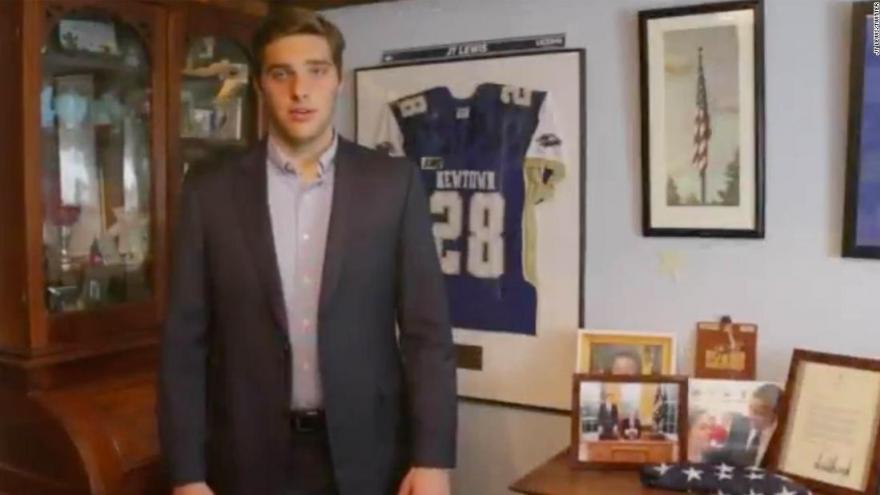 JT Lewis, the brother of 6-year-old Jesse Lewis who was killed in the Sandy Hook shooting, is running for Connecticut state senate.

(CNN) -- JT Lewis, the brother of 6-year-old Jesse Lewis who was killed in the Sandy Hook shooting, is running for Connecticut state senate.

He'll be challenging Republican state Sen. Tony Hwang, who is in his third term representing the state's 28th district -- which includes Newtown, where the massacre took place.

In his campaign video, which was released on Monday, Lewis said he and his mom reached out to Hwang to "help prevent future tragedies" but never heard back.

"On December 14, 2012, a shooter entered my brother's classroom, fired bullets until the gun jammed," Lewis says in the video. "Jesse yelled for his classmates to run, while he stood behind to defend his teacher. Nine of his friends ran, Jesse is credited with saving nine lives."

Lewis says in the video he's running for senate to honor his little brother who lost his life.

"I share his story because I believe that inside every single one of us is that same innate courage we never even knew we had, to do something extraordinary."

Lewis was a recipient of the 2016 MTV Music Awards Courage award, after spending his teenage years advocating for those who have experienced traumatic events, CNN affiliate WTNH reported. He raised money for college scholarships for Rwandan orphan genocide survivors and established self-sustaining fish and poultry farms in the country, the affiliate said.

After the Parkland high school shooting, he turned his attention back to school safety, the affiliate said.

"That's armed guards, securing the schools, anything we can do to make the teachers feel prepared for a circumstance like this," he told the station.

In his video, Lewis says that he's met with numerous state and country leaders including former President Barack Obama, "the whole time hoping someone would stop the violence we so personally experienced."

Last year, the teen said he met President Donald Trump during the release of his Federal School Safety Commission's report.

"As the meeting concluded, President Trump stood up from the table and invited one person back to the Oval office for a private moment, ME! I followed him into the historic room, my jaw nearly at the ground," Lewis said.

"Both President Trump and President Obama treated me with the utmost respect and class," Lewis said on Twitter. "More importantly, they honored my brother's memory. A lesson: Politics only divides us if we allow it to. We are all Americans."