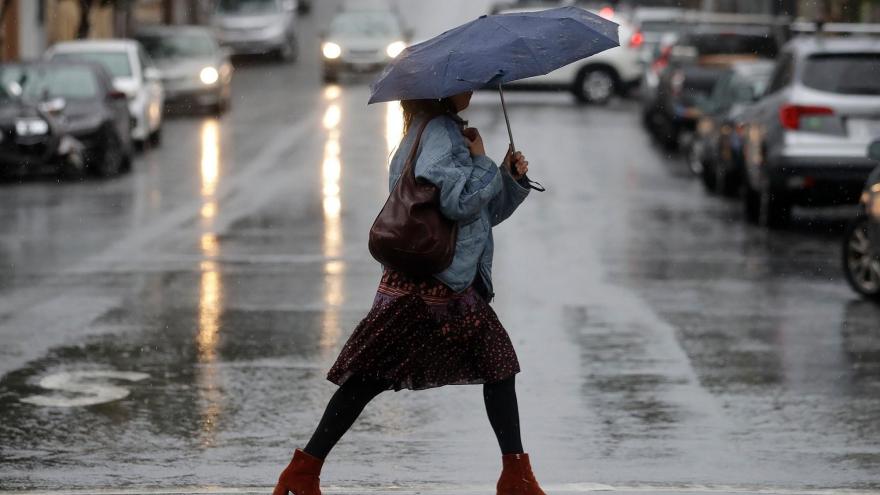 A woman walking in the rain in San Francisco.

(CNN) -- Millions of people have been soaked by downpours, left in the dark or forced to shovel snow as powerful storms barrel through much of the US ahead of Thanksgiving.

Two massive systems were making it difficult for travelers taking to the roads and skies on Thanksgiving Eve. A combination of snow, rain and high winds has 32 states under some sort of watch, warning or weather advisory.

One system is hammering the Western states with rain along the coast and heavy snow in the mountains; on the other coast, high winds are knocking out power while New England and Maine residents brace for heavy snow.

"I'm keeping my fingers crossed, I'm asking everyone -- keep the City of New York in your thoughts and prayers so the wind will stay calm and we will be able to let these balloons fly," De Blasio said Wednesday as the balloons were being inflated. "We're hopeful. We're hopeful."

The balloons can't be flown when sustained winds exceed 23 mph and gusts exceed 34 mph, per New York City regulations. There's good reason for that. In 1997, the Cat in the Hat balloon injured four people after intense winds forced it astray.

Nearly 300,000 homes and businesses were without power across the country Wednesday. As of 7 p.m. ET, most of the outages were in Michigan, Ohio and California, according to utility tracking site poweroutage.us.

Powerful winds and heavy rain in the West

A bomb cyclone -- a type of rapidly strengthening storm -- began dumping rain over parts of the West on Tuesday night, and more rainfall is expected through Thanksgiving. Winter storm watches, warnings and advisories touch parts of every western state from Arizona to Montana.

The storm was "historic" and "unprecedented" because it set November low-pressure records in parts of Oregon and Northern California, the National Weather Service said.

The system has weakened some, but "it remains a very large system with impacts expected across a large portion of the nation to the west of the Rockies over the next several days," the weather service said Wednesday afternoon.

There were reports of heavy snow -- with some mountain ranges in eastern California measuring snow piles in feet Wednesday, the weather service said.

In Oregon, Department of Transportation officials reported whiteout and blizzard conditions, urging drivers in affected roadways to pull over. In Arizona, the weather service warned of "impossible travel conditions" Thursday and early Friday with heavy and drifting snow.

Significant travel delays and road closures because of dangerous travel conditions were also expected across California, the service said.

Heavy rains will also pose a flash-flooding threat in Southern California through Thanksgiving, and in the Southwest by early Friday, the weather service said.

In Santa Barbara County, officials warned that heavy rain could cause dangerous debris flows at and below the areas burned this week by the Cave Fire. "If you live or are near creeks and streams be aware that they may experience high flows and can rise quickly. If a debris flow occurs, and it is unsafe to leave, or you are unable to leave, go to high ground," the county said.

Another major storm has Midwest residents digging out from snow-covered cars and sidewalks and struggling with slick roads.

The city of Minneapolis declared a snow emergency due to the blizzard conditions. More than 7 inches of snow have fallen since midnight, making it the biggest Thanksgiving eve storm in decades, the weather service said.

Parts of Michigan have seen 15 inches of snow and nearly 14 inches were reported in Wisconsin.

The storm had unleashed powerful winds, snow and rain over the Plains before moving over the upper Midwest on Wednesday, dumping snow from Nebraska to Wisconsin, CNN meteorologist Michael Guy said.

It will continue moving north and east, not only bringing snowfall but fierce winds to the Great Lakes and into the Northeast before exiting into the Atlantic by Thanksgiving morning.