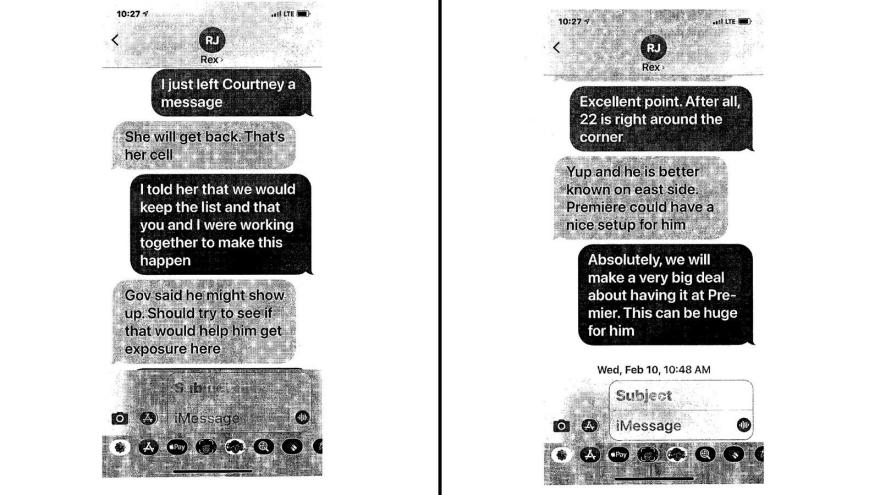 Text messages between Manatee County commissioner and a wealthy developer show that a planned vaccination drive largely serving a wealthy, gated community may give Governor Ron DeSantis "exposure here" ahead of a potential 2022 reelection campaign.

"Gov said he might show up," Jensen, the real estate developer of Lakewood Ranch, said in a text message that was sent before the vaccination drive began. "Should try to see if that would help him get exposure here."

CNN obtained the texts through a public records request.

"Excellent point," Baugh responded. "After all, 22 is right around the corner."

"Yup and he is better known on east side," Jensen replied. "Premiere (the vaccination site) could have a nice setup for him."

"Absolutely, we will make a very big deal about having it at Premier," Baugh said. "This can be huge for him."

CNN reached out to Jensen, Baugh and DeSantis for comment, but did not immediately receive a response.

DeSantis, a Republican, did not directly respond to the texts when asked about it in a news conference on Tuesday. Instead, he emphasized the vaccine drive was done to help Manatee County raise the vaccination rates of residents age 65 and older. He pivoted to a conspiracy theory, claiming that, "partisan corporate media" was "demonizing" the drives because they didn't want "people being vaccinated who disagree with them politically."

Although it's widely suspected he will run for reelection in 2022, DeSantis has not yet announced that he is running for reelection.

The Tampa Bay Times and Bradenton Herald were first to report on the text messages.

Baugh and Jensen are responsible for initiating the now heavily criticized vaccine drive at Manatee County, Florida's Lakewood Ranch in mid-February. Baugh, herself, has previously admitted that she directed county employees to limit the vaccine drive to residents from two ZIP codes that largely made up the wealthy community.

The text messages come at a time when DeSantis, and the commissioner, face bipartisan calls for investigations into the Manatee County vaccine drive.

Crist's spokesperson Samantha Ramirez told CNN they had not yet heard back from the DOJ and deferred further comment to the Crist campaign.

"The more we learn about Governor DeSantis's abuse of power, the worse it is. We already knew the Governor was directing vaccines to his favored donors and constituents," Joshua Karp, a spokesperson for Crist's reelection told CNN in a statement. "Now it's clear that the Governor's team handpicked vaccine recipients, bypassing a county's random selection process -- for political gain -- denying seniors and others the vaccines they need. The authorities must investigate this abuse of power immediately."

In a recent interview with Bay News 9, Crist said he was considering running for governor again.