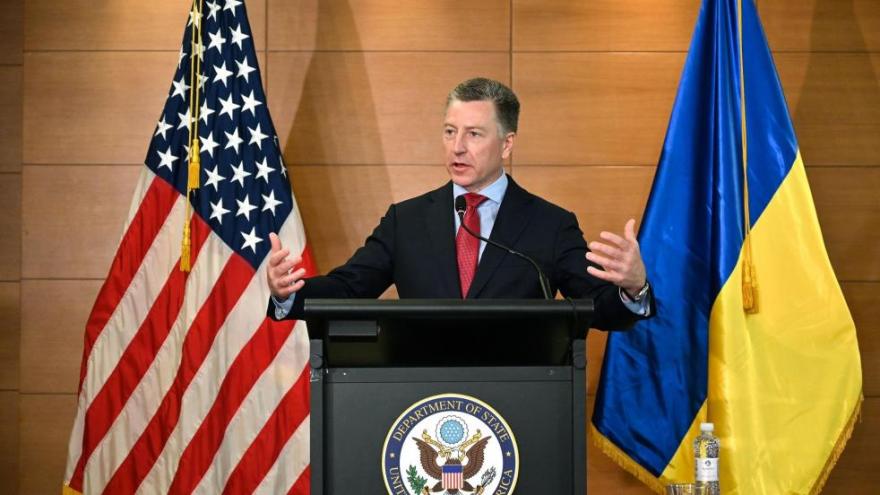 Two of President's Donald Trump's top envoys to Ukraine drafted a statement for that country in August that would've committed Ukraine to launching investigations into the President's political rivals, The New York Times reported Thursday citing three people briefed on the effort.

(CNN) -- Text messages released on Thursday between US diplomats and a senior Ukrainian aide show how a potential Ukrainian investigation into the 2016 election was linked to a desired meeting between Ukrainian President Volodymyr Zelensky and US President Donald Trump.

The text messages, which were released by the House Intelligence Committee, underscore how Trump's personal attorney, Rudy Giuliani, was closely connected to US policy on Ukraine and was involved in setting up the July 25 phone call between Trump and Zelensky, in which Trump also urged an investigation into former Vice President Joe Biden and his son, Hunter Biden.

They show how cognizant the Ukrainians were about the importance of the election investigation to Trump and Giuliani's role.

On the morning of the call, in an exchange with a key adviser to the Ukrainian President, then-US Special Envoy for Ukraine Kurt Volker made clear that it was important to the White House that Zelensky convince Trump that an investigation into the 2016 election would happen.

"Heard from the White House -- assuming President Z convinces trump he will investigate/'get to the bottom of what happened' in 2016, we will nail down date for visit to Washington," Volker said via text to the Ukrainian adviser on the morning of July 25.

Volker provided Congress with the text messages ahead of his closed-door congressional testimony on Thursday before three committees leading the House's impeachment inquiry into Trump and Ukraine.

The messages released by Democrats on the House Intelligence Committee add a new layer of detail to the whistleblower complaint that prompted the impeachment inquiry, which alleged that Trump had urged the Ukrainian government to dig up dirt on his political rival, Democratic presidential candidate Joe Biden.

That Trump wanted an investigation was a message that seemed to register with the Ukrainian administration. Volker and the Ukrainian adviser, Andrey Yermak, continued to text after the call about Zelensky making a public statement ahead of a meeting between the two leaders.

"I think potus really wants the deliverable," US Ambassador to the European Union Gordon Sondland texted Volker on August 9, as the two were talking about possible dates for a meeting.

"Once we have a date, will call for a press briefing, announcing upcoming visit and outlining vision for the US-UKRAINE relationship, including among other things Burisma and election meddling in investigations," Yermak wrote to Volker the following day.

A source familiar with the matter tells CNN that the Ukrainian government wrote the initial draft of a statement for public release, committing to pursue investigations of corruption.

The source told CNN that the Ukrainians drafted the statement to demonstrate to Trump and Giuliani, who they knew had influence with Trump, that there was a new team in Ukraine with Zelensky that was committed to cleaning up corruption.

The statement was shared with Volker and Sondland, who then shared it with Giuliani, according to the source. Giuliani told Volker that it did not go far enough and suggested inserting references to pursuing probes of Burisma and the 2016 election, although it did not mention the Bidens. Burisma is the Ukrainian company that hired Hunter Biden to be on its board.

Volker and Sondland then exchanged text messages about the draft, which Volker said he would share with an adviser to Zelensky. The Ukrainians told Volker they were not comfortable with the suggested statement, and the matter was ultimately dropped while a meeting between Zelensky and Trump continued to be pursued, the source said.

The source explained the context of the statement about the investigation after the discussion was included in the text messages provided to Congress ahead of Volker's testimony.

Giuliani told CNN after The New York Times first reported the existence of the statement that he "never saw it or even draft of it."

"This is their testimony if it is and not part of my role," he texted. "They have to explain it. Lots of things going on I didn't know about."

'it's crazy to withhold security assistance'

Ahead of the July 25 phone call between Trump and Zelensky, the text messages show how Giuliani was pushing for the call and for Zelensky to talk up the investigation.

"Had breakfast with Rudy this morning—teeing up call with Yermak Monday," Volker wrote to Sondland on July 19. "Must have helped. Most (important) is for Zelensky to say that he will help investigation—and address any specific personnel issues—if there are any."

A rough transcript released by the White House shows that during the call, Trump repeatedly pushed Zelensky to investigate Biden, Trump's potential 2020 political rival, and his son.

There is no evidence of wrongdoing by Joe or Hunter Biden.

Volker testified to the House committees Thursday that he had urged the Ukrainians not to interfere in US politics, and that the Ukrainians were concerned about the meeting being put on hold, according to two sources familiar with the testimony.

In August, it was publicly revealed that the Trump administration was holding up foreign aid to Ukraine, although the whistleblower complaint had not yet been made public.

Behind the scenes, concerns were being raised by a senior US diplomat in Ukraine, Bill Taylor, that the aid had been held up.

"Are we now saying that security assistance and WH meeting are conditioned on investigations?" Taylor texted Sondland on September 1.

"Call me," Sondland responded. The context of Taylor's text message is not clear from the messages released by the committee.

A week later, Taylor was even more concerned, texting Sondland: "As I said on the phone, I think it's crazy to withhold security assistance for help with a political campaign."

Sondland responded, "Bill, I believe you are incorrect about President Trump's intentions. The President has been crystal clear no quid pro quo's of any kind. The President is trying to evaluate whether Ukraine is truly going to adopt the transparency and reforms that President Zelensky promised during his campaign."

Sondland then suggested that if Taylor had additional concerns, he should reach out to Secretary of State Mike Pompeo's assistant.

This story has been updated following multiple developments.