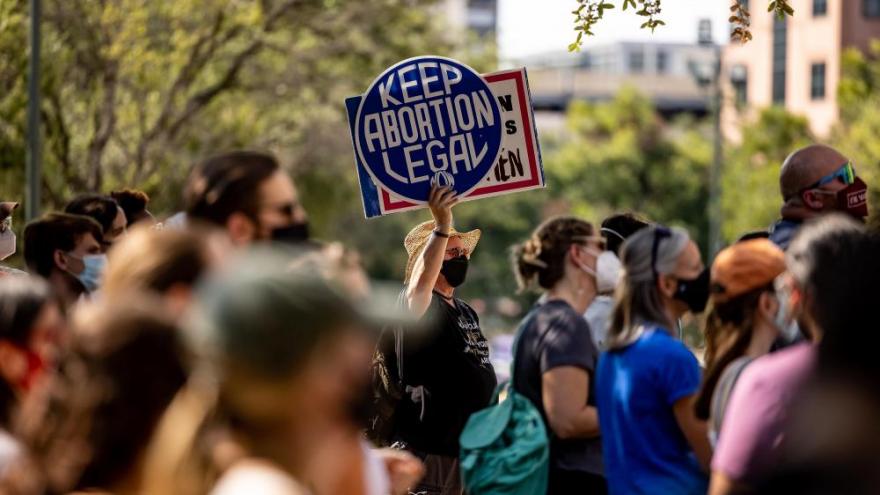 Texas Lawmakers recently passed several pieces of conservative legislation, including SB8, which prohibits abortions in Texas after a fetal heartbeat is detected on an ultrasound, usually between the fifth and sixth weeks of pregnancy.

(CNN) -- The Texas Supreme Court on Friday issued a ruling that effectively foreclosed the last avenue abortion clinics had to challenge the state's six-week limit on abortions in their current federal litigation.

This stage of the legal dispute before the Texas Supreme Court centered on the role state licensing officials did or did not have in enforcing the six-week ban, which the US Supreme Court has allowed to remain in effect.

"Texas law does not grant the state-agency executives named as defendants in this case any authority to enforce the Act's requirements," the Texas court wrote.

While dismissing most of a federal lawsuit that sought to preemptively block the law, the US Supreme Court ruled in December that abortion clinics could proceed in their lawsuit against a handful of state licensing board officials. The clinics warned that those officials could sanction providers for facilitating abortions outlawed by the ban.

However, on Friday, the state Supreme Court said that in its reading the law, known as Senate Bill 8, the officials did not play a direct or indirect role in its enforcement. The proceedings will now move back to the US 5th Circuit Court of Appeals, where it is likely the appellate court will now throw out what's left of the clinics' lawsuit.

The law allows for people anywhere in the country to bring private state court lawsuits against those who facilitate an abortion after fetal cardiac activity is detected. That point is around six weeks into the pregnancy, when many people don't know yet they are pregnant.

The US Supreme Court had said in its December 5-4 ruling that the clinics could not seek federal court orders that would preemptively block state court officials from presiding over private enforcement lawsuits.

The proceedings then traveled back to the 5th US Circuit Court of Appeals, perhaps the most conservative federal appeals court in the country. Before the appellate court moved forward with the clinics' litigation against the state licensing officials, the 5th Circuit asked the Texas Supreme Court to weigh in on what role those officials played.

Clinics opposed the move to send the proceedings to the Texas Supreme Court, arguing that the move amounted to a second-guessing of a determination the US Supreme Court had already made. Texas, meanwhile, pointed to the hedged language Justice Neil Gorsuch used in that section of the majority opinion.

With its ruling on Friday, the Texas Supreme Court sided with the state's arguments.

"We agree that these laws grant the state agencies and their executives broad authority to enforce other state laws -- including abortion-restriction laws -- through the professional-disciplinary process, at least unless the other laws provide otherwise," the Texas Court wrote. "But we conclude that the Heartbeat Act expressly provides otherwise."

Six months that six-week abortion ban has been in effect

Besides a single day that the law had been blocked by a federal judge in Austin, abortions after six weeks have been banned in Texas since the law's September 1 implementation date. Pointing to the threat of litigation under the law, Texas clinics have not performed abortions outlawed by SB8, even as abortion rights advocates say the law is plainly unconstitutional under the US Supreme Court precedent that protects abortion rights through fetal viability, a point around 23 weeks into the pregnancy.

The US Supreme Court has before it a separate abortion case, arising from a 15-week ban from Mississippi, where the conservative majority is expected to scale back or fully overturn that precedent. The decision will likely come down in late spring or early summer.

In the meantime, providers have been left with few options for fighting the Texas law in court. The challenges to the law abortion rights advocates have brought in state court have become mired in procedural disputes.

It's unclear whether the latest legal development will prompt clinics to resume the procedures currently outlawed by the law. If they do so, they may be met with a private enforcement action that could give providers another avenue to challenge the law's constitutionality.

Since the law has gone into effect, out of state clinics have been flooded with Texas patients.

According to data recently released by providers, Planned Parenthood clinics in five states near Texas saw a nearly 800% increase in abortion patients from Texas.

The surge of Texas patients has increased wait times for clinics in neighboring states.

"The situation is becoming increasingly dire, and now neighboring states -- where we have been sending patients -- are about to pass similar bans. Where will Texans go then?" Amy Hagstrom Miller, president and CEO of Whole Woman's Health and Whole Woman's Health Alliance, said after the decision. "The more states that pass these bans, the harder it will be for anyone in this region to get abortion care."

In a statement, Texas Right To Life -- which was active in pushing the ban through the legislature -- said Friday's ruling was a "a big victory for the life-saving Texas Heartbeat Act."

"We're grateful that the Texas Heartbeat Act will continue saving thousands of lives, and we're hopeful that the judiciary will soon pave the way to protect all preborn children by overturning Roe v. Wade," the statement said.