Texas produces more power than any other state. Here's why it went dark anyway 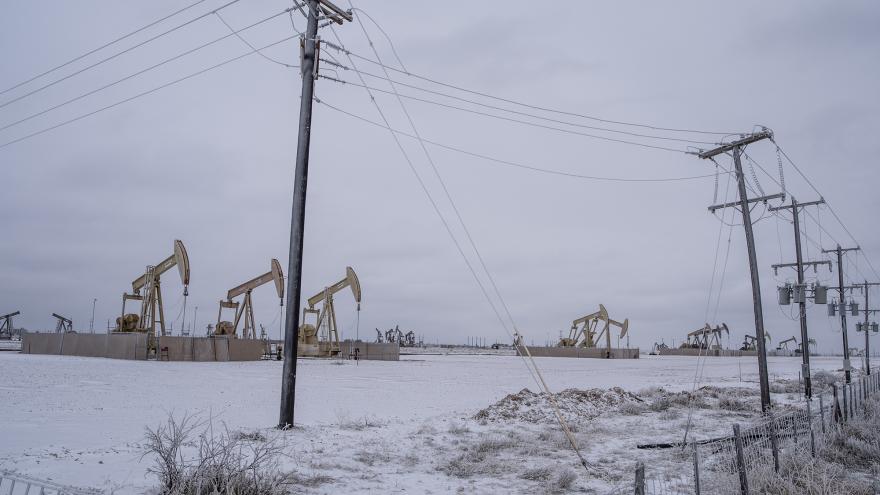 (CNN) -- Even mighty Texas, the energy powerhouse of America, is feeling the wrath of Mother Nature.

A deep freeze this week in the Lone Star state, which relies on electricity to heat many homes, is causing power demand to skyrocket. At the same time, natural gas, coal, wind and nuclear facilities in Texas have been knocked offline by the unthinkably low temperatures.

This situation could have wide-reaching implications as the US power industry attempts to slash carbon emissions in response to the climate crisis.

That nightmarish supply-demand situation has sent electricity prices in energy-rich Texas to skyrocket more than 10,000% compared with before the unprecedented temperatures hit. Texas has been hit with life-threatening blackouts. More than 4 million people in the state were without power early Tuesday.

Although some are attempting to pin the blame on one fuel source or another, the reality is that the Arctic temperatures are hobbling fossil fuels and renewable energy alike.

"The extreme cold is causing the entire system to freeze up," said Jason Bordoff, a former energy official in the Obama administration and director of Columbia University's Center on Global Energy Policy. "All sources of energy are underperforming in the extreme cold because they're not designed to handle these unusual conditions."

The ripple effects are being felt around the nation as Texas' prolific oil-and-gas industry stumbles.

Motiva's sprawling Port Arthur oil refinery, the largest in the United States, shut down Monday, citing "unprecedented freezing temperatures." About 2.5 million barrels per day of refining capacity was shut between Houston and Louisiana, according to Rystad Energy.

Countless drillers went offline as temperatures in the Permian Basin, the nation's fracking capital, plunged below zero. The supply shortfall helped send US oil prices above $60 a barrel for the first time since January 2020.

Prices at the pump are also on the rise. The national average could easily rise 15 cents per gallon over the next week or two, according to Patrick De Haan, head of petroleum analysis at GasBuddy.

Texas is No. 1 in natural gas, oil and wind

It's striking that these power outages are happening in a state with abundant energy resources. Texas produces more electricity than any other US state — generating almost twice as much as Florida, the next-closest, according to federal statistics.

Texas is the No. 1 US state in both crude oil and natural gas, according to the US Energy Information Administration. The state accounted for a staggering 41% of America's oil production in 2019 and a quarter of its marketed natural gas output.

Wind power is also booming in Texas, which produced about 28% of all the US wind-powered electricity in 2019, the EIA said.

But the problem is that not only is Texas an energy superpower, it tends to be an above-average temperature state. That means its infrastructure is ill-prepared for the cold spell currently wreaking havoc. And the consequences are being felt by millions.

It's not just wind power

Critics of renewable energy have pointed out that wind turbines have frozen or needed to be shut down due to the extreme weather.

And that is significant because almost a quarter (23%) of the power in Texas last year was generated by wind power, according to the Electric Reliability Council of Texas (ERCOT).

Even though other places with colder weather (like Iowa and Denmark) rely on wind for even larger shares of power, experts said the turbines in Texas were not winterized for the unexpected freeze.

But this is not just about wind turbines going down. Natural gas and coal-fired power plants need water to stay online. Yet those water facilities froze in the cold temperatures and others lost access to the electricity they require to operate.

"The ability of some companies that generate the power has been frozen. This includes the natural gas & coal generators," Texas Governor Greg Abbott wrote on Twitter.

And that's an even bigger deal to Texas than frozen wind turbines because combined cycle natural gas (40%) and coal (18%) generated more than half of the state's power in 2020, according to ERCOT.

'Power prices going to the moon'

Nuclear also depends on water to operate and at least one unit in South Texas shut down, according to the Nuclear Regulatory Commission. Texas gets about 11% of its power from nuclear.

"Even if Texas did not have wind power, you would still have power prices going to the moon," said Matthew Hoza, manager of energy analysis at BTU Analytics.

The problem, according to Hoza, is that a lot of companies in Texas did not invest in cold protection for power plants and natural gas facilities.

"When you're in West Texas, are you really going to spend money on that equipment?" Hoza said.

Isolated from the national grid

It's too early to definitively say what went wrong in Texas and how to prevent similar outages. More information will need to be released by state authorities.

"In terms of the blame game, the focus on wind is a red herring. It's more of a political issue than what is causing the power problems on the grid," said Dan Cohan, associate professor of environmental engineering at Rice University.

Cohan said there was a far greater shortfall in terms of the amount of power Texas was expecting from natural gas than wind.

The energy crisis in Texas raises questions about the nature of the state's deregulated and decentralized electric grid. Unlike other states, Texas has made a conscious decision to isolate its grid from the rest of the country.

That means that when things are running smoothly, Texas can't export excess power to neighboring states. And in the current crisis, it can't import power either.

"When it comes to electricity, what happens in Texas stays in Texas," Cohan said. "That has really come back to bite us."