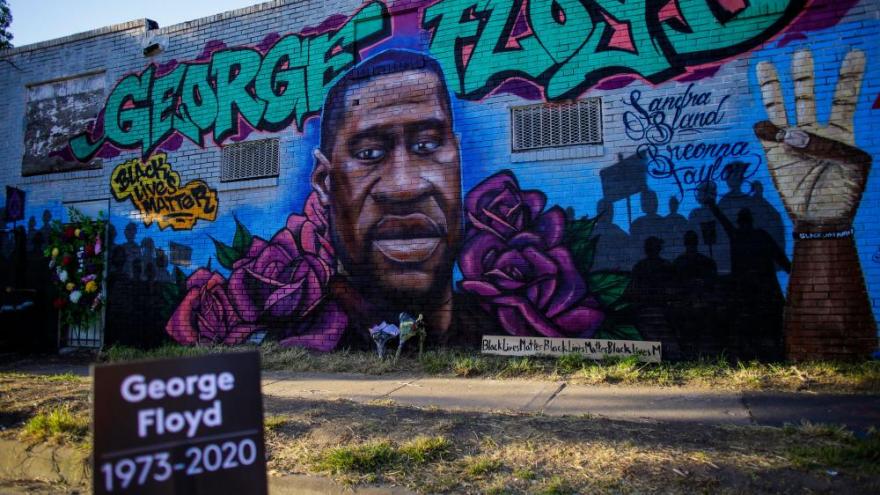 Local officials in Texas unanimously passed a resolution on Tuesday calling for a posthumous pardon for George Floyd on a drug charge from more than 15 years ago. A mural of George Floyd is shown here on the side of a building in Houston, Texas.

(CNN) -- Local officials in Texas unanimously passed a resolution on Tuesday calling for a posthumous pardon for George Floyd on a drug charge from more than 15 years ago.

Floyd died in May of 2020 after former Minneapolis Police officer Derek Chauvin knelt on his neck for over nine minutes. Chauvin was convicted last month of two counts of murder and one count of manslaughter.

In 2004, Floyd was convicted on a drug charge for an alleged sale of $10 of crack cocaine in Texas.

At the time, Floyd pleaded guilty and was sentenced to 10 months of jail time, according to a resolution put forth by the Harris County Commissioners Court.

But the conviction relied solely on the singular testimony of former Houston Police Detective Gerald Goines, the resolution states, who has been accused of lying to obtain a warrant in 2019 and has been indicted on two charges of felony murder and tampering with a government record. Other cases linked to Goines have already been overturned, the resolution states.

Shareeduh Tate, Floyd's cousin and president of the George Floyd Foundation, addressed the Commissioners Court on Tuesday ahead of the vote.

"I am so grateful that we have an opportunity right now to right the wrong that occurred in this wrongful conviction," Tate said. "I think he deserves the pardon ... He did not commit that crime and it should be on record that he did not."

Tera Brown, another cousin of Floyd, also expressed her full support of the pardon.

"I think that this is a phenomenal opportunity to fix the miscarriage of just in George's case," Brown said.

With the passing of this resolution, the court has officially requested the pardon -- but it's now up to the Board of Pardons and Paroles and Texas Gov. Greg Abbott to sign off.

"Mr. Floyd and his family deserve vindication, which is possible through a full pardon in this case," Commissioner Rodney Ellis, who introduced the resolution, wrote in a tweet. "We must continue working to find alternatives to mass incarceration and provide legal defense for all residents. With the adoption of this resolution, justice rings."