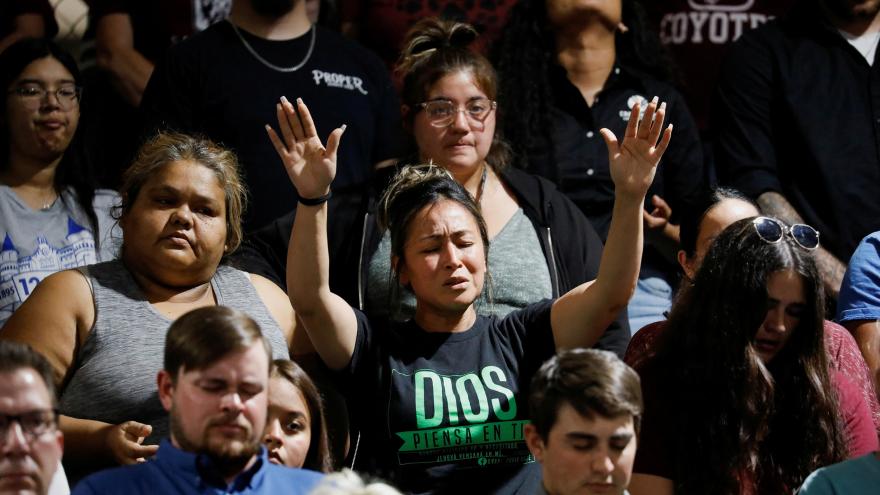 (CNN) -- Today should have been a joyous day at Robb Elementary School as kids celebrated the last day of classes before summer vacation.

Instead, the families of 19 students and two teachers in Uvalde, Texas, are planning funerals. Hundreds of classmates are traumatized by a heinous slaughter.

Andnearly 48 hours later, serious questions still remain about how an 18-year-old with an assault-style rifle got inside the school, what law enforcement did in response and how the gunman was able to remain inside for as long as an hour before a tactical team finally forced its way in and killed him.

"We're trying to establish every single timeline as far as how long the shooter was inside the classroom, how long did the shooting take place, but as of right now, we have not been able to establish that," Texas Department of Public Safety spokesman Chris Olivarez said Thursday morning.

The massacre marked the deadliest US school shooting in nearly a decade and at least the 30th school shooting at a K-12 school in 2022. And it has thrown the nation -- where active shooter attacks jumped more than 50% last year -- yet again into a fury of anger and grief amid renewed calls for gun reform.

Olivarez offered several more details Thursday about the attack. He said the gunman, identified as Salvador Ramos, first shot his grandmother, drove to the school grounds and then gained access to the school through an unlocked door.

A school resource officer who was on the scene was armed, but it was unclear if the officer fired or what he did in response to the suspect's entry, Olivarez said. "We're trying to establish exactly what was his role and how did he encounter the shooter," he said. Two Uvalde Police officers followed behind the gunman into the school and were both shot, he said.

The gunman then entered a classroom, which was attached to an adjoining classroom, and barricaded himself inside for about 40 to 60 minutes, Olivarez said. All of the 21 killed and 17 injured were inside those classrooms, officials have said.

The lengthy barricade situation raises serious questions about how police responded to the shooting. Since the Columbine school shooting of 1999, emergency protocol in such situations is to end the threat as quickly as possible because fatalities occur in seconds to minutes.

"It's almost incomprehensible for me to come up with a rational explanation as to why you would wait 30 minutes to an hour to get in there," said Andrew McCabe, CNN senior law enforcement analyst. "The door breaching, if it's just a locked door, that doesn't take 30 minutes to get into."

What happened outside the classrooms

A tactical team was ultimately able to force their way inside the school and kill the suspect, Texas Department of Public Safety Director Steven McCraw said.

US Border Patrol Chief Raul Ortiz said about 80 to 100 agents responded to the shooting and acted immediately.

"They didn't hesitate. They came up with a plan. They entered that classroom and they took care of the situation as quickly as they possibly could," Ortiz said.

During the standoff, frustrated and distraught parents and other adults outside the school clashed with law enforcement officers, urging the officers to go inside and get the gunman or to let them go inside themselves, video posted to social media appears to show.

"And then (the shooting) stops, and he barricades himself in. That's where there's kind of a lull in the action," Rep. Tony Gonzales, whose district includes Uvalde, said, citing what he learned in a briefing.

"All of it, I understand, lasted about an hour, but this is where there's kind of a 30-minute lull. They feel as if they've got him barricaded in. The rest of the students in the school are now leaving."

Early in the attack, it didn't take long for Javier Cazares to learn something was happening at his daughter's school. He was running errands nearby when he rushed to Robb Elementary, where several other parents had gathered, Cazares told the Washington Post. Soon, they started hearing gunshots.

"There were five or six of (us) fathers, hearing the gunshots, and (police officers) were telling us to move back," Cazares told the Post.

"We didn't care about us. We wanted to storm the building. We were saying, 'Let's go,' because that is how worried we were, and we wanted to get our babies out."

What happened inside the classrooms

Victims' family members and first responders offered first descriptions of some of the horrors inside the classrooms.

Angel Garza, a first responder and father of 10-year-old Amerie Jo Garza, arrived at the school Tuesday and gave medical aid to a girl covered head-to-toe in blood. The girl said she'd seen her best friend killed -- and the best friend's name was Amerie.

"How you are going to look at this girl and shoot her?" Garza told CNN on Wednesday. "My baby, how do you shoot my baby?"

Amerie had just gotten a cell phone two weeks ago for her 10th birthday, he said. He learned from two other students that Amerie had tried to call 911 during the shooting.

"She just died trying to save her classmates," Garza said. "She just wanted to save everyone."

Chief Jason Owens, who heads the Del Rio sector for Border Patrol, told CNN that the uniforms of the agents who responded to the scene were "covered in blood."

"I took my agents back to the Uvalde station. I had to bring new uniforms for them to change into," he said.

Families identify loved ones they lost

The two teachers who were killed, Eva Mireles and Irma Garcia, had co-taught together for five years.

Garcia, a wife and mother to four children, was "sweet, kind, loving," according to a GoFundMe campaign set up to raise funds for funeral expenses and family needs. "She sacrificed herself protecting the kids in her classroom. She was a hero. She was loved by many and will truly be missed," the campaign said.

Mireles had been teaching for 17 years and "was a vivacious soul" who "spread laughter and joy everywhere she went," relative Amber Ybarra told CNN.

"She made you feel like she was only teaching your child," said Erica Torres, whose son Stanley was in her third and fourth grade classes. "Like, there's no other students but him. She made you feel so good."

José Flores Jr., 10, was also killed in the shooting, his father José Flores Sr. told CNN. He was his mother's "little shadow," she said. José Jr. was bursting with energy and loved to play baseball and video games, his father said.

Lexi Rubio, 10, had made the All-A honor roll and gotten a good citizen award just hours before she was shot and killed, her parents Felix and Kimberly Rubio told CNN.

"We told her we loved her and would pick her up after school. We had no idea this was goodbye," Kimberly Rubio wrote in a post on Facebook.

Nine-year-old Eliana "Ellie" Garcia, was among those killed, family members confirmed to CNN affiliate KHOU. She loved the movie "Encanto," cheerleading and basketball and dreamed of becoming a teacher, her grandparents, Rogelio Lugo and Nelda Lugo, told the LA Times.

Third-grader Annabell Guadalupe Rodriguez, 10, and her cousin died Tuesday, her family members confirmed to CNN affiliate KHOU. The cousin's name has not been released.

Shooter was a loner who bought two rifles a week earlier

The gunman, Ramos, was a local high school dropout with no criminal history and no known mental health history, officials said. He had just turned 18 and legally bought two AR-15-style rifles and ammunition for his birthday. Those who knew him described him as a loner with few, if any, friends, who was often in fights.

Before he began his rampage, Ramos allegedly messaged a girl who lives in Germany about his intentions.

He complained his grandmother was "on the phone with AT&T abojt (sic) my phone," according to screenshots reviewed by CNN and an interview with the 15-year-old girl, whose mother gave permission for her to be interviewed.

"It's annoying," he texted her.

The girl began chatting with Ramos on a social media app on May 9, she told CNN. Ramos sent her selfie videos and talked about a plan to visit her in Europe, videos and text messages show.

The shooter shot his 66-year-old grandmother in the face before driving to the Robb Elementary, where he crashed his car in a nearby ditch, authorities say. The grandmother was in serious condition as of Wednesday, officials said.

His grandfather didn't know Ramos had guns, he said Wednesday.

"If I had known, I would have reported him," Rolando Reyes said.

NRA conference still on for this weekend

The United States has far more guns than any other developed country in the world and also has the world's highest firearm homicide rate.

As Uvalde families are overwhelmed with grief, city officials in Houston are facing calls to cancel the National Rifle Association's annual meeting there this weekend. But the city cannot cancel its agreement with the NRA, citing contractual obligations, Houston Mayor Sylvester Turner said.

Still, the mayor urged legislators and officials not to participate in the event and said the NRA should postpone it.

"Certainly they don't have to come, and I think it would be respectful for the families who are planning funerals for their children for them not to come," said Turner. "You should not come."

The NRA condemned the shooting in a statement Wednesday, calling it a "horrific and evil crime."

"Although an investigation is underway and facts are still emerging, we recognize this was the act of a lone, deranged criminal," the group said. "As we gather in Houston, we will reflect on these events, pray for the victims, recognize our patriotic members, and pledge to redouble our commitment to making our schools secure."

Texas Gov. Greg Abbott, who is scheduled to speak at the NRA conference, argued Wednesday tougher gun laws aren't a "real solution" and said state officials are discussing how to keep schools safe and address people with mental health challenges.

At his news conference, the governor and other officials were confronted by Democratic gubernatorial nominee Beto O'Rourke.

"This is on you, until you choose to do something different," O'Rourke said to Abbott, calling the shooting in Uvalde predictable. "This will continue to happen. Somebody needs to stand up for the children of this state or they will continue to be killed, just like they were killed in Uvalde yesterday."

National-level officials have also spoken out about Tuesday's shooting, including US Centers for Disease Control and Prevention Director Dr. Rochelle Walensky, who called it "a reminder that gun violence is a serious public health threat that must be addressed," according to a statement.