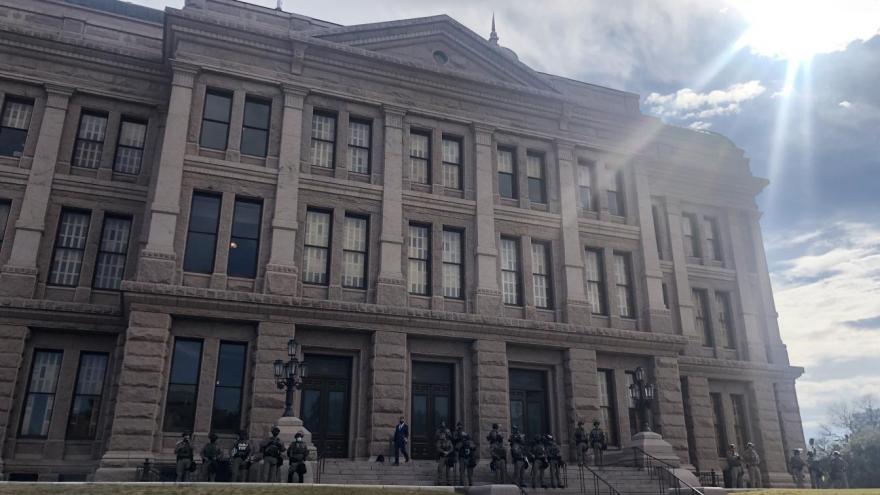 A controversial proposal to allow Texans to carry handguns in public without obtaining a license or training passed the state Senate Wednesday, putting Texas on track to potentially join a handful of others that have passed permitless carry laws this year.

(CNN) -- A controversial proposal to allow Texans to carry handguns in public without obtaining a license or training passed the state Senate Wednesday, putting Texas on track to potentially join a handful of others that have passed permitless carry laws this year.

More than a dozen states have introduced measures this year to allow residents to carry guns in public without a license, according to Brady, a gun control advocacy group. Gun safety advocates said it's not unusual for states to introduce such proposals but said the measures appear to be gaining steam.

So far this year, five states -- Iowa, Tennessee, Montana, Utah and Wyoming -- have passed legislation allowing some form of permitless carry. The bills are an indication of how conservative lawmakers and gun lobbyists are making inroads at expanding gun rights at the state level, even as lawmakers in Washington debate more gun restrictions.

"I think this dynamic that we're seeing is the political pendulum swinging," said Shannon Watts, the founder of Moms Demand Action, a group supporting gun safety measures. "There are some extremist Republican legislatures that are polarized, and they have been more successful and determined really to ignore the will of their constituents."

The Texas Senate passed the bill in an 18-to-13 party line vote after hours of debate on Wednesday. The permitless carry bill already passed the Texas House, but the legislation will have to return to the House before a reconciled bill can make its way to the governor's desk.

Republican Gov. Greg Abbott has already indicated he would sign the bill if it's passed.

"I'll be signing it," Abbott told a Texas radio host in late April. "I support it and I believe it should reach my desk and we should have 'constitutional carry' in Texas."

In Texas, similar permitless carry proposals have stalled in recent years. But conservatives, under pressure from the gun lobby, propelled the legislation forward this year over the objection of Democrats, gun control advocates and many law enforcement officials.

"Normally you make a law to fix something that's broken," said Ray Hunt, executive director of the Houston Police Officers' Union, one of the law enforcement organizations opposing the legislation. "The system that we have in place is working."

'If you possess a firearm, you should be able to carry a firearm'

Nineteen states allow permitless carry or have laws set to go into effect in the coming months, according to Cassandra Crifasi, the deputy director for the Johns Hopkins Center for Gun Violence Prevention and Policy, who is currently studying permitless carry policies.

But Texas would be by far the largest state to allow its gun owners to carry their weapons in public without a license, if the bill passes.

Texas already allows citizens to carry rifles openly without a license. But under current Texas law, residents must have a license to carry an open or concealed handgun. As part of the licensing process, residents must submit a fingerprint, undergo a background check, participate in a training course and pass a shooting proficiency test.

The state, which has a strong gun culture, counts more than 1.6 million individuals with active licenses to carry, according to the Texas Department of Public Safety.

Republican supporters of the permitless carry bill, who often refer to it as "constitutional carry," have argued that by removing the licensing requirement, they are removing an artificial barrier to residents' right to bear arms and ensuring more Texans have access to personal protection in public.

"This bill, to me, is a restoration of the belief in and trust of our citizens," said Texas state Sen. Charles Schwertner, a Republican and the bill's sponsor. "If you possess a firearm, you should be able to carry a firearm."

But Democrats warned that the bill removes provisions -- from background checks to firearms training -- that help protect the public.

"Right now, you're pretty much taking away a lot of the safeguards that we have in place," said Texas state Sen. Juan "Chuy" Hinojosa, a Democrat. "We're allowing people who possibly couldn't hit the side of a barn to carry a gun in public."

Democrats and law enforcement officials alike have noted that federal background checks only apply to those buying guns from licensed dealers and the background check in the licensing process was a step in addressing that loophole and weeding out people who should not be carrying guns in public.

Roughly 22% of gun owners in the US acquired a recent firearm without a background check, according to a 2015 survey published in the Annals of Internal Medicine. Another study based on prison inmates found that more than 96% of gun offenders, who were legally prohibited from obtaining their weapon, acquired guns from a supplier that was not required to conduct a background check.

Schwertner noted that Texans would still be personally responsible for learning to handle their weapons and said other federal and state laws dictate who is prohibited from carrying a weapon.

"A felon is going to get a gun if they want a gun, unfortunately," Schwertner added.

On guns, lawmakers at odds with constituents

While GOP lawmakers in Texas have jumped on board with the permitless proposal, voters don't share their sentiments. A majority -- 59% -- of Texas voters said they opposed unlicensed carry, according to a University of Texas/Texas Tribune Poll released Monday.

But the proposal was far more popular with Republicans. Some 56% of Republicans said unlicensed carry should be allowed. Meantime, 85% of Democrats opposed it.

"The thing that's alarming about it is there's still certain states -- and Texas has long been one -- where effectively the gun industry controls the agenda, not the people," said Brady president Kris Brown. "That is very concerning."

Texas law enforcement officers and gun violence experts alike expressed concerns that the proposed legislation would make it more difficult to determine who was unlawfully carrying a weapon and create additional stresses in interactions between the public and police.

"If law enforcement has no way of easily determining whether you're allowed to carry that gun around in public, that can create stressful and potentially dangerous situations," Crifasi, the permitless carry researcher, said. "I think that just increases the stakes in all of these potential police-civilian interactions."

Crifasi said their work has shown that permitless carry laws are associated with increases in violent crime as well as firearm homicide.

Hunt, of the Houston Police Officers' Union, said many officers are "very conservative folks" and are strong believers in Texans' Second Amendment rights.

He noted that the public is already clamoring for fewer and shorter interactions with police. Under current law, Hunt said, it's easy to look at someone's gun license and determine whether they are legally carrying. If licenses are no longer required, police will have to take additional steps to vet that person in real time, he said.