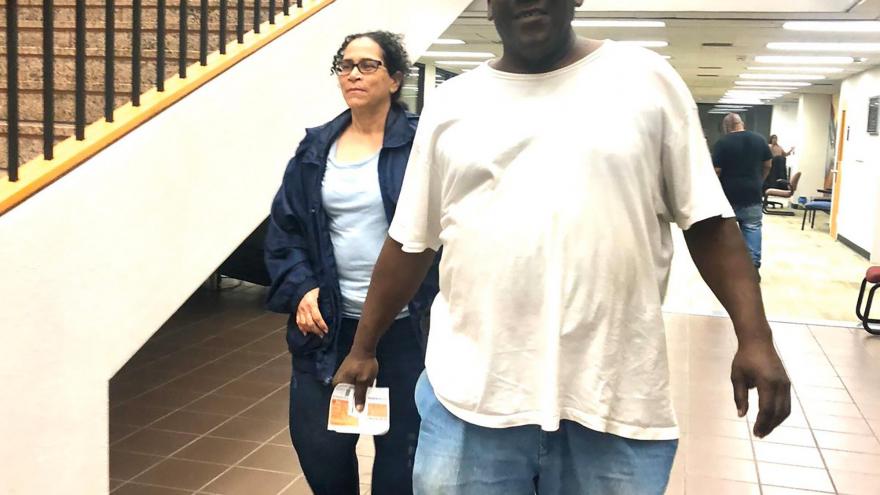 Hervis Rogers waited in line to vote for six hours.

(CNN) -- A Texas man who told CNN he waited for "a lit bit over six hours" at a polling center in Houston to participate in Super Tuesday last year was arrested and charged this week with two counts of illegal voting.

According to a June 24 indictment from the Texas attorney general's office, Hervis Earl Rogers, 62, voted in the November 6, 2018, general and special elections and the March 3, 2020, Democratic primary election despite being on felony parole for a 25-year sentence for burglary. Because he was on felony parole, he was ineligible to vote under Texas law, according to the Texas attorney general office.

He was previously convicted of felony burglary charges in 1989 and 1995, according to the indictment.

Rogers could face up to 40 years in prison for the two felony charges of illegal voting, a second degree felony in Texas. The person commits the offense if they knowingly vote or attempt to vote in an election in which they know they're ineligible.

In Texas, ex-felons are permitted to vote once they have completed both their sentences and all the terms of their supervised release, such as parole.

Rogers did not know that he was voting illegally, the American Civil Liberties Union of Texas, who is representing Rogers, told CNN Friday.

"That's why he went and stood in line for almost seven hours and spoke to CNN about it. He felt he was doing the right thing," Segura explained. "Where's the evidence he knew or intended to vote illegally?"

Lawyers are now trying to get an understanding of what the status of his criminal history was at the time he voted.

Segura said he believed that Rogers was no longer on parole as of a few months ago.

"(Attorney General Ken Paxton) wants to create a narrative of widespread voter fraud. We don't think this is a case that should gotten to this point," he said, also calling the charges against Rogers "a misuse of resources."

Segura said this sends a chilling signal that a possible innocent mistake can turn into something this serious.

Rogers was arrested Wednesday, according to his booking sheet, and held at Montgomery County Jail.

The Bail Project said in a statement Saturday that it had posted Rogers' $100,000 bail.

In the same statement Saturday, Segura said it's "a relief that Mr. Rogers is no longer in jail."

The charges against Rogers come as the Texas legislature is in a special session to consider legislation that will make it more difficult for people arrested to post cash bail and restrictive voting measures that would ban drive-through voting and 24-hour voting.

"Voting restrictions and the expansion of the cash bail system go hand in hand," Robin Steinberg, the founder and CEO of The Bail Project, said in a statement Saturday.

She called Rogers' situation "a textbook example of how these systems intersect to undermine our fundamental rights and target minorities."

Rogers spoke to CNN last year about the long voting lines in Texas. He told CNN at the time that he waited for "a lit bit over six hours" to cast his vote in the Democratic primary, and was not deterred like other voters by the long wait.

"I figured like it was my duty to vote. I wanted to get my vote in to voice my opinion. And I wasn't going to let nothing stop me. So I waited it out," Rogers said.

He had been the last person to cast his ballot at his polling center located at Texas Southern University, a historically Black college in Houston, CNN previously reported.

CORRECTION: This story has been updated with Steinberg's correct pronoun.