Texas man charged with murder after shooting someone in a car outside his home. He told police it was self-defense 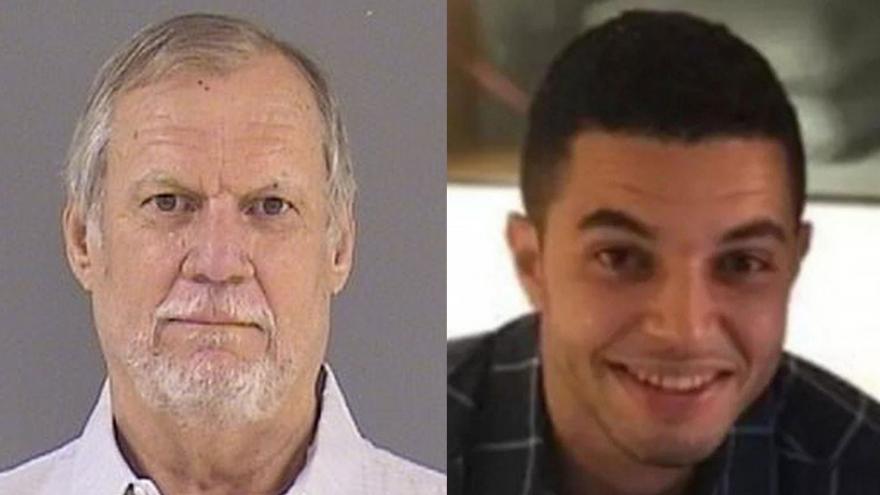 Adil Dghoughi was shot and killed outside of a home in Martindale, Texas, police said.

(CNN) -- A Texas man is facing a first-degree murder charge related to the fatal shooting of a man sitting in a parked car outside his home earlier this month in a case the victim's family believes could test the limits of the state's so-called stand your ground law.

The confrontation began in the early morning hours of October 11 in Martindale, a small town about 35 miles south of Austin.

Terry Duane Turner, 65, told police he woke up to use the bathroom and "discovered an unknown vehicle with its headlights off, to be parked inside of the driveway next to his pickup truck," according to an arrest affidavit obtained by CNN.

Turner said he returned to his bedroom to get his handgun and ran outside to find the headlights of the vehicle turned on, according to the affidavit. Turner told police that the car rapidly backed out of his driveway, he chased after it, and "struck the front driver's side door window twice with his handgun" and fired the gun, striking the driver, the affidavit said.

The victim was identified as Adil Dghoughi, 31, according to police.

Dghoughi's girlfriend, Sarah Todd, told CNN the couple was visiting her cousin in San Antonio prior to the shooting and Dghoughi left to drive back to her home in Maxwell. Todd believes Dghoughi got lost in Martindale and pulled over to look up directions when he was killed.

According to court documents, Turner told a 911 operator after the shooting that "I just killed a guy," adding that Dghoughi "started racing away and I ran after him. He pointed a gun at me, and I shot."

Investigators didn't find a gun in Dghoughi's possession, according to the affidavit.

Turner turned himself in Friday morning on the felony murder charge, according to Caldwell County's Criminal District Attorney Fred Weber. Turner was booked shortly before 10 a.m. and bonded out less than two hours later, according to online records from Caldwell County.

'This is only the beginning'

Dghoughi's family expressed frustration that it took nearly two weeks for Turner to be arrested and feared he would avoid charges by leaning on a Texas law commonly referred to as "stand your ground," which says a person can use force as a means of self-defense if they "reasonably believe the force is immediately necessary" to protect them against another's use or attempted use of force.

Turner's attorney, Larry Bloomquist, told CNN his client is cooperating with police and that he "was defending himself and his property" when he killed Dghoughi.

When asked how Dghoughi, who was sitting in a car, could pose a threat to Turner, Bloomquist said, "I'm not going to discuss specific facts of the case at this time."

Mehdi Cherkaoui, an attorney representing the Dghoughi family, told CNN he could think of "1,001 things" Turner could have done differently to avoid the fatal shooting.

Cherkaoui said circumstances of the case make it look "pretty clear" that a claim of self-defense doesn't apply in this case.

"I pray that when a grand jury hears this case, they will agree," he said.

Dghoughi was a Moroccan national who obtained a master's degree in financial analysis from Rhode Island's Johnson & Wales University, according to the Council on American-Islamic Relations in Austin, which has been advocating on Dghoughi's behalf since his death.

The group staged a vigil outside the Texas State Capitol in Austin Saturday, hoping to "offer some solace to family members and friends" and bring attention to his story.

Dghoughi's family and friends said they welcome the news of Turner's arrest but are frustrated by how long it took for charges to be brought.

The Caldwell County Sheriff's Office defended its work in a statement Friday, saying, "Detectives have worked tirelessly on this case since the incident occurred on October 11th, 2021. Detectives have conducted multiple interviews and executed multiple search warrants in the course of this investigation."

Othmane Dghoughi, Adil Dghoughi's brother, told CNN he's "happy" about the arrest but not "100%" relieved. "We still need to see the evidence that will be presented to the Grand Jury," he said.

Todd, Dghoughi's girlfriend, echoed Othmane Dghoughi's sentiment, saying she's "glad" Turner has finally been arrested, but knows "this is only the beginning."

"We're going to continue to fight until there is justice for Adil," Todd said.