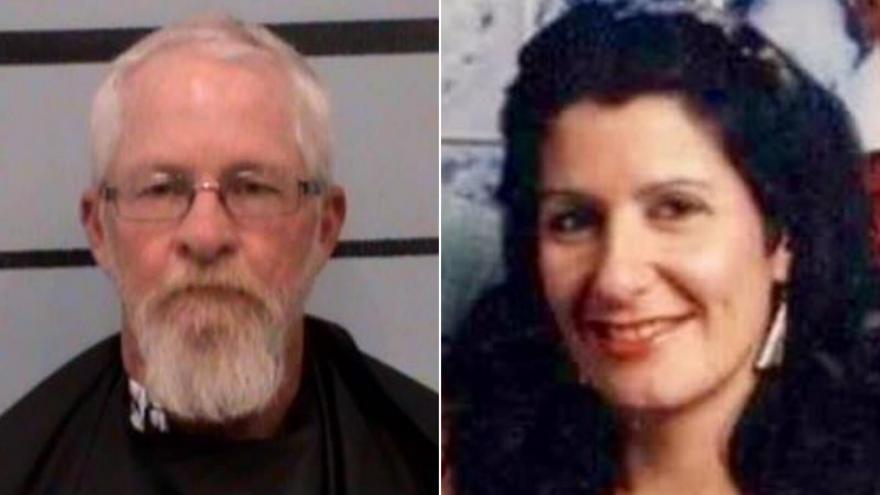 Jimmy Wolfenbarger (left) has been indicted for the murder of Holly Simmons (right) in 2006.

(CNN) -- The former landlord of a woman missing since 2006 in Texas surrendered to authorities Wednesday after being indicted for her murder, according to the Llano County Sheriff's Office.

Jimmy Wolfenbarger, 57, of Lubbock was indicted on May 3 on one count of murder in the death of Holly Simmons, according to the Texas Department of Public Safety (DPS).

Simmons was 46 when she was reported missing by her 17-year-old daughter in 2006. She was last seen alive when she dropped off her daughter at the school bus stop the previous morning, authorities said in a statement.

Following Simmons' disappearance, her house was examined for evidence and neighbors, coworkers and associates were interviewed by investigators. The Llano County Sheriff's Office and the Texas Rangers worked this case for years but she was not found, the statement added.

Finally, in 2009, a recreational diver found a submerged aluminum boat at the bottom of a lake near Simmons' home, the statement says. Her body was discovered at the bottom of the boat with concrete bags placed over her. The Texas Department of Public Safety Dive Team and the Llano County Sheriff's Office jointly recovered the boat and Simmons' remains, according to the statement.

The Travis County Medical Examiner's Office identified Simmons from dental records and ruled the death a homicide, according to the Llano County Sheriff's Office release.

In 2016, the Texas Rangers Unsolved Crimes Investigation Program began reviewing the case and named Wolfenbarger as a suspect following a five-year investigation, according to the DPS.

At the time of the alleged murder, Wolfenbarger was Simmons' landlord and lived near her home in an RV park.