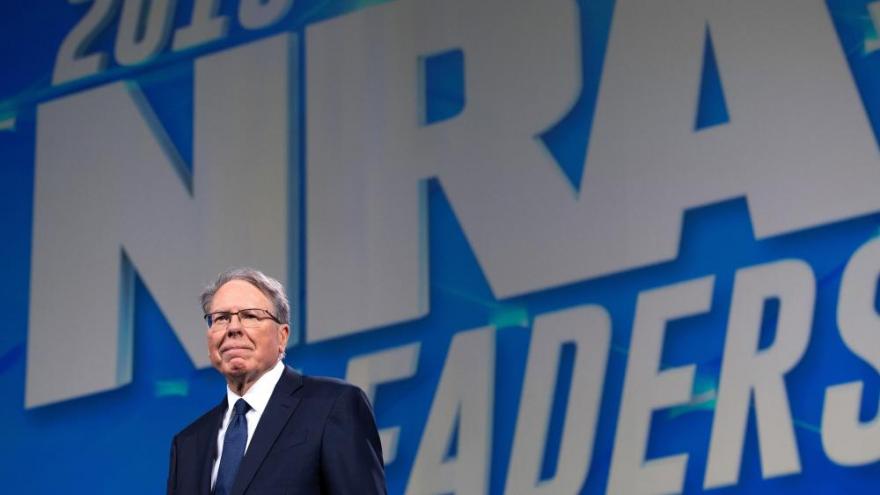 (CNN) -- For nearly a month, attorneys have argued over whether the National Rifle Association's petition to file for bankruptcy in Texas should be dismissed, and whether its business dealings should be overseen by a court-appointed trustee or an examiner.

The virtual trial in a North Texas bankruptcy court included testimony from top current and former NRA officials, including Chief Executive Officer Wayne LaPierre, who testified on April 7 that he had kept news of the impending bankruptcy filing from the NRA's own general counsel, chief financial officer and other salaried NRA officials.

New York Attorney General Letitia James' office asked US Bankruptcy Judge Harlin Hale to dismiss the bankruptcy petition, saying it had been filed as a way to "remove the NRA from regulatory oversight."

Texas attorney Gerrit Pronske, who is representing James' office in court, argued during closing arguments on Monday that the bankruptcy filing should be dismissed for being filed in "bad faith," pointing to a public letter to NRA members on the day the organization filed for bankruptcy in which LaPierre wrote: "The NRA is not 'bankrupt' or 'going out of business.' "

"We are as financially strong as we have been in years," the letter signed by LaPierre read.

Gregory Garman, an attorney for the NRA, argued Monday that the organization has $40 million in "unfunded future litigation." But Pronske countered that financial statements showed the NRA has "plenty of cash on hand."

"I would submit, as a part of a good faith filing, you have to have some problems with your financial condition and you have to have debt issues either now or in the foreseeable future," Pronske said. "The NRA does not have a debt problem ... it has a regulatory problem."

James' office has asked Hale to dismiss the bankruptcy case with prejudice, so that the NRA cannot refile for bankruptcy in another venue.

The NRA's headquarters is in Fairfax ,Virginia, but it's been incorporated in the state of New York since shortly after the Civil War -- for 150 years.

In January, the NRA filed for bankruptcy and as part of its petition sought to be reincorporated in Texas, a move that came five months after James' office filed a suit seeking to dissolve the organization.

James' office alleged the organization violated New York laws governing nonprofits by routinely going around the organization's internal controls to take part in spending that was "inappropriate and wasteful use of charitable assets."

The suit alleges NRA leadership used millions from the group's reserves to fund lavish trips on private jets, meals and other personal expenses and that money was diverted to benefit NRA insiders and favored vendors, that LaPierre handpicked associates to "facilitate his misuse of charitable assets" and that the NRA board did not follow an appropriate process to determine "reasonable" compensation for NRA executives, including LaPierre.

LaPierre testified during the 12-day-long bankruptcy trial that he currently makes $1.3 million, after taking a 20% pay reduction "voluntarily" when the organization had to make cuts to other employees' salaries last year.

"I think my compensation has always been reasonable," LaPierre testified on Thursday.

He also testified that he believes the NRA "is in a much better place today."

"I think it's stronger. I think the controls are stronger," LaPierre testified. "I think the possibility of any overrides of controls are not gonna happen. The protections are in place. I feel very good about where we are."

James' office argued that if Hale does not dismiss the NRA's bankruptcy petition, he should appoint a trustee to monitor the financial operations of the organization, saying that "there is evidence of fraud, dishonesty, incompetence and mismanagement" by current leadership.

Garman denied on Monday that the NRA's bankruptcy filing was a strategy to avoid the New York attorney general's litigation and pointed to a letter from New York Gov. Andrew Cuomo directing his administration to urge companies to "weigh reputational risks" for business ties with the NRA in 2018.

"This is the beginning of our exodus from New York," Garman said Monday. "Because public policy permits us to be in a place where we can exercise our Constitutional rights."

If the NRA's bankruptcy petition is approved it would set a "dangerous" precedent by not allowing the New York attorney general's case against the organization to go forward, said Brian Mason, an attorney arguing on behalf of the NRA's largest creditor, advertising firm Ackerman McQueen.

"If this case is not dismissed, your honor, it's going to throw a monkey wrench into the gears of federalism. It will throw gasoline on the ideological fires that are already raging out of control in this country," Mason said.

Pronske, who has practiced bankruptcy law for 38 years, called the NRA's filing the "worst abuse" of bankruptcy law he's ever seen, and said that if the case is not dismissed it would be a court precedent "instruction booklet" on how to file Chapter 11 "with complete impunity and with complete success."

"If this case is not dismissed, your honor, you would be telegraphing that if you don't like what's going on in your state court lawsuit, come on down to Dallas," Pronske argued.

CORRECTION: An earlier version of this story contained a transcription error in a quote from attorney Gregory Garman.