Texas is sending migrants to New York and Washington, DC, by bus. Many are glad to go 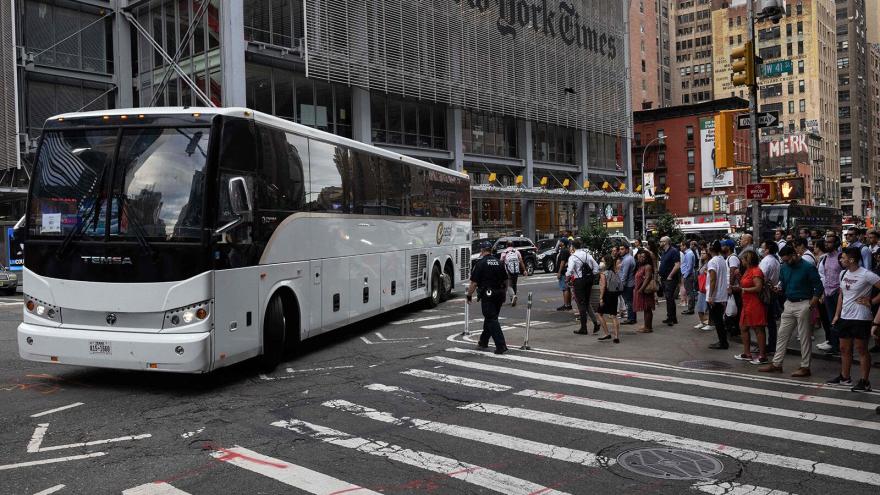 (CNN) -- Genesis Figueroa and her husband spent more than a month traveling from Venezuela to the US border, an exhausting journey interrupted only briefly when she was hospitalized with pneumonia in Guatemala.

Less than a week since finding shelter in Eagle Pass, Texas, after crossing the Rio Grande, they embarked on another trip Thursday morning: this time to Washington DC, on a bus.

They're among the thousands of migrants sent by bus from the Lone Star state to DC and New York this year at the direction of Texas Gov. Greg Abbott, in an effort to highlight his criticism of the Biden administration's immigration policies.

"Before we began busing migrants to New York, it was just Texas and Arizona that bore the brunt of all the chaos and problems that come with it," the governor said in a statement this week. "Now, the rest of America can understand exactly what is going on."

Abbott said Friday the state had sent more than 7,000 migrants by bus to Washington since April and more than 900 migrants to New York City since August 5.

Many, like Figueroa, are happy to leave Texas. The buses stop at several cities along the way to the Northeast, allowing migrants to disembark to reunite with friends and family in other locations. In Washington DC, Figueroa and her husband will meet with their friends.

But officials in New York have pointed to the conditions of the trip, saying migrants arriving in those buses are hungry, thirsty and "often sick."

"We've been on the road for so long, we don't mind two or three more days," Figueroa, 28, told CNN in Spanish.

Neither do Cousins Luis Pulido and Aynner Garrido, who spent six weeks traveling from Venezuela to Texas. Pulido's younger brother did not make it to the US with them. He disappeared when the group was swimming across the Rio Grande. Shelter officials in Texas told Pulido they found his brother's body; he had drowned.

But the cousins have made it this far and are determined to continue with their plans. They will board the bus to DC and will get off before their destination, in Kentucky, where their relatives will be waiting to pick them up.

"They want to go on the buses," said Valeria Wheeler, the executive director of Mission: Border Hope, a non-profit organization which serves the border community in Eagle Pass. "No one has been forced."

The cities on the receiving end have struggled to accommodate the surge in migrants and their needs. New York City officials said last week intake centers were already overwhelmed, and although they planned to open more emergency housing this month, they faced problems stemming from a lack of coordination from the state of Texas.

"They've essentially weaponized this situation," Manuel Castro, commissioner of the mayor's immigrant affairs office, said in a recent city council hearing. "We've learned that the bus company that they've been working with has a nondisclosure agreement that does not allow them to communicate with the city of New York." Abbott's office did not answer CNN's prior questions concerning nondisclosure agreements for bus companies.

New York City Mayor Eric Adams has also accused Abbott of forcing migrants onto the buses, which the governor has denied.

Last week, DC Mayor Muriel Bowser renewed a request for the National Guard to assist with the ongoing arrival of migrants, after a prior request was declined. Her office has said the city has reached a "tipping point."

The mayor's office had also requested to convert a "suitable federal location" in the area into a processing center for the migrants, saying a regional welcome center in Maryland was at capacity, CNN previously reported.

Back in Eagle Pass, more than 40 people, including men, women and children, boarded the bus headed for DC Thursday morning along with cousins Pulido and Garrido, and Figueroa and her husband.

When she gets there, Figueroa told CNN she hopes to be able to find work cooking, cleaning or in an office, to be able to support her family back home.