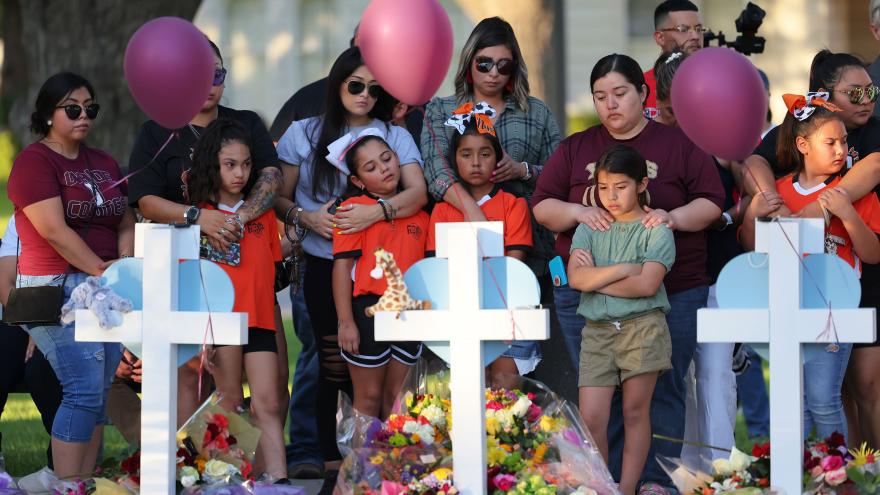 A Texas House Investigative Committee began its search for answers in the Robb Elementary School shooting on June 9 and could produce a preliminary report on its fact-finding mission by the end of the month.

(CNN) -- A Texas House Investigative Committee began its search for answers in the Robb Elementary School shooting on Thursday and could produce a preliminary report on its fact-finding mission by the end of the month.

"The people of Uvalde and the entire State of Texas deserve facts and answers as to what happened leading up to, during, and in the aftermath of this tragedy, and this committee will do everything in its power to get to the bottom of the matter," Republican state Rep. Dustin Burrows, the committee chairman, said in the panel's opening remarks.

Burrows added that the committee "may produce a preliminary report in order to accommodate the need to have some information out to the public before a full and thorough investigation has taken place."

A source close to the committee said the preliminary report is expected to be complete by the end of June. The report is expected to focus on the facts only and include a chronological sequence of events, a timeline, and details on the shooter, according to this source. The committee is quasi-judicial and has subpoena power, and all witness testimony will be under oath, the source said.

After its opening remarks, the committee ended the public portion of the hearing and moved to a private executive session.

Moody declined to speak about specifics, but said, "Like every other parent in this state, I'm sad. I'm scared. I'm shocked."

The hearing comes two weeks after gunman Salvador Ramos used an AR-15-style rifle to kill 19 children and two teachers inside adjoining classrooms at Robb Elementary. The gunman was in the classrooms for more than an hour even as law enforcement stood in the hallway outside and as children inside called 911 and urgently pleaded for help, officials said.

The 18-year-old gunman was ultimately shot and killed by a Border Patrol tactical response team, according to a timeline provided by DPS.

The lengthy delay appeared to violate commonly accepted protocol in active shooter situations, in which police are instructed to stop the gunman as soon as possible.

Authorities have offered contradictory explanations of how the gunman was able to enter the school, what police did in response and why he was able to remain inside for so long. They have not held a press conference to answer these key questions in over a week, frustrating local residents and officials alike.

"I've asked everybody involved for a briefing at one point or another," Uvalde Mayor Don McLaughlin said Tuesday. "It's frustrating, but again I've been told I'm not law enforcement, but it makes me feel real frustrated."

At McLaughlin's request, the US Department of Justice assembled a team to lead a federal review of the response to the shooting. The team will be supported by experts including retired police chiefs and an FBI official. US Attorney General Merrick Garland said Wednesday the DOJ investigation "is not a criminal review."

Also on Thursday, Uvalde Consolidated Independent School District (UCISD) superintendent Hal Harrell took some questions at a news conference but declined to speak on the investigation or on the employment status of Pedro "Pete" Arredondo, the school police chief who oversaw the flawed response to the shooting.

"That's a personnel question and I'm not going to be able to answer that in a public forum," he said.

Harrell said that security walks are being conducted on all campuses and the school district plans to hire additional law enforcement officers for the upcoming school year.

He reiterated that students will not be returning to Robb Elementary's campus again and will instead be moved to different local schools.

"We will not be going to that campus in any form or fashion. There will be no school personnel on that campus as we move forward," he said.

Cousin of Maite Rodriguez speaks about the 10-year-old

The cousin of Maite Rodriguez, one of the children killed in Uvalde, spoke to CNN on Thursday about her beloved family member known for her green Converse shoes.

"Maite was just naturally the way she was," said Destiny Esquivel. "She was smart, she was ambitious, she was a lot of things I had to learn to be. A lot of people have to work on certain things as a person, but I can honestly say Maite -- that's just how she was, and that was the best part of her. If she wanted it she was going to get it, no matter how hard it was, she was going to put in the work."

Her green Converse shoes, with a heart drawn on one, were highlighted at the White House briefing room on Tuesday by actor Matthew McConaughey and his wife Camila Alves, who spent time with the victims' families over the past week. The couple brought a pair of shoes like the ones she favored that McConaughey said were used to identify Maite's body after the shooting.

Destiny called on lawmakers to make changes to better protect children like Maite.

"They deserve more than just condolences or anything else. We all know that isn't going to bring them back, but we can prevent it from happening to other Americans and other schools in the United States," she said.

"I know that she's looking down and she doesn't want this to happen to anyone else," she added. "I don't want any more mothers to bury their kids because it shouldn't be like that. It shouldn't."