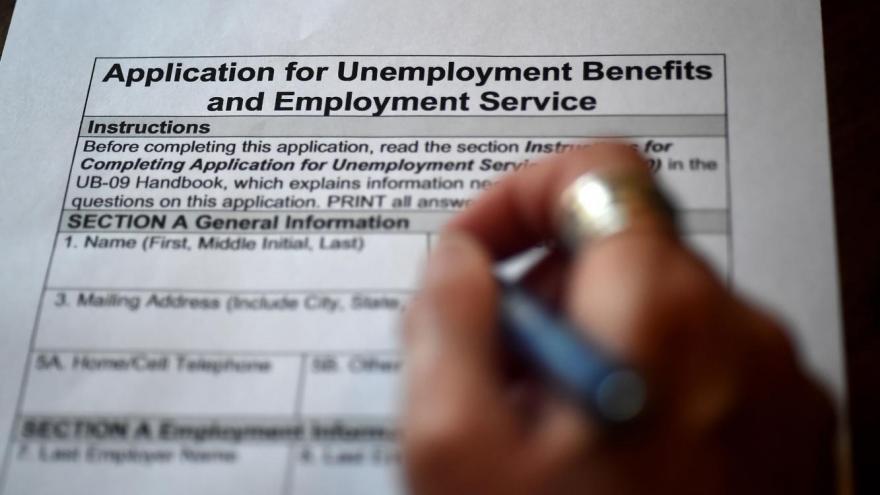 (CNN) -- Texas, Indiana and Oklahoma will end early the $300 weekly federal boost to state unemployment payments, as well as two other pandemic jobless benefits programs, according to the states' Republican governors -- joining 17 other GOP-led states in dropping the federal expanded benefits over the past two weeks.

The three states' announcements on Monday mean that a total of nearly 3.7 million laid-off Americans will lose jobless payments in June or July instead of early September, according to an analysis by The Century Foundation. These workers will forgo a total of nearly $22 billion in benefits.

Republican governors have cited workforce shortages and the improving economy as the reasons behind their decisions. They argue that the generous benefits -- which Congress first approved in its massive coronavirus relief plan in March 2020 and extended twice since -- are keeping Americans from returning to the labor market.

In addition to providing the $300 supplement, lawmakers expanded benefits to freelancers, the self-employed, independent contractors and certain people affected by the pandemic and extended the duration of payments for those in the regular state unemployment program.

Texas Gov. Greg Abbott sent a letter on Monday to the Department of Labor announcing that the state would withdraw from the federal programs on June 26. This would affect more than 1.3 million jobless residents, according to The Century Foundation.

"The Texas economy is booming and employers are hiring in communities throughout the state," Abbott said in a statement. "According to the Texas Workforce Commission, the number of job openings in Texas is almost identical to the number of Texans who are receiving unemployment benefits."

"There are nearly 60% more jobs open (and listed) in Texas today than there was in February 2020, the month before the Pandemic hit Texas," he asserted, without counting the many jobs in industries typically not listed such construction and restaurant service.

Abbott's office also alleged high levels of unemployment fraud among the filed claims, asserting that "TWC estimates that nearly 18% of all claims for unemployment benefits during the pandemic are confirmed or suspected to be fraudulent, which totals more than 800,000 claims, worth as much as $10.4 billion, if all claims had been paid."

Indiana Gov. Eric Holcomb announced that the Hoosier State will end its participation in the pandemic unemployment programs on June 19, according to a release from the governor's office.

"There are help wanted signs posted all over Indiana, and while our economy took a hit last year, it is roaring like an Indy 500 race car engine now," Holcomb said. "I am hearing from multiple sector employers that they want and need to hire more Hoosiers to grow."

Noting that Indiana's unemployment rate, which jumped to more than 17% at the height of the pandemic, has recovered to 3.9%, Holcomb added that "eliminating these pandemic programs will not be a silver bullet for employers to find employees, but we currently have about 116,000 available jobs in the state that need filled now."

In Oklahoma, pandemic payments will end on June 26, Gov. Kevin Stitt said Monday. But the first 20,000 residents collecting unemployment benefits who return to work will receive a $1,200 bonus. They must complete six consecutive weeks of employment of at least 32 hours a week with the same employer to qualify.

Montana and Arizona, which announced earlier this month that they would terminate benefits early, are also offering return-to-work bonuses.

Experts, however, argue that these funds don't only help the jobless but also assist local businesses and economies because those out of work are able to continue spending on groceries, housing costs and other items. And many out-of-work Americans can't return to the workforce because of child care issues or health concerns.

Democrats, meanwhile, decried the moves by the GOP governors.

"Many are losing everything, and their incomes will be zero," Sen. Ron Wyden of Oregon said of those in the programs that expand benefits to more Americans and lengthen the duration of state benefits.

Those collecting regular state benefits, which typically last 26 weeks, will continue to receive payments but will not get the $300 supplement.

Connecticut Gov. Ned Lamont, a Democrat, announced Monday that the state will provide a $1,000 return-to-work bonus to 10,000 long-term unemployed residents who land full-time jobs and work for at least eight weeks.

However, Connecticut is not terminating pandemic unemployment benefits -- though, like in other states, it will use federal funds to pay the bonuses.

"This is the latest tool in our toolbox to maximize our state's recovery from the coronavirus pandemic," Lamont said.