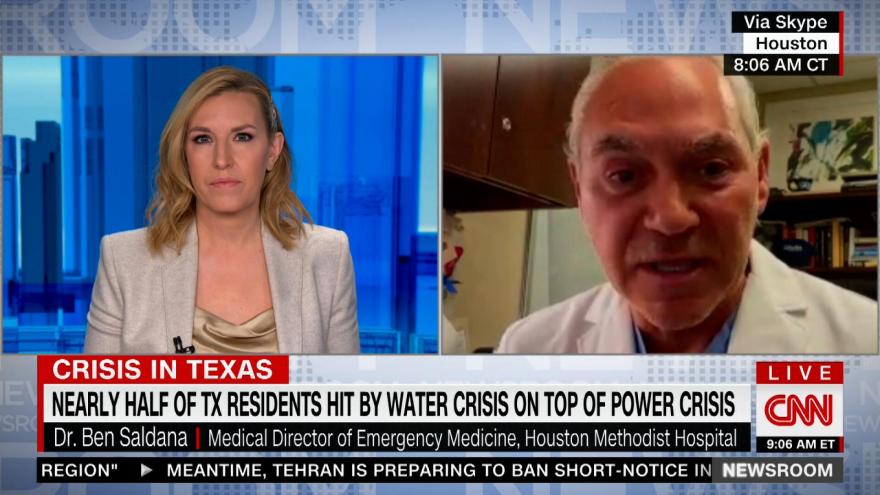 From bursting pipes to delays for dialysis patients whose treatment can wait, a pair of Houston community hospitals Friday struggled with water and power woes stemming from freezing temperatures and winter storms.

(CNN) -- Hospitals in Texas are grappling with a series of issues, from burst water pipes to supply chain disruptions, due to severe winter weather across the state, the Texas Hospital Association said Friday.

Many hospitals don't have running water or have burst pipes, low pressure and boil water notices, according to a statement from Carrie Williams, a spokeswoman for the association.

Hospitals also have staffing issues, as some employees have had to stay on site to care for patients, putting a strain on the hospitals' supply of food, linens and water.

Other supplies and medication stocks are running low, although there are some supply trucks moving today, Williams said.

"Hospitals are ready for anything. But this was a sprawling natural disaster that hit us statewide and arrived on top of the pandemic," Williams said.

Many of these issues are faced by a pair of Houston community hospitals, who have been struggling with water and power woes stemming from the freezing temperatures and winter storms.

"You've seen this year that all across the country, people have stepped up and made things happen," Dr. Ben Saldana, the medical director for Houston Methodist's emergency departments, said of the latest crisis confronted by health care providers.

"We are the safety net for our public in the emergency department, our hospitals and doctors or nurses getting together to make sure patients have a safe place and are cared for," he said.

Houston Methodist West and Houston Methodist Baytown hospitals were operating without water until Thursday. Water was back on Friday but there were still issues with low pressure, according to Saldana and a hospital spokeswoman.

"As more of our area hospitals were without power and water, many of their patients ended up at our facilities," Saldana told CNN Friday.

That has meant "kind of bifurcating the ER into an area where Covid is unlikely and an area where it could be possible," he said. "As the volume of dialysis patients increased, this became very difficult. Five out of six patients that need dialysis three times a week had no place to go this week. And we are still struggling with that ... It's become a very difficult proposition for those patients."

Crisis mode for the past year

The pandemic had forced the Houston hospitals -- like many around the country -- to operate in crisis mode most of the past year.

"We're functioning like we have all year -- by being agile and getting our leadership together and, within an hour, standing up spaces that are not normally housing patients to keep them warm and evaluate whether there's critical illness or not," Saldana said.

The number of dialysis patients has been a concern.

"Every hour we go into the waiting room and ask, 'Who is here for dialysis?'" Saldana said. "Most of them raise their hands and we explain, 'This is what we're going to do. We're going to evaluate your blood work, EKG, chest x-ray and decide, like we do with all diseases, some risk stratification ... Is this a life-threatening disorder at this moment or is this something we can treat and get you dialysis in the next day?'

"So, we've set up kind of an outpatient dialysis center in our hospitals to make sure that patients are getting some portion of their treatment so they can get through the day and possibly to the next."

Covid-19 vaccinations have been delayed across many hospitals and public health partners due to the weather and shipping delays.

Patients who were discharged have stayed in hospital lobbies because they either don't have transportation to return home or can't return home due to power outages, according to Williams.

There is also a delay in trash pickup due to vendor issues, Williams said.

Leaks caused by frozen pipes pushed the state's water supply to the brink. About 13 million Texans, nearly half the state's population, remained under a boil-water advisory Thursday. More than 700 water supply systems are affected.

More than 25 million people were under a hard freeze warning through Friday morning for parts of Texas, Oklahoma, Arkansas, Louisiana and Mississippi.

"All our hospitals are doing some elective procedures, but we are on our way to being fully operational," she added. "Covid vaccine administration is full speed ahead at all Houston Methodist sites."

On Thursday, the hospitals were trucking water for consumption and collecting rainwater for toilets, Smith said.

Saldana suggested that government leaders could learn from the way the medical community and others have dealt with adversity during the pandemic.

"Our state leadership should take our example and run with it," he said. "It's time to kind of make sure this doesn't happen again."