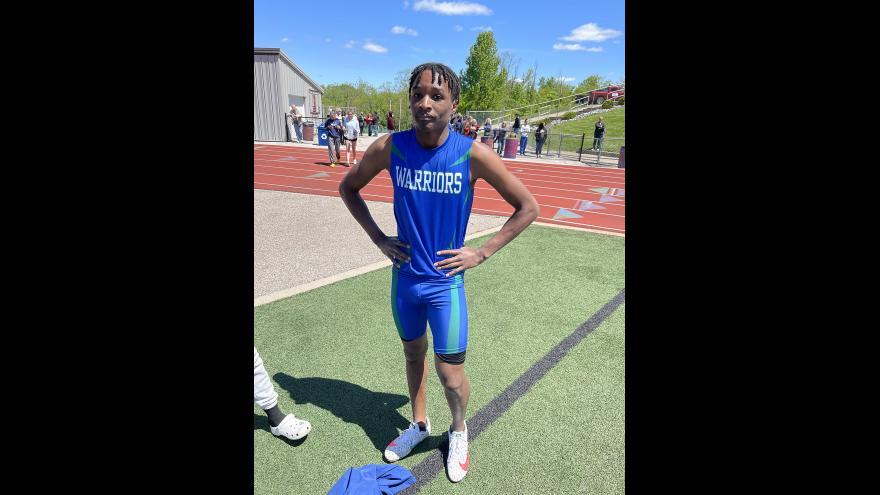 Dyree Williams is pictured in 2021 at his previous school's track competition in Ohio.

(CNN) -- Nothing makes Dyree Williams feel more like himself than his hair, which he has proudly worn in twists, braids and locks all his life -- it's part of his identity and a direct connection to his ancestors.

But Williams' locks became an issue after the 17-year-old moved from Cincinnati, Ohio, to East Bernard, 50 miles outside of Houston, Texas, in February. His new school's dress code policy stated that "braided hair or corn rows will not be allowed," a policy that went against his very sense of self.

Bullock told CNN that having Williams change hairstyles to comply with the policy is not an option for either of them.

CNN obtained a copy of the handbook, which has been removed from the district's website. The handbook goes on to state that, "This includes but not limited to tall hair styles, side swept bang styles, and long hair dangling over shaved sides or shaved back of the head. This also includes mullets and mullets in the making. Braided hair or corn rows will not be allowed. No extremes in hair styles."

CNN has made several attempts to reach East Bernard High School and East Bernard Independent School District for comment but has not heard back.

Bullock hoped that after meeting Williams in person, the school would allow some dispensation from the policy, but the school's administration just referred them back to the student handbook for the dress code policy.

She then filed for a religious exemption on behalf of her son with the district's superintendent, but it was denied.

"The exemption request you filed has not been granted at this time," Courtney Hudgins, East Bernard Independent School District's Superintendent said in an email response to Bullock. "Assuming the children can meet the dress code requirements, as well as all necessary paperwork for enrollment, they are welcome to enroll with our district registrar. Please contact the registrar to make an appointment for enrollment. If you have any specific questions regarding the dress code, please contact the campus principal."

Bullock replied asking for clarification on how the district came to its decision, but has not heard back.

"East Bernard ISD's hair policy is deeply discriminatory and needs to be changed," Brian Klosterboer, attorney for ACLU of Texas told CNN in a statement. "The policy contains explicit gender discrimination that recent court decisions have found to be unconstitutional and violate Title IX, and it also explicitly bans 'braided hair or twisted rows/strands,' which is a proxy for race discrimination and disproportionately harms Black students in the district."

In Texas, students generally must attend the school district where they have residency. Transferring to another district isn't a sustainable option right now, Bullock said, and in the meantime, she is homeschooling Williams and his two sisters.

Only 6.1% of the students in the district are Black, according to the Texas Education Agency.

Williams would be entering his junior year of high school, a pivotal year for many high school students in the wake of college prep, Bullock said, and feels bad because he's missing opportunities to run track and get noticed by scouts for college scholarships.

Hair discrimination in schools stretches across the country

Last month, the US House of Representatives passed the CROWN Act, which stands for "Creating a Respectful and Open World for Natural Hair" and seeks to protect against bias based on hair texture and protective styles, including locks, cornrows, twists, braids, Bantu knots, and Afros.

The bill now heads to the Senate, where Democratic Sen. Cory Booker of New Jersey is sponsoring the chamber's version of the bill.

The CROWN Act is already law in more than a dozen states, according to the Pew Research Center, after California first passed it in 2019. Massachusetts recently advanced its version of the CROWN Act in the state House and now heads to the state Senate.

However, many states have not passed formal legislation, making Williams' experience a common one, with more and more Black students saying they've been penalized for their hair.

Bradford's cousin, DeAndre Arnold, was also given in-school suspension for having his hair in long locks and was told he couldn't walk in his graduation ceremony unless he cut his hair.