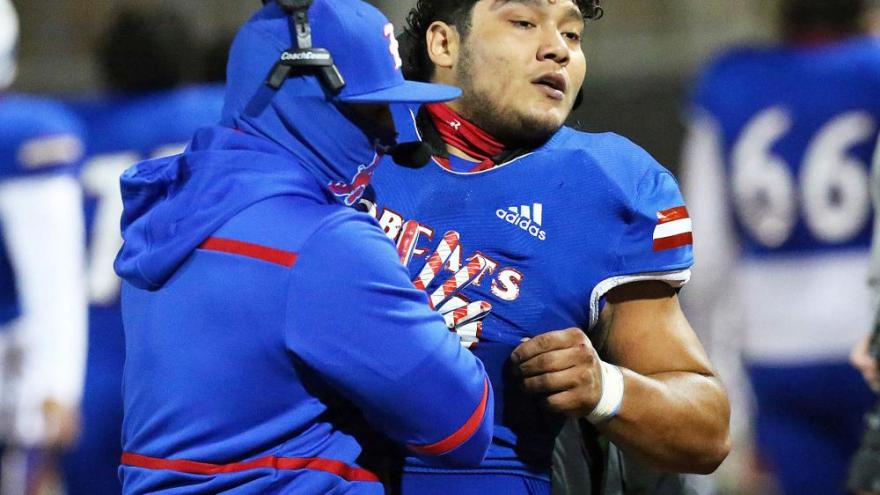 Edinburg High's Emmanuel Duron is pulled from the field by coaching staff during a football game on Dec. 3, in Edinburg, TX.

(CNN) -- A South Texas high school football player was charged with assault after rushing from the sideline and knocking a referee to the ground during a game, according to Hildalgo County jail records.

Emmanuel Duron, 18, was charged by the Edinburg Consolidated Independent School District police with assault causing bodily injury, the jail records show. He was being held on a $10,000 cash or surety bond.

It's unclear if Duron has an attorney. CNN has reached out to his parents for comment but has not heard back.

The school district says that it has removed the Edinburg High School football team from the playoffs after the alleged assault. Interim Superintendent Gilbert Garza Jr. decided to remove the team after consulting with senior officials with the University Interscholastic League (UIL) and legal counsel for the district, the school system said in a Friday news release. UIL oversees extracurricular academic, athletic, and music contests for most Texas schools.

"The UIL strongly condemns the unsportsmanlike behavior displayed in the Edinburg vs. PSJA high school football game on December 3, 2020. Physical contact with a sports official is never appropriate," a UIL statement included in the release said.

In video of the game, the 5 foot, 11-inch, 225-pound Edinburg player is seen being held back by teammates after a referee announced two penalties against him -- including one for unsportsmanlike conduct that led to the ejection.

The player rushes to midfield from the sideline and delivers a hard, blindsided tackle that knocked the referee to the ground.

The player is later seen being escorted off the field by law enforcement. The referee was assisted by staff from both teams, according to livestream video from the Edinburg Consolidated Independent School District.

The referee could be seen walking off the field under his own power. There was no update on his condition.

The Texas Association of Sports Officials called the incident "another vicious and deliberate assault" on one of their officials and said in a statement that it was investigating.

"We extend a sincere apology to the referee and his family," Edinburg Consolidated Independent School District said in a statement Friday.

"On behalf of the Edinburg CISD Board of Trustees and administration, we apologize to the athletes, staff, and our school community. We will take the appropriate disciplinary action once we understand the facts and circumstances underlining this incident. The district takes these matters very seriously; however, we cannot comment further on a pending investigation."