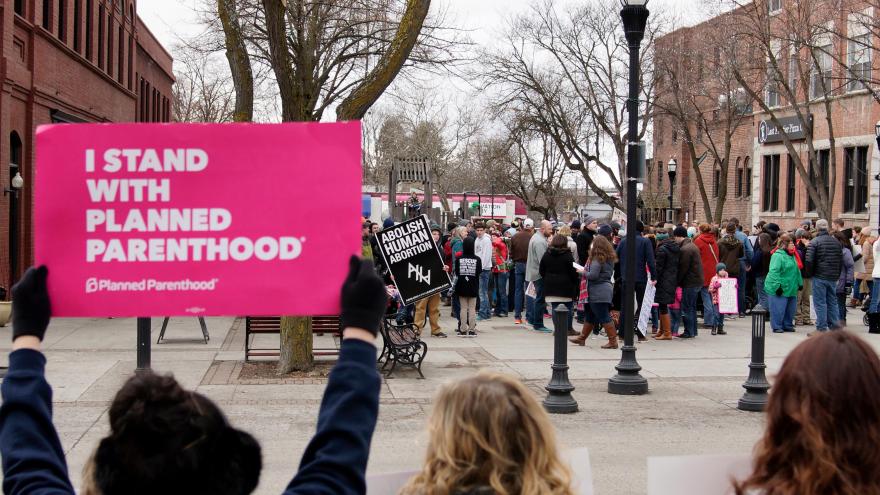 (CNN) -- Texas Gov. Greg Abbott on Wednesday signed into law a so-called "heartbeat ban" abortion bill -- barring most abortions at the onset of a fetal heartbeat, which can occur as early as six weeks into pregnancy and before many people know they are pregnant.

"Our creator endowed us with the right to life and yet millions of children lose their right to life every year because of abortion," Abbott said. "In Texas, we work to save those lives. And that's exactly what the Texas legislature did this session."

The Texas bill, SB 8, requires that abortion providers check for a fetal heartbeat before performing an abortion, and bans them from carrying out the procedure if one is detected. It makes exceptions "if a physician believes a medical emergency exists," but not for instances of rape or incest, citing that "public and private agencies provide ... emergency contraception for victims of rape or incest."

The measure joins a growing cohort of state abortion bans in 2021, with many Republican-led state legislatures advancing restrictions on the procedure at a renewed pace that could eclipse the similar wave seen in 2019. The bills run starkly counter to -- and largely seek to overturn -- Roe v. Wade, the 1973 landmark Supreme Court decision legalizing abortion nationwide prior to viability, which typically occurs at around 24 weeks of pregnancy.

Abbott's signature also comes on the heels of the Supreme Court on Monday agreeing to take up a key abortion case next term concerning a controversial Mississippi law that banned most abortions after 15 weeks, rekindling a potentially major challenge to Roe in front of the majority conservative court. The court's announcement is only expected to intensify the growing trend of state-level abortion restrictions coming out of Republican-controlled legislatures, according to activists on both sides of the issue.

Texas joins South Carolina, Oklahoma and Idaho in codifying bans this year on abortion at the onset of a fetal heartbeat. Also this year, Arkansas and Oklahoma have enacted near-total abortion bans, and Montana banned the procedure at 20 weeks. None of the bills have gone into effect, either because of court actions or later effective dates. Neither have any of the 10 gestational bans, which bar abortions past a certain point in pregnancy, that passed in 2019 and 2020.

Abortion rights supporters slammed the bill, with Diana Gómez, advocacy manager at Progress Texas, asserting that "this abortion ban contains some of the most extreme abortion restrictions in the country."

"Let me be clear: Abortion is health care and it is still legal in Texas," she said in a statement. "This six-week abortion ban is unconstitutional and others like it have been struck down by federal courts across the nation. Roe v. Wade is still the law of the land and regardless of whatever bill Gov. Abbott signs, no law will stop abortions from happening."

Among the increasingly common heartbeat bans passed this year, however, Texas' bill is unique in that it includes a provision opening anyone who aided in accessing such an abortion to legal liability.

It allows for civil charges to be brought against those who provide abortions after the detection of fetal heartbeats, as well as anyone who "knowingly engages in conduct that aids or abets the performance or inducement of an abortion, including paying for or reimbursing the costs of an abortion through insurance or otherwise," after the onset of a fetal heartbeat. Those found guilty would face a $10,000 fine for each abortion performed or facilitated.

The bill would allow nearly anyone other than a Texas government official to file a lawsuit regarding any abortion allegedly violating the heartbeat ban, with the Texas House adding an amendment that says a perpetrator of rape or incest cannot file a lawsuit against those providing or facilitating their victim's abortion should it violate the heartbeat ban.

The Texas House passed the bill earlier this month. Republican state Rep. Shelby Slawson introduced the bill in the House to applause and whoops, saying it would "protect the lives of our most precious Texans, starting at the moment their heart begins to beat."

Multiple Texas House Democrats decried the measure going into the vote. When Slawson said that people who successfully bring claims against those who provide or facilitate abortions in violation of the heartbeat ban would receive the $10,000 sum dictated by the bill, Democratic state Rep. Nicole Collier said that "it's just like a lottery, basically."

"There will always be women who will pursue having abortions despite what you do here today and what you've been doing for a decade to create all these obstructions," said state Democratic Rep. Donna Howard, a former nurse. "It will always be a case that women will seek abortions, because women are not always in a position to have that baby. And you guys don't have to have them, we do. It affects our lives."

Texas state Sen. Bryan Hughes, the bill's sponsor in the Senate, told CNN before the bill's signing that "it was time for Texas to pass a heartbeat bill. We looked at what other states had done, looked at what the Supreme Court and other federal courts have said about abortion and what states can do, and took all that into account to come up with Senate Bill 8."

Regarding the lack of exceptions for rape and incest victims, Hughes said, "Let's do everything we can to hold people accountable who do something like that, to protect women from that," adding, "Let's harshly punish the rapist, but we don't, we don't punish the unborn child."

Pointing to Texas laws regarding Medicaid fraud and religious freedom that he said similarly allow any person to file suit over alleged violations, Hughes said that the provision in SB8 "is to encourage people to bring these claims. So the Legislature has made it, has determined that illegal abortions should be discouraged, and so enabling private citizens to bring those suits is one way to do that."

That same provision, he believes, could get the bill farther along in an anticipated court challenge, based on signs from higher courts that have considered similar restrictions.

"Based on what we read in court opinions from other abortion cases, and other federal cases, we believe this bill -- because of the private civil enforcement, primarily, and a few other things -- is drafted differently than those other heartbeat bills that are pending, that are awaiting court ruling today," he said.

Leaders of Texas abortion funds -- which help pay for the procedure and related expenses for abortion seekers who cannot afford them -- have decried the bill as putting their organizations, as well as abortion seekers' friends, in legal jeopardy.

"These are expensive. This is our time and our resources," she said of hypothetical challenges against the group, which she noted does not have a legal budget. "If we were to be hit by frivolous lawsuits left and right, I mean, this would really prevent us from doing our work in a lot of ways."