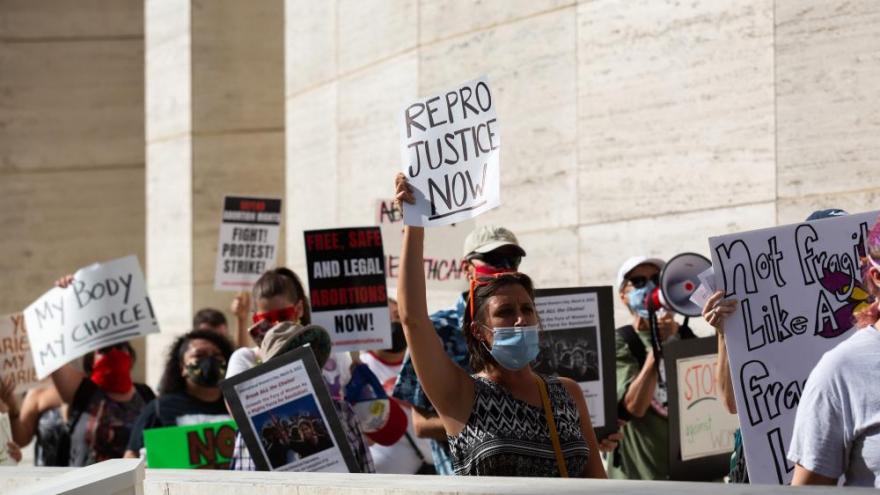 Protestors march from City Hall to the federal court house in protest of the new state abortion ban in Houston, Texas on Sept. 5. Abortion-inducing drugs in Texas will now be harder to obtain after the state's Republican governor recently signed restrictive legislation into law, weeks after another strict abortion law went into effect in the state.

(CNN) -- Abortion-inducing drugs in Texas will now be harder to obtain after the state's Republican governor recently signed restrictive legislation into law, weeks after another strict abortion law went into effect in the state.

Senate Bill 4, signed into law by Gov. Greg Abbott on Friday, prohibits a person "from providing an abortion?inducing drug to a pregnant woman without satisfying the applicable informed consent requirements for abortions." The law requires physicians providing abortion drugs to comply with certain physician reporting requirements. Anyone who "intentionally, knowingly, or recklessly violates" the bill faces a state jail felony offense.

A state jail felony offense is punishable by 180 days to two years to jail and a fine not exceeding $10,000, according to the state's penal code.

The law joins another new controversial abortion law in the state that has infuriated reproductive rights activists, whose efforts to stop it from taking effect were turned down by the Supreme Court earlier this month. That law bans abortions after six weeks and allows any person -- as long as they're not a government official -- to bring a civil lawsuit in state court against a provider accused of violating the ban.

CNN has reached out to Abbott's office for comment on SB 4, which takes effect in December.

NARAL Pro-Choice America acting president Adrienne Kimmell said in a statement on Monday that the new law "blatantly tramples on Texans' fundamental freedoms and pushes access to care further out of reach."

"Anti-choice politicians in Texas are launching their attacks on abortion access from every angle imaginable," she said, adding that they "have made their intentions abundantly clear, and they will stop at nothing to strip away reproductive freedom."

Abbott had already attempted to restrict so-called medication abortions in Texas last year when he signed an executive order that was interpreted to restrict abortion access in the state, citing a need to preserve personal protective equipment during the coronavirus pandemic.

The governor's order sparked a legal battle that eventually led a federal appeals court to say in April 2020 that it would deny a request from Texas to block medication abortions, a procedure where a patient takes two pills, which is often performed early in a pregnancy. Abortion providers had argued that no PPE is used for a medication abortion.

Meanwhile, another legal fight over the state's six-week abortion ban looms after a San Antonio doctor who publicly claimed that he had violated the ban was hit in recent days with at least two lawsuits brought against him under the ban, both brought by plaintiffs who say they oppose the new law.