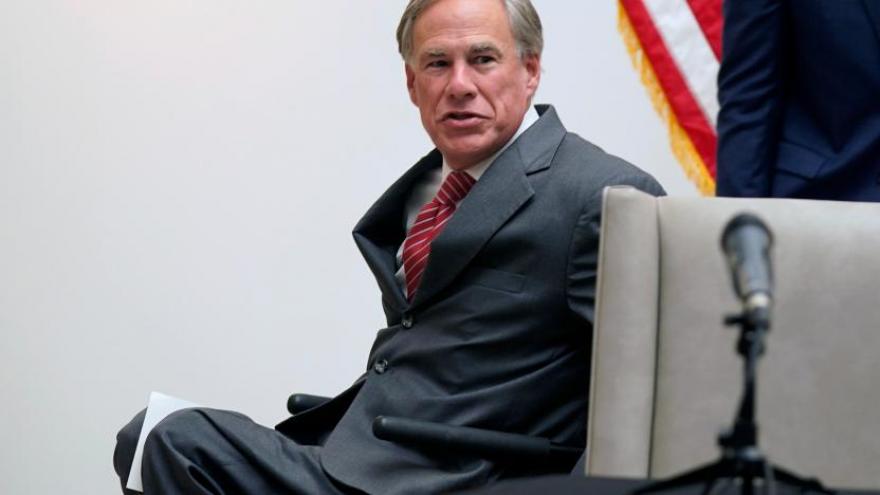 Texas Gov. Greg Abbott, pictured here in Texas, on September 7 says he's directed the Texas Department of Public Safety and the Texas National Guard to shut down six points of entry along the US-Mexico border amid a surge in migrants.

(CNN) -- Texas Gov. Greg Abbott said Thursday he has directed the Texas Department of Public Safety and the Texas National Guard to shut down six points of entry along the US-Mexico border amid a surge in migrants.

The Republican called the crisis dire and said "agents are overwhelmed by the chaos" at the border.

"The sheer negligence of the Biden Administration to do their job and secure the border is appalling. I have directed the Department of Public Safety and the Texas National Guard to surge personnel and vehicles to shut down six points of entry along the southern border to stop these caravans from overrunning our state," Abbott said in a statement.
"The border crisis is so dire that the U.S. Customs and Border Protection is requesting our help as their agents are overwhelmed by the chaos. Unlike President Biden, the State of Texas remains committed to securing our border and protecting Americans."

Department of Homeland Security spokesperson Marsha Espinosa told CNN on Thursday that it "is not seeking assistance from the State of Texas to shut down ports of entry," adding that "it would be a violation of federal law for the Texas National Guard to unilaterally do so."

Earlier in the day, Texas Department of Public Safety Regional Director Victor Escalon said that all the points of entry to Del Rio, Texas, will be shut down due to the overwhelming number of migrants there.

"Six, seven days ago, Del Rio saw 400 migrants sitting, underneath the bridge, the (point of entry) in downtown Del Rio ... there's about 6,000 sitting there right now and more are coming," said Escalon.

"Before I came here today, my last instructions are, we're going to shut down all the POEs in Del Rio," he said, following an update on Operation Lone Star.

CNN previously reported Del Rio Mayor Bruno Lozano said there were over 8,500 migrants under the Del Rio International Bridge waiting to get processed.

According to the US Customs and Border Protection website, the "Del Rio Sector is responsible for detecting and preventing the smuggling and unlawful entry of undocumented immigrants into the United States along 245 miles of the Rio Grande River and Lake Amistad that forms the border between the U.S. and Mexico. The area covers 55,063 square miles of Texas, and reaches 300 miles into Texas from the U.S.-Mexico border."

The crisis at the southern border has been a key focus of the Biden administration, though President Joe Biden has had to contend with losses in court cases over some of the policy changes they have made.

On Thursday, a federal judge blocked the administration from turning away migrant families with children under a public health order related to the coronavirus pandemic, marking a defeat for the administration which has relied on the order amid an influx of arrivals. The order takes effect in 14 days.

And last month, a federal judge in Texas ordered the administration to revive a Trump-era border policy that required migrants to stay in Mexico until their US immigration court date. Biden had ended the program earlier this year.

Meanwhile, border arrests remain at the highest level in decades, reaching one million before the end of the fiscal year and more than 208,000 in August alone. Some of those apprehended at the US-Mexico border are repeat crossers.