Texas governor meets with some Uvalde families. But a Robb Elementary teacher says 'it's all for show' 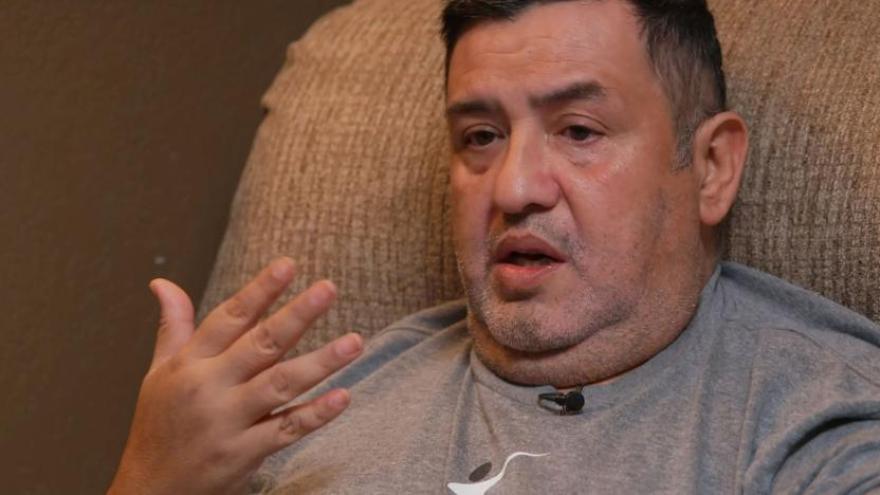 Arnulfo Reyes is a teacher at Robb Elementary who was wounded in the mass shooting in Uvalde, Texas. Texas Gov. Greg Abbott met privately with some families in Uvalde on August 1 to discuss school safety.

Robb Elementary School teacher Arnulfo Reyes expressed his skepticism of the governor's visit to the town, where questions and frustrations remain over the official response to the May 24 massacre that left 19 students and two teachers dead.

Reyes said he and Abbott spoke in person Monday morning after the governor's office reached out to him last week.

"I felt like it was just a political thing, I don't think they cared," Reyes said, when asked how he felt about the governor reaching out. "I think it was just it's all for show. ... If he would have cared, he wouldn't have done the NRA (convention) in Houston after our tragedy."

Abbott canceled an in-person appearance at the NRA convention on May 27 but did release a video message that was played in the arena. He instead attended a news conference in Uvalde.

Reyes said he asked the governor why the state's minimum age to buy a firearm hasn't been raised from 18 to 21. In Texas, people 18 and older may buy long guns and buyers who are at least 21 can purchase a handgun from a licensed dealer. The gunman in Uvalde bought two semi-automatic rifles around the time of his 18th birthday.

"I asked him about the age limit ... why do we still have it at 18? Why couldn't it be moved to 21?" Reyes said. "He said that they had found it unconstitutional to change the age or something like that."

Abbott's office, when asked for comment about Reyes' description of the conversations, said, "Governor Abbott is meeting privately with victims' families. Out of respect to these families who are still grieving, the discussions will remain private."

Abbott has met with more than two dozen families in Uvalde and will continue talking to families, according to a statement from Abbott spokesperson Ranae Eze.

Reyes told CNN that Abbott met Monday with several families, including the mothers of Tess Mata and Eliahna Garcia, who were both killed at the school.

Abbott said he plans to make sure that all schools are safe before the school year begins and claimed Uvalde schools would now be more secure than others, according to Reyes.

At a meeting last week, the Uvalde school board announced it plans to improve school security, including hiring additional officers for the district police force, which had five members on the day of the shooting.

Parents and other community members voiced their frustration at the meeting about what they called a lack of transparency on the part of the board over what will be done to make their children feel safe going back to school.

The school calendar has been pushed back to implement some of the security upgrades, officials have said.

In Hondo, Texas, less than an hour's drive east of Uvalde, a spirited city council meeting was held Monday during which members voted 4-1 to revoke a rental agreement for a Friends of the NRA fundraiser that was set to be held Saturday at a city-owned facility.

The decision was made after several relatives of Robb Elementary shooting victims spoke out during the meeting.

Nikki Cross, a relative of Uziyah Garcia, who was among the students killed, said, "I am not here protesting the NRA or anything like that. I am just here asking your community to take into consideration it's only been two months for us."

Jazmin Cazares, whose sister Jackie died in the Uvalde shooting, addressed council members, naming each victim of the massacre.

"It is a slap in the face to all of Uvalde, especially the ones that lost a loved one, some of us being here today. What's an even harder slap in the face is the AR-15 you get if you donate $5,000 to the NRA," she said.

The Hondo event information page for reserved table packages says a $5,000 donation gets the buyer a table for eight, some Friends of the NRA merchandise and a choice of a Daniel Defense AR-15-style rifle or a shotgun.

"What happened to love thy neighbor? Is that not a thing here? The specific gun that they are giving away in this, what if that falls into the hands of another angry 18-year-old?" Cross said, referring to the Uvalde gunman who used a Daniel Defense firearm. "Then it could be your children that are at risk and we would stand with you. I am just asking that you postpone it. Give us time to grieve. We are going through enough already."

Friends of the NRA is affiliated with the NRA but is a separate entity. According to its website, it is a fundraising program under the NRA Foundation and promotes shooting sports.

Sandy Steubing, a Hondo resident and volunteer with the the event, told the council: "All the Friends of NRA Foundation does is raise funds in furtherance of their charitable and educational mission."