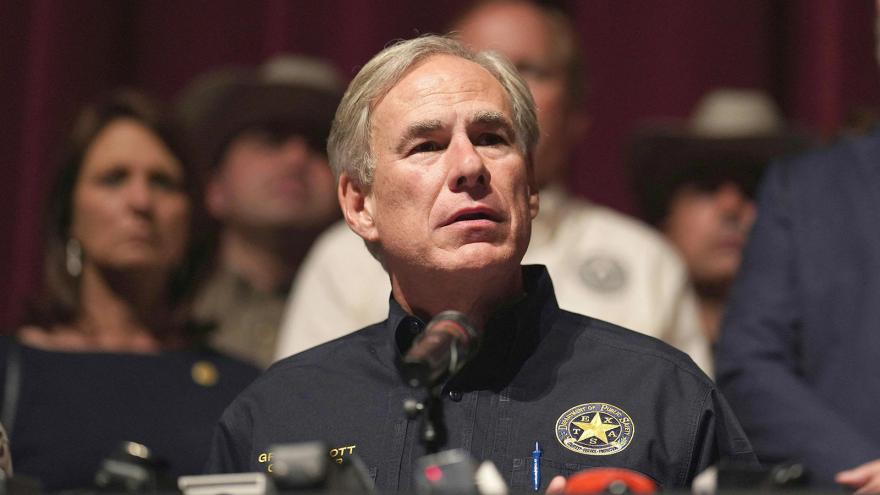 (CNN) -- Texas Gov. Greg Abbott is facing sharp criticism for citing gun violence in Chicago, New York and Los Angeles when pressed about gun control legislation after an 18-year-old gunman killed 21 people at an elementary school in his state.

Abbott, a Republican, suggested that tightening gun laws would not prevent mass shootings because there are still high rates of gun violence in states that have done so.

"I hate to say this, but there are more people shot every weekend in Chicago than there are in schools in Texas. And we need to realize that people who think that, well maybe if we just implement tougher gun laws, it's gonna solve it," Abbott said. "Chicago and LA and New York disprove that thesis. And so, if you're looking for a real solution, Chicago teaches that what you're talking about is not a real solution. Our job is to come up with real solutions that we can implement."

Abbott also didn't acknowledge that 60% of guns recovered in Chicago, for example, are purchased in mostly Republican states with looser gun laws, like neighboring Indiana, according to city data. Illinois requires a permit and background check to purchase firearms and Chicago prohibits the sale of assault rifles.

"Gov. Abbott is engaging once again in misdirection and race-based fearmongering to justify his regrettable opposition to an assault weapons ban," Marc Morial, president of the National Urban League, told CNN. "Considering that Texas suffers a higher rate of gun deaths than Illinois year after year, Gov. Abbott should join that effort instead of demonizing the neglected communities that suffer the worst consequences of weak gun laws."

Gun violence experts also say the comparison is unreasonable because the nature of gun violence in cities like Chicago is different than the Texas elementary school shooting. Recent shootings in big cities, they say, are more targeted.

Jonathan M. Metzl, professor of sociology and medicine, health and society at Vanderbilt University, said Chicago's gun violence is a result of systemic issues, including poverty, housing insecurity and gangs. School shootings like the one in Uvalde, however, are linked to the availability of guns and loose restrictions on age and public carry, he said.

It's a "complete racial stereotype" for Republicans to consistently name Chicago, which is majority Black and Latino, every time there is a gun control debate, Metzl said.

"It's a time-tested dog whistle on the right," he said. "He's (Abbott) playing to his base with that."

Tristan Bridges, a sociologist at the University of California Santa Barbara, said Abbott is "individualizing" mass shootings by saying they are the result of evil or mental illness and then suggesting that Chicago has a widespread problem.

"When looking at the school shooting that happened in his backyard, he took a bad apple approach," Bridges said. "But when talking about Chicago he (implies) that it's a rotten orchard. And that is racist."

Chicago Mayor Lori Lightfoot called it a "long-standing Republican trope" to criticize Chicago. Illinois Gov. J.B. Pritzker, a Democrat, also rejected Abbott's comparison. "You are lying about Chicago and what actually perpetuates gun violence," Pritzker wrote on Twitter. "The majority of guns used in Chicago shootings come from states with lax gun laws. Do better. You have 19 kids and two teachers who deserve our best."

Some leaders said the Texas governor's mention of shootings in the nation's three biggest cities was a distraction from introducing real solutions to gun violence in Texas. Several other mass shootings have happened in the state in recent years, including the El Paso Walmart shooting in 2019, the Santa Fe High School shooting in 2018 and the Sutherland Springs church shooting in 2017.

NAACP President Derrick Johnson said gun violence in other cities is irrelevant to the elementary school shooting in Texas. The priority, he said, should be keeping citizens safe at school, work, places of worship and the grocery store.

"We need to stay focused on the issue and not allow divisive and racist comments to take away from the dominant narrative," Johnson said. "We need common sense gun control."