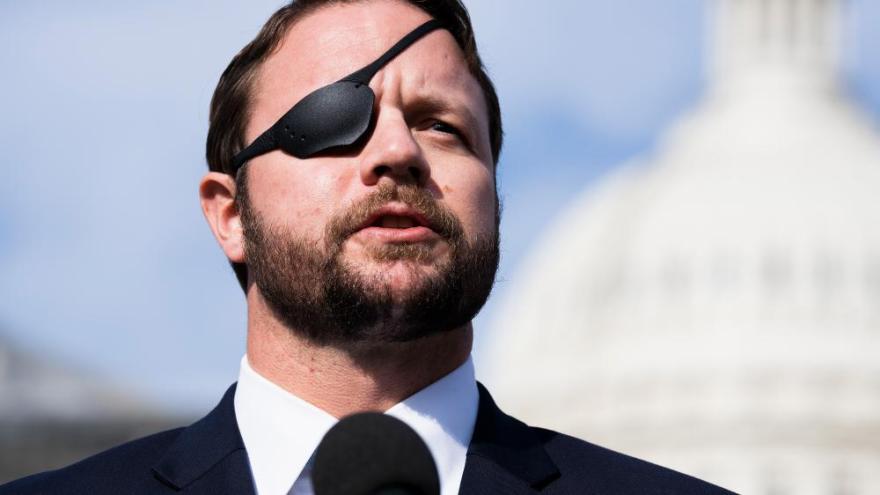 Crenshaw told CNN's Jake Tapper on "State of the Union" that the search of Trump's Mar-a-Lago home in connection with an investigation over mishandling of classified documents, reflects "a long history of loss of credibility" at the DOJ while conceding that possessing classified documents outside a secure facility was "wrong."

"You've seen (Republicans) coalesce around this one because it does seem unjust, and there does seem to be a long history of loss of credibility at the Department of Justice at the hands of the Democrats, and I think people are rightfully frustrated about that," Crenshaw said.

The FBI's search of Trump's compound in Palm Beach, Florida, came after a US magistrate judge signed off on a search warrant for the home. The Justice Department removed 11 sets of classified documents from Mar-a-Lago, according to court documents. The inventory showed that some of the materials recovered were marked as "top secret/SCI," which is one of the highest levels of classification.

On Thursday, the magistrate judge said he plans to unseal portions of the affidavit the DOJ used to obtain the search warrant. The Justice Department had argued against the release at Thursday's hearing, acknowledging the calls for transparency but noting that there was "another public interest" in protecting an ongoing criminal investigation from outside influence.

Crenshaw suggested Sunday that Trump's role as a former president and potential future presidential candidate should have been considered before the search was signed off on.

"When you're going after an ex-president who may run again ... this is automatically political," he said. "You cannot separate the legal aspects of this from the political aspects of it. You can't. And it doesn't seem to me like they've acted responsibly as a result."

Crenshaw also criticized Republicans who have attacked or threatened violence on law enforcement officers in the wake of the FBI's search, calling it "completely wrong" and adding that "99% of Republicans are not on that train."

Calls within the GOP to "defund the FBI" have ramped up since the Mar-a-Lago search, signaling Trump's grip on the party. Reps. Marjorie Taylor Greene of Georgia, Lauren Boebert of Colorado, and Paul Gosar of Arizona have each posted the sentiment on their social media accounts, and Greene is selling $30 hats and T-shirts with the slogan.

And New York congressional candidate Carl Paladino, whose campaign has been endorsed by House Republican Conference Chair Elise Stefanik, said in a radio interview that Attorney General Merrick Garland, who leads the DOJ, "probably should be executed." (He later clarified that he was "just being facetious.")

CNN reported earlier this month that the FBI has been investigating an "unprecedented" number of threats against bureau personnel and property in the wake of the search. Days after the search, a man who was believed to be armed with an AR-15 rifle and a nail gun tried to breach the FBI's Cincinnati field office. He was killed hours later after a standoff with authorities.

Meanwhile, in a separate Sunday appearance on "State of the Union," House Intelligence Chairman Adam Schiff said he still has not received a damage assessment or a classified briefing from the intelligence community after his request last week following the search of Trump's home.

"I assume that is being undertaken, and I have every expectation that it will be shared with us. So I look forward to that," he told Tapper.

Schiff and House Oversight Chairwoman Carolyn Maloney had made the request to Avril Haines, director of National Intelligence, according to a letter dated August 13 that was obtained by CNN.

Schiff, who also serves on the House select committee investigating the January 6, 2021, attack on the US Capitol, said he was "encouraged" to hear former Vice President Mike Pence suggest last week that he might be available to testify before the panel if invited.

"I hope it meant what it sounded like it meant. We have been in discussion with the vice president's counsel for some time. So he knows of our interest in having him come before us," Schiff said. "And I am confident that if he is truly willing, that there was a way to work out any executive privilege or separation of powers issues. There is, of course, nothing precluding the vice president should he decide to come before Congress, and I would hope given the severity of the issues we're addressing here and attack on our capital, and attack on our very democracy, that he would be willing to come in."

Pence, who was in the Capitol on January 6 for a joint session of Congress to certify Joe Biden's electoral victory, told a gathering in New Hampshire on Wednesday, "If there was an invitation to participate, I would consider it."

But a person with knowledge of Pence's thinking cautioned against reading too much into his remarks, noting that the former vice president would have serious constitutional issues about appearing before the January 6 panel.