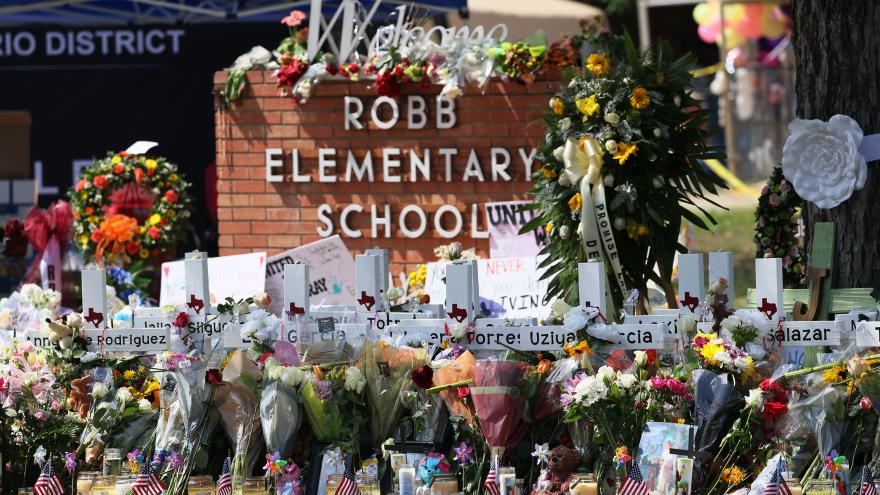 (CNN) -- Two officers with the Texas Department of Public Safety who were at the scene of the Uvalde school massacre have been suspended with pay and referred for formal investigation amid an internal review of law enforcement actions that day, the agency said Tuesday as students in the shaken community returned to school for the first time since the attack.

The two, along with three of their colleagues whose actions also will be probed by the Texas DPS inspector general, are the first officers whom the agency has said it's identified as part of its review of the response to the Robb Elementary School shooting that left 19 students and two teachers dead. It's not clear what actions by the officers prompted the escalation; none has been identified publicly.

Meantime, Texas DPS has authorized its officers "responding to an active shooter at a school ... to overcome any delay to neutralizing an attacker," according to a July letter to staff from Director Col. Steven McCraw that was released Tuesday.

The change follows intense public scrutiny and anger over the broad law enforcement response to the May 24 massacre, when several agencies waited for more than an hour before a team shot and killed the teenage gunman in a classroom.

Ninety-one Texas DPS responders were among 376 law enforcement personnel from 23 agencies at Robb Elementary that day, according to the agency's own tally cited in an investigative report by a Texas House of Representatives committee. Texas DPS officers, along with those from Uvalde city and school district police forces, were among the first at the scene, and only one other agency -- US Border Patrol -- had more people at the school than Texas DPS.

"In July, DPS announced the formation of an internal committee" to review is officers' actions, agency spokesperson Ericka Miller said Tuesday in a statement. "Five DPS law enforcement officers have now been referred to the Office of Inspector General where a formal investigation into their actions that day will take place. Thus far, two of those five officers have been suspended with pay pending the outcome of the (office's) investigation."

Committee members have aimed to "determine if any violations of policy or the Advanced Law Enforcement Rapid Response Training doctrine occurred," McCraw wrote July 20, referring to a widely accepted professional protocol that prioritizes the rapid and violent, if necessary, confrontation of spree shooters.

The actions of every law enforcement officer who responded to the Robb Elementary carnage also are the subject of a separate criminal investigation by the Texas Rangers, a unit of Texas DPS. That probe will continue until the Uvalde district attorney "is satisfied that she has enough information to assess whether there is criminal culpability by any of the responding officers," McCraw wrote in July.

Prosecutor Christina Mitchell Busbee will charge anyone who has committed a crime at Robb Elementary, including law enforcement officers, she's said. "I have no hesitancy to seek an indictment on a law enforcement officer for a criminal offense, when appropriate, under the laws of Texas," she told CNN in late July.

McCraw initially pinned the delayed response to the Robb Elementary shooter on then-Uvalde school district police Chief Pedro "Pete" Arredondo, who McCraw said was acting as the incident commander. Arredondo has said repeatedly he was not commanding officer that day, though he wrote the school's active shooter policy, including himself as incident commander, the state House report revealed. Arredondo was fired last month by the district.

"In public testimony before the Senate Committee to Protect Texas, I stated that the law enforcement response to the active shooter attack at Robb Elementary School was an abject failure," McCraw wrote in his July letter to "fellow employees." "Every agency that responded that day shares in this failure, including DPS."

McCraw in the same message announced what he called an "addition" to the Texas DPS shooting response policy. "When a subject fires a weapon at a school he remains an active shooter until he is neutralized and is not to be treated as a 'barricaded subject,'" he wrote.

First responders at Robb Elementary "lost critical momentum" by treating the situation as a "barricaded subject" scenario, which calls for a more measured response compared to an active shooter, the state House report found.

Texas DPS also is "in the process of purchasing 'go bags' containing breaching equipment and ballistic shields for all DPS officers," McCraw added in his letter.

As students went back to classrooms Tuesday for the first day of the new school year, many parents remained angry at the lack of accountability for what happened May 24 and with law enforcement for their actions that day.

Brett Cross, who had been raising nephew Uziyah Garcia -- who was slain -- and has four other children in the school district, has struggled to decide whether to send them back to school in person, he told CNN.

"We've already seen that (law enforcement officers) didn't do their job. So, how are we supposed to trust that?" he said last week. "I don't feel like my kids are safe."

Third-grader Zayon Martinez was too traumatized by the shooting, during which he hid under a desk, his father said.

"He said, 'It doesn't matter. They're not gonna protect us.'"

The head of the union that represents law enforcement officers across the state, including some in Uvalde, has called for an independent probe of Texas DPS in light of the school shooting.

"I don't know that we can trust them to do an internal investigation," Charley Wilkison, executive director of the Combined Law Enforcement Associations of Texas, said in August, when a CNN review of body-worn camera footage revealed Texas DPS officers were at Robb Elementary earlier than publicly acknowledged by its leaders.

Texas DPS "was fast to wash its hands, to point fingers and to make sure that the general public, particularly the elected officials, knew that they were spotless, blameless and that this was a local problem," Wilkison said. "No one created this environment, (in) which everyone's to blame except DPS. No one did that except them."

Texas DPS also has been criticized for inaccurately framing police efforts at the massacre scene as heroic before walking back the assertions as key facts about the response emerged.

CORRECTION: This story has been updated to clarify the type of review under way by the Texas Department of Public Safety. It is an internal investigation.