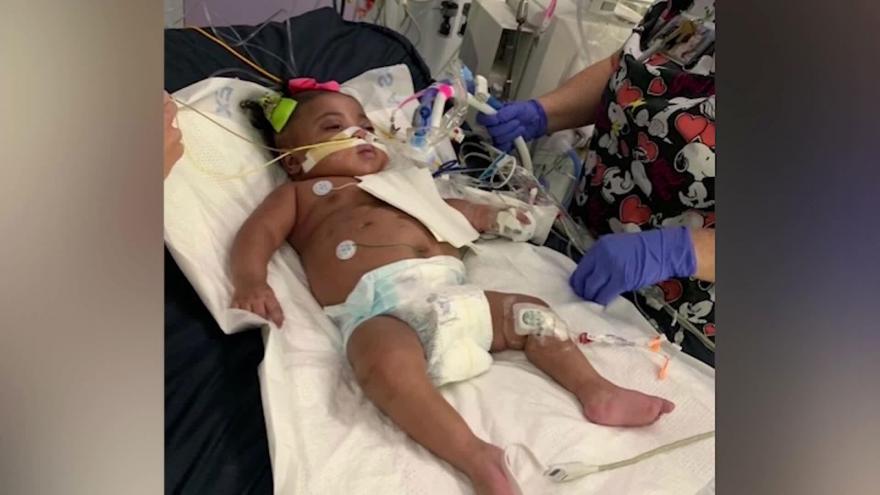 (CNN) -- A Fort Worth, Texas, hospital must keep an infant with a rare heart defect alive while an appeals court decides the girl's fate, her mother said Monday as she seeks a doctor willing to perform a tracheotomy on the 11-month-old.

An appeals court Thursday denied a motion for a temporary injunction, filed by Tinslee Lewis' family, that seeks to stop the hospital from removing the girl from life support. The following day, however, another state appeals court ruled the hospital must keep the baby on life support, Lewis family attorney Joe Nixon told reporters.

The hospital had welcomed the Thursday decision, with a spokeswoman saying the ruling restored the Cook Children's medical staff's ability "to make the most compassionate and medically appropriate decisions for Tinslee as she struggles in pain to survive each day."

Tinslee was born with Ebstein's anomaly, which means one of her heart's main valves is malfunctioning. She suffers from chronic lung disease and severe chronic pulmonary hypertension. The hospital planned to remove her from life support after her physicians said she is in pain and her condition is irreversible, Cook Children's Health Care System spokeswoman Winifred King has said.

Hannah Mehta, executive director of Protect TX Fragile Kids, said at Monday's news conference she has spoken to surgeons who say Tinslee's case is not hopeless and that there are viable treatment options for the girl, beginning with a tracheotomy.

Mehta took issue with the hospital's assertion that no other hospitals will treat Tinslee, arguing that potential doctors received information -- including diagnostic imaging of Tinslee's organs -- that was more than three months old, making it difficult to reach informed decisions.

The girl's mother, Trinity Lewis, has been asking doctors to perform a tracheotomy on her daughter since July, to no avail, she told reporters, adding she's been told Tinslee might be able to go home one day if she undergoes the procedure.

Wearing a Tinslee Strong T-shirt, the mother told reporters she wants Tinslee transferred from Cook Children's Medical Center to a facility that will help her transition to "palliative care with home health support," she said. Palliative care is a branch of medicine that treats patients' pain and strives to improve their quality of life.

"I definitely respect Tinslee's physicians' abilities," the mother said, "but I have not had a voice in her current plan. I know that my daughter's medical needs are complex, but I am praying for someone to give her a chance."

Trinity Lewis has been visiting her daughter every day and has seen improvements in her condition, she said. Tinslee's lungs are clearer and she's breathing more easily, and the girl has been indicating she wants to be picked up, she said.

During a recent visit, Nixon said, the youngster was enjoying watching "Puppy Dog Pals" and became upset when it was turned off.

"I fully believe Tinslee's life is in God's hand and that she deserves a fair and fighting chance at life, however long God has for her," Trinity Lewis said. "My fear is them pulling the plug on her without me."

That can't happen before the latest court challenge is decided by the courts, Nixon said. Cook Children's Medical Center must provide the girl with life-sustaining care until the courts make their final decision or issue other orders, he said.

The family's legal brief is due January 23, Nixon said. The hospital will file its own brief, he said, and he expects amicus briefs -- aka "friend of the court" briefs, which are filed by outside interests -- to arrive from around the country.

"We're all in danger here if this law stays in place because we've taken away the decision of life that belongs to the patient or the patient's family and given it to a nameless, faceless committee. We don't want that," the attorney said.

Before denying the family's appeal Thursday, Chief Justice Sandee Marion of the state's Fourth District Court of Appeals had ruled in the family's favor, granting a temporary restraining order against the hospital in November and extending the order last month.

There was a reasonable expectation, Marion determined, that the family could find a physician to take over her treatment, CNN affiliate KTVT reported.

Cook Children's, which says it has cared for Tinslee her entire life, has reached out to more than 20 facilities from Los Angeles to Philadelphia in hopes of finding a hospital to take over the infant's care, said King, the spokeswoman for the health system. The hospitals agreed with the assessment of Cook Children's and said there was nothing more they could do, she said.

"Tinslee is suffering, and she is in pain every single day," King said last week. "We know that this is very difficult for this family who had high hopes that she would get better, but the truth is that she is not going to get better."

The girl takes painkillers and sedatives and is paralyzed. She suffers from severe sepsis and appears to be in pain when nurses change her diapers and turn her over to avoid bed sores, King said. Doctors had to sedate and paralyze the infant to keep her from pulling at the lines connected to her ventilator, the hospital said.

"All the things we have to do to keep her alive and keep her well is causing her pain and causing her suffering and we don't want to do that any longer. We want to ease her pain. We believe that we can do that if we allow her to naturally and peacefully transition," King said last week.