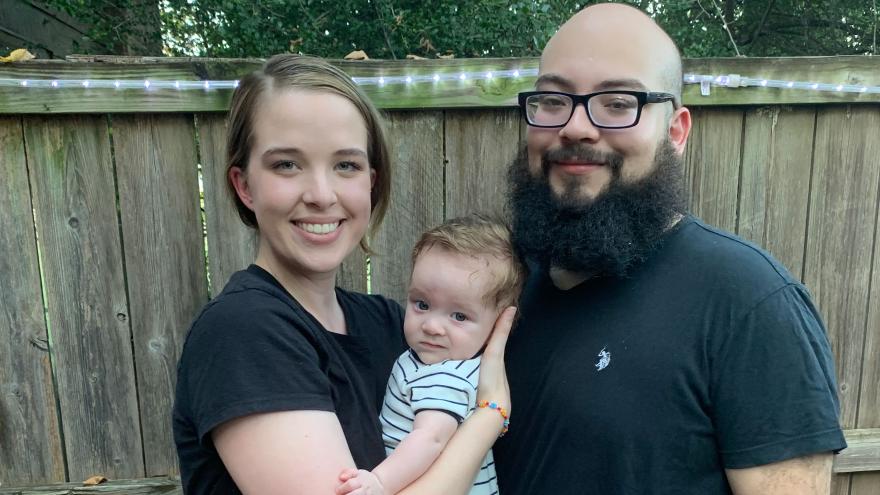 (CNN) -- A Texas couple who landed themselves a rare night out with friends says it was cut short when the restaurant kicked them out for wearing face masks, which they say they wore to protect their immunocompromised 4-month-old son.

Natalie Wester and her husband, Jose Lopez-Guerrero, joined a group of friends at a restaurant and bar in Rowlett, about 20 miles northeast of Dallas, on September 10.

"We are new parents and in the middle of a pandemic, we don't really get out a whole lot," Wester told CNN. "But that Friday night, my mom happened to be available to watch our son. ... Living in a pandemic, being isolated and away from others is a big deal for our mental and social health."

Their infant has cystic fibrosis, they said, so they have taken precautions to stay safe and do what's best for their family, and that includes wearing a face mask in public except when drinking or eating.

But the restaurant they visited, Hang Time Sports Grill & Bar, has a no-mask wearing policy, according to its owner, whom CNN affiliate KTVT identified only as Tom. Wester said she was not aware of the policy.

CNN reached out to Hang Time Sports Grill & Bar on Monday by email and phone but has not heard back.

"About 30 minutes in, our waitress comes over and she sits down next to me and she's like, 'Hey, so our manager is over there in the kitchen, and he is not as nice as I am so I came over here to talk to you and unfortunately, this is a political thing, but our manager does not believe in the mask. He's tired of being told what to do by, you know, politics in the country, and so you're going to need to take the mask off," Wester said.

On March 10, Gov. Greg Abbott lifted the mask mandate in Texas and said businesses of any type were allowed to open at 100% capacity. On a county level, though, a judge cannot put anyone in jail for not following Covid-19 orders and no penalties can be imposed for people who do not wear masks, he said.

"If Covid hospitalizations in any of the 22 hospital regions in Texas rise about 15% of the hospital bed capacity in that region for seven straight days, then a county judge in that region may use Covid mitigation strategies in their county," Abbott said.

"I spent my money on this business, I put my blood, sweat and tears in this business and I don't want any masks in here," Tom told KTVT on camera. "I feel the overall reaction with the masks is ridiculous in the United States right now."

Lose the mask or lose service

The US Centers for Disease Control and Prevention recommends wearing a mask indoors in public even for vaccinated people if they are in areas of high transmission or if they or a member of their household has a weakened immune system. It encourages unvaccinated people to wear masks in indoor public settings until they are fully vaccinated.

When Wester entered the restaurant, she said, she remembers being asked to take her mask off but she assumed it was so the hostess could match her face to her ID.

"Upon us walking in the restaurant, there was a band playing, and it was really loud," she said. "And the hostess, she had asked for our IDs and she did mention something about removing our masks, but I honestly just thought it was for checking our IDs. And again, I couldn't even hear her that well."

"So when they (the couple) put their masks on the other night, they were reminded that they were asked at the front to take it off and they didn't want to, so we asked them to leave," Tom told KTVT.

After the waitress came over to relay the manager's message to remove their masks, Wester said, she was "speechless."

"You know, I've never been told that before, especially not in Texas. It's usually like the opposite way around," she said.

Wester said she explained they were paying customers who had already bought food and that she had a child at home with cystic fibrosis, but the waitress didn't budge.

"And you know, even though both my husband and I are vaccinated, anytime we're able to leave (home) we put on a mask, even if it's just, like, walking towards people, if we're out and about. You know, obviously, it's not like a perfect system -- you have to take your mask off to eat, maybe to take photos, things like that, but we do our best," she said she told the waitress.

Wester said she didn't feel comfortable removing her mask, to which the waitress said if that was the case, she was going to have to close her check.

"I want to respect a small business," she said. "And I know that right now in Covid and with the economy, it is very hard. But I don't think that the way that he's (Tom) handling his business is very professional, and it's not very hospitable, either."

The couple has been out alone only a few times since their son was born, Wester said. The experience has made them feel it's not worth the hassle of going out again, she said.

"You know, trying to not only take all the steps to get a babysitter or have my son be watched -- that's a step in itself -- but then going out and having to deal with people like this who are anti-maskers ... and who are making it like a really political issue when it should be a science issue," she said.

"It's kind of just made me realize that maybe I shouldn't go out anymore," she said. "At least not here in Texas. Not right now. It's just it's not a good environment."

The US Department of Justice outlines federal protections for Americans based on race, color, sex, disability, religion, familial status, national origin and citizenship, but it doesn't outline any protections specifically regarding face coverings.

For the most part, as far as federal law is concerned, private businesses can impose whatever rules on their customers that they want to, as long as they don't discriminate on those outlined protections, University of Houston Law Center associate professor Emily Berman told CNN. Generally, businesses may be able to ban the use of masks, with two important caveats.

"First, if someone has a certain physical condition that makes them particularly vulnerable to Covid-19 (or lives with someone particularly vulnerable to Covid-19), that condition might be considered a disability," she said. "If so, there is an argument that forcing that person to take off a mask or leave the premises might constitute discrimination on the basis of disability."

"Second, state and local governments often expand the list of categories against which discrimination is prohibited," she said. "So things like pregnancy, transgender status, marital status, etc. get protection in certain jurisdictions, which means different rules might apply in different places."

If there is a bar on discrimination on the basis of what someone wears, this could apply here, according to Berman.

"For better or for worse, sometimes the law does not prevent people from doing things that are not in the interests of society as a whole," she said.

Wester doesn't plan on taking legal action, she said. Her goal in sharing her experience was to "encourage the owner to look into his policies and also encourage his customers to maybe take a second look at who they're giving their business to."